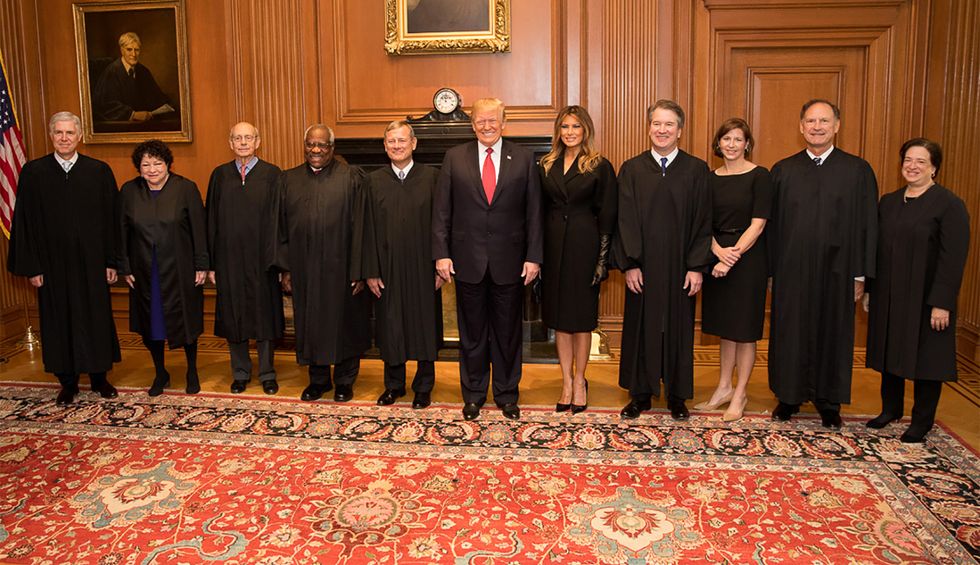 One of the main reasons for President Donald Trump’s unwavering popularity with the Christian right is judicial appointments: in addition to bringing a long list of socially conservative judges to the lower federal courts, Trump has so far appointed two U.S. Supreme Court justices (Neil Gorsuch in 2017, Brett Kavanaugh in 2018). The Center for Responsive Politics’ Anna Massoglia, in a January 2 article for the Center’s Open Secrets website, examines the “secretive network” and “dark money” associated with Trump’s High Court picks.

At the “crux” of the “secretive network,” according to Massoglia, is the Federalist Society’s Leonard Leo, who has been serving as a legal adviser for Trump. Leo, Massoglia notes, “helped shepherd Trump’s Supreme Court picks through the confirmation process” and “holds leadership positions with multiple groups in the network.”

An important part of the network, Massoglia observes, is the “dark money” group the Judicial Crisis Network, which she says “operates as the preeminent vehicle for deep-pocketed donors to funnel millions of dollars to support or oppose judicial nominees in Supreme Court confirmation fights” and “has served as the public face of the network while a web of secretive groups operate behind the scenes.” In 2017, according to Massoglia, the Judicial Crisis Network “spent $10 million to boost Neil Gorsuch’s Supreme Court confirmation, mostly on TV ads.”

“The bulk of Judicial Crisis Network’s funding over the past decade came from the Wellspring Committee, a secretly-funded group that served as a long-time linchpin of the opaque network before shutting down at the end of 2018,” Massoglia explains. “Wellspring took in $2.3 million during its final year, distributing most of that through grants before shutting down completely at the end of 2018.”

Before shutting down, Massoglia notes, Wellspring “distributed its remaining $34,777 to Judicial Crisis Network.”

“In addition to shuffling money among interlocking groups tied to Leo,” Massoglia notes, “nonprofits in the network also shelled out millions of dollars to consultants and other dark money groups — many of which supported Kavanaugh’s confirmation to the Supreme Court.” For example, the Leo-associated group America Engaged “funneled another $3 million to the Koch Network’s Freedom Partners,” according to Massoglia.