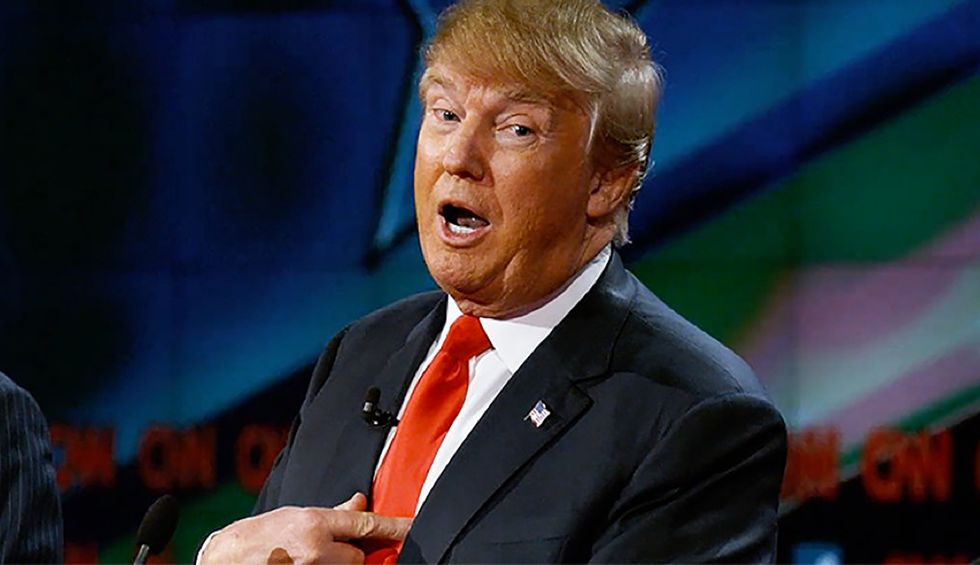 Wednesday morning was buzzing with historic news and revelations of scandal. and none of it was good news for Donald Trump. Most prominently was the House of Representatives voting to send the Articles of Impeachment to the Senate. And none too soon. The American people's desire to see Trump removed from office is growing. But there was also new reporting tying Trump to the nefarious activities of Rudy Giuliani associate Lev Parnas, and the troubling surveillance of U.S. Ambassador Marie Yovanovitch.

Trump has been actively employing petty tactics he picked up while hosting his reality TV game show. He's been counter-programming events that he fears will reflect poorly on him. So on Tuesday evening he held another of his cult rallies to coincide with the Democratic primary debate in Iowa. And on Wednesday he scheduled a signing ceremony for what is being called "Phase One" of a trade deal with China. Never mind that no one has seen the contents of the alleged deal. Trump was only concerned with trying to steal attention away from the impeachment vote in the House. He failed at both of these cynical ploys.

Trump's flagrantly manipulative signing ceremony was a wholly vacant waste of time that produced nothing newsworthy. Trump spent a full half hour thanking the shameless toadies in the room, including members of his Cabinet and his son-in-law, Jared Kushner. It was a such a painfully boring presentation that even Fox News cut away from it. Which is a shame, because had they stayed tuned they would have seen Trump planting a big fat wet kiss on Fox host Lou Dobbs (The video wouldn’t load in dKos, but you can see it here):

"A man who always liked me, because he's smart, so smart. The great Lou Dobbs. You know, at first he said, 'He's the best since Reagan.' Then he got to know me more and more and he said, 'He's even better than Reagan.' [...] He said 'He's the greatest of them all.' I said 'Does that include Washington and Lincoln?' And he said 'Yes.'"

Isn't that sweet? Trump recites some nauseatingly worshipful praise about himself that he attributes to one of his biggest fans on the network that serves as his Ministry pf Propaganda. Dobbs surely has a deep infatuation with Trump and an opinion that is shared by almost nobody outside of State TV. In fact, historians ranked Trump dead last out of all forty-five presidents. Lincoln and Washington came in first and second respectively. Trump nemesis Barack Obama placed eighth. And even Bill Clinton, who was also impeached, was respectable at thirteen.

Trump also landed at the bottom of the heap in a ranking based on Gallup approval polls going back to 1937. He has never managed to hit 50% (his highest mark was only 46%). Both Obama and Clinton top out much higher, at 69% and 73% respectively. So Trump is the least popular president in history according to both historians and the American people.

Yet Dobbs - and Trump himself - have much more positive opinions that must be based on their mutual admiration society. Trump has long been enamored of Dobbs, whose advice he often seeks on official government policies. In the new book, "A Very Stable Genius," there is a revealing illustration of Trump's dependence on Dobbs, particularly on matters involving immigration:

“The president would routinely call [former Homeland Security director Kirstjen] Nielsen to say a version of ‘Did you see Lou Dobbs? You’re totally f*cking embarrassing me. This is my issue!’… Sometimes, Trump would refer to one of Dobbs’s proposals and say, ‘Kirstjen, just do it. Just do it.’ ‘But we can’t do it,’ Nielsen would explain, usually because whatever Dobbs had uttered on TV was against the law.”

That's how far into the abyss of ignorance Trump has driven this country. He relies on a "shadow cabinet" of Fox News flunkies like Dobbs, Sean Hannity, Laura Ingraham, and others, including legal hacks like Alan Dershowitz and Mark levin. So if you wondered how things got so bad, you now know that you can blame it on both Trump and Fox News. There isn't much we can do about Fox, but we can get rid of Trump this coming November, if we work for it.