The Trump administration misled the country by saying there were 'no casualties' from Iran attack: report 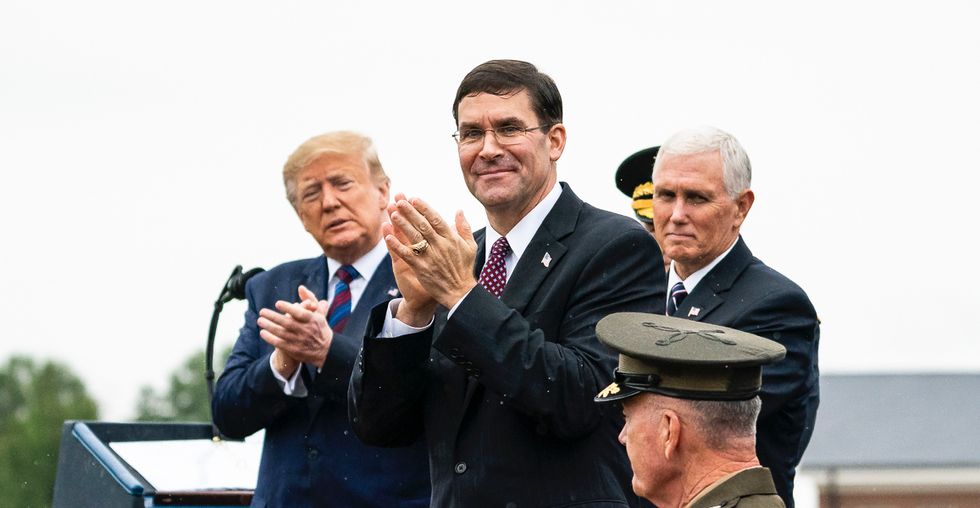 After Iran targeted missiles at U.S. military personnel in Iraq in retaliation for the kill of a top general, the Trump administration declared that there were no casualties from attack, and — at least for the time being — it allowed the conflict to de-escalate.

But on Thursday night, a new report from Defense One revealed the initial claim that there were "no casualties" from the attack was false. It reported that 11 U.S. troops were injured in the attack and taken to hospitals to be treated for "traumatic brain injury."

Col. Myles Caggins, a spokesman for Combined Joint Task Force-Operation Inherent Resolve, confirmed the outlines of the report to Defense One, acknowledging that "several [military service members] were treated for concussion symptoms from the blast and are still being assessed.”

He added: “Out of an abundance of caution, some service members were transported from Al Asad Air Base, Iraq to Landstuhl Regional Medical Center in Germany, others were sent to Camp Arifjan, Kuwait, for follow-on screening."

He seemed to try to suggest that the new facts were consistent with the administration's account, saying, "As previously stated, while no U.S. service members were killed in the Jan. 8 Iranian attack."

But in fact, Defense Secretary Mark Esper said the day after the attack: "Most importantly, no casualties, no friendly causalities, whether they are U.S., coalition, contractor, et cetera."

Since "casualties" refers to people both killed and injured in a war, this statement was clearly false.

Why does this matter? Arguably, it's a good thing that the severity of the Iran strike was downplayed because it allowed both sides to stand down and prevented the situation from spiraling further out of control. (Tragically, a plane headed to Ukraine — which included many Iranian passengers — was shot down by the Iranian military on the same night as the attack in an apparent accident in the fog of war.)

And yet it's vital that the American people can trust that the federal government is providing accurate information and not trying to spin the facts to fit the president's preferred narrative. The claim that there were no casualties from the Iran strike helped construct a narrative that the regime was intentionally trying to avoid injuring or killing Americans; many believed that the show of force from Iran was an attempt at a face-saving measure that would nevertheless not prompt more retaliation from Trump.

Yet the fact of the American casualties, and other details revealed by Defense One, indicate that this common interpretation of the strike is false. It explained:

Initial reports about the attack speculated that Iran had tried to avoid areas of the base that housed military personnel. But U.S. officials soon rejected that notion. In a Jan. 8 press conference, Joint Chiefs Chairman Gen. Mark Milley said, “The points of impact were close enough to personnel and equipment, so on and so forth, I believe, based on what I saw and what I know, is that they were intended to cause structural damage, destroy vehicles and equipment and aircraft, and to kill personnel.”

Still, several news organizations soon reported from Al-Asad that U.S. troops had been alerted to the attack hours in advance, and told to head for bunkers 15 minutes before the missiles began to strike. Many U.S. troops, however, manned exposed positions, including at least one group of drone operators who stayed in an above-ground building to get their drones aloft and avoid ground damage. The leader of an Army drone team told NPR that he was “knocked off his feet by the blast.” Others told the New York Times that missiles damaged the building they were in.

On Thursday, Pentagon chief spokesman Jonathan Hoffman declined to say what tipped off the Americans. He did deny reports that the warning came from somewhere besides the United States or Iraq.

In other words, we got lucky. Trump's bumbling into the conflict brought us extremely close to the brink of war, and it seems we were only saved from the carnage so far because fortunately, the Iranian attack failed to do more serious damage.