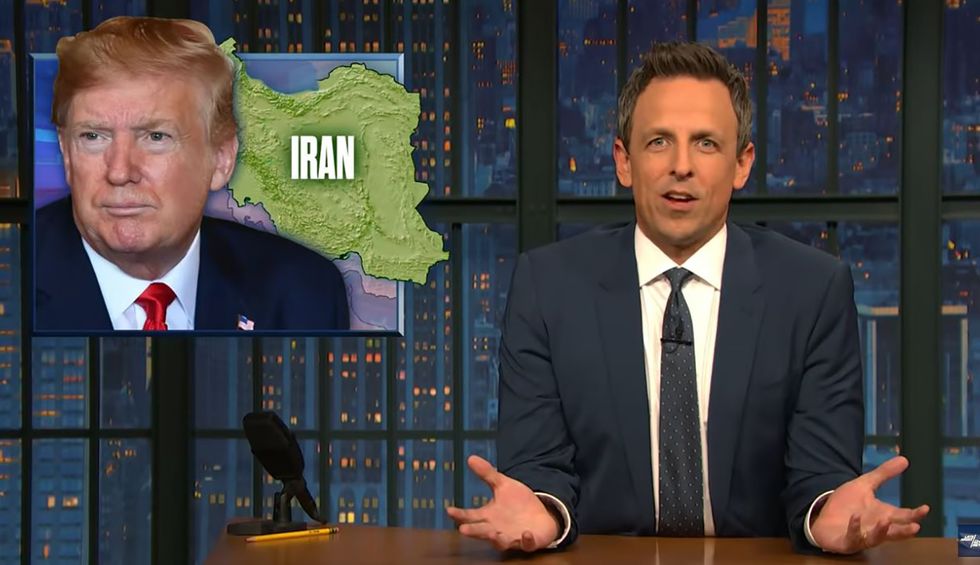 “Late Night” comedian Seth Meyers came back from the holiday break to a country on the brink of war. In his Wednesday night show, Meyers reviewed the “sniffling” and “stuttering” mess of President Donald Trump’s address to the nation.

The problems began when Trump entered the hallway on the second floor of the White House from the double doors of the Blue Room. Behind him was a flood of light that Meyers said looked remarkably similar to nuclear Mr. Burns glowing with radiation poisoning.

“And like Mr. Burns, Trump claimed to want peace, but the whole thing was incoherent and bizarre,” Meyers continued. “For example, after he descended from his blue tractor beam, he launched into the speech before he addressed the audience.”

Instead of opening his press conference by saying, “good morning,” Trump proclaimed Iran would never get nuclear weapons. Then told the press, “good morning.”

“And good morning to you?” Meyers asked. “It would be fun if Trump started every conversation like that. ‘As long as I’m president, Iran will never have a nuclear weapon. I’ll have a Filet-of-fish and six Big Macs.’ And if you were thrown off balance by Trump’s wild swings, from starting a conflict to claiming he stopped one, you’re not alone. Because Trump himself seemed off-kilter and had trouble reading the TelePrompter.”

Meyers played the clip of Trump struggling to say the word “tolerated,” instead pronouncing it “tolor-adeded.”

“Yes, tolaraddd,” Meyers said. “I love when he gets in trouble halfway through a word and then rather than just stop and reboot, reaches in his mind for what the rest of the word is. ‘Toleraded. Talleradded, Toblerone?’ Trump must have been blinded by that blue light. And it probably only got worse when the speech ended, and Trump had to go back through the doors and into the light again.”

Meyers described the speech as swinging “wildly” from “bluster to threats,” then flat-out lies. Since last week Fox News and the right-wing have tried to say that former President Barack Obama is to blame for the Iran attacks, saying he delivered cash to Iran for signing the treaty. In fact, the money was Irans, to begin with, and was held up in sanctions so the country couldn’t access it. The United States never gave Iran any money, that would require Congressional authorization.

Obama has been out of office for three years and pursued a peace treaty with Iran, something Trump has also criticized. So, it seems the right can’t decide whether Obama’s action or inaction was to blame.

“But it doesn’t matter to these guys,” Meyers said of the GOP members and Fox News hosts. “They’re obsessed with Obama.”

Meyers said that next, they’d blame Obama for telling Trump to breathe in through his nose like he’s about to go underwater.

Watch the hilarious video below: