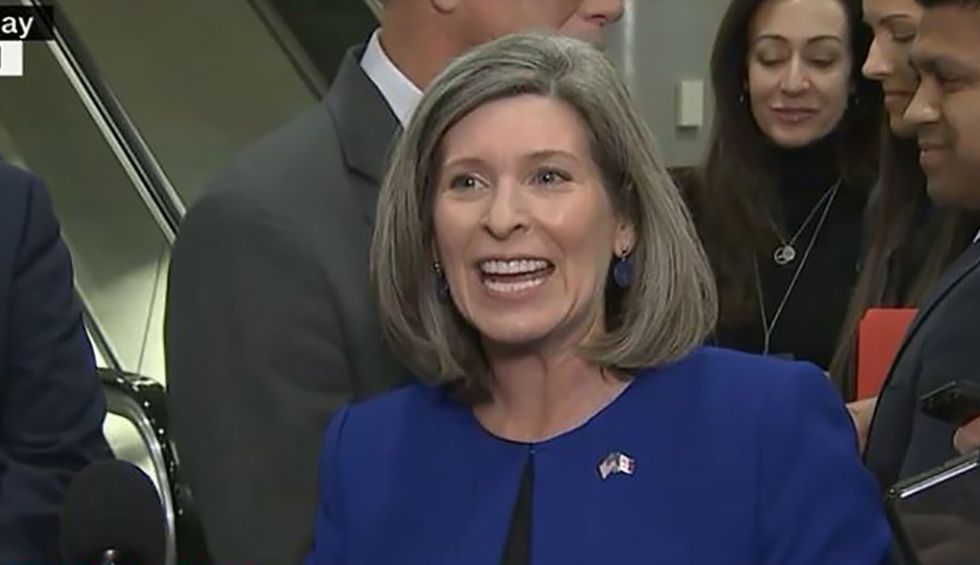 After President Donald Trump's legal team on Monday completed the second day of their impeachment defense—which largely consisted of attacks on former Vice President Joe Biden and his son, Hunter—Republican Sen. Joni Ernst told reporters that she is "really interested to see" how team Trump's performance at the Senate trial "informs and influences the Iowa caucus voters, those Democratic caucus-goers."

Ernst's remarks, which came just a week before the Feb. 3 Iowa caucuses, were widely viewed as an open admission that Trump's attorneys and the Republican Party are using the Senate impeachment trial as an opportunity to damage Biden at the polls.

"This is saying the quiet part out loud," tweeted MSNBC correspondent Garrett Haake, a sentiment that was echoed by others.

"Here is Joni Ernst screaming the quiet part into a bullhorn," said Kaili Joy Gray, executive editor of The American Independent, in response to the Iowa Republican's comments.

Ernst's comments run counter to the longstanding White House and Republican narrative that Trump's effort to pressure Ukraine to launch investigations—for which he was impeached by the House of Representatives last month—was a genuine attempt to root out corruption, not a politically motivated ploy to harm Biden in the 2020 presidential election.

"I was watching Elizabeth [Warren] and Bernie [Sanders] and Michael [Bennet] and Amy [Klobuchar] and they were really eyes wide open during that part of it," Barrasso told reporters, referring to Trump attorney Pam Bondi's presentation, which heavily focused on Biden an his son.

Sen. Chris Murphy (D-Conn.) said as he watched "Bondi and the other Trump lawyers spend most of the day savaging the Bidens (as expected)... it become crystal clear to me: Trump is trying to use the trial to do what Ukraine wouldn't—destroy his political rivals."