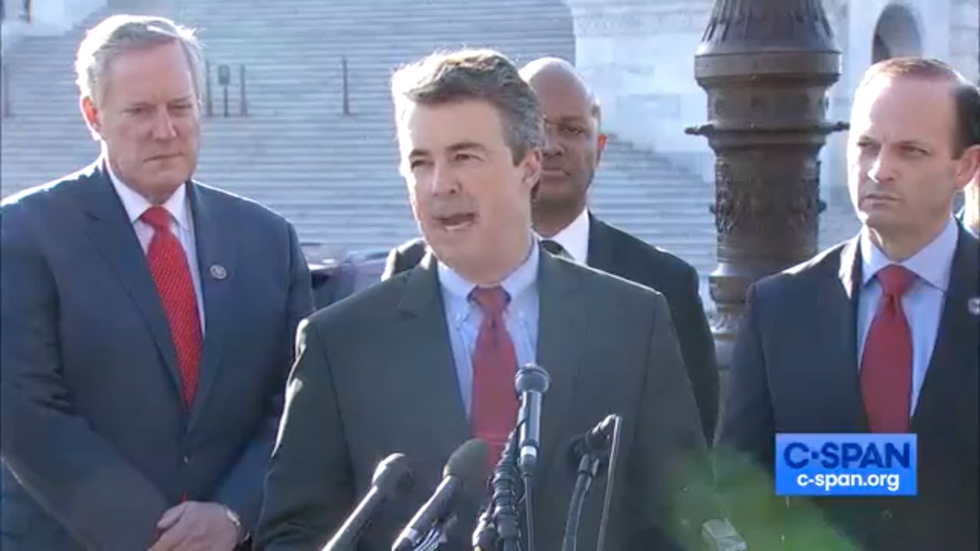 A group of Republican attorneys general sent a letter on Wednesday pleading with the Senate to reject the impeachment articles of President Donald Trump sent by the House.

They argued that both the articles of impeachment are "legally flawed and factually insufficient, as well as inherently destructive of separation of powers, the Senate should explicitly reject them to protect both the institution of the Presidency and the Constitution."

This partisan political effort undermines the democratic process, both now and in the future. The House unilaterally re-writes the constitution, without the people’s consent to amend it. It weaponizes a process that should only be initiated in exceedingly rare circumstances and never for partisan purposes. This purely partisan attack on President Trump will damage democracy in America in the worst possible way: it will forever weaken the separation of powers–the very edifice upon which our democracy stands.

A group of Democratic attorneys general replied to the letter, saying: “The people in these states deserve more than politicking and pandering from their state Attorneys General—and that’s clearly all this was."

And when the Republicans were faced with a simple question at a press conference from Courthouse News reporter Adam Klasfeld about the upcoming Senate trial, which most Republicans hope to keep short and free from any witness testimony, the Republican officials were stumped.

"You've all prosecuted a lot of cases," he said. "Have you ever prosecuted a case without witness testimony or discovery of evidence?"

At that question, all seven officials froze, apparently unsure of who should answer.

Eventually, one of them stood forward and criticized the Democrats for having a "fishing expedition" and not meeting the evidentiary standards. But he never answered the question, which goes to the central matter of why there should be testimony in the Senate trial, regardless of what the House did. Of course, Democrats do believe they met the standard necessary to impeach the president; they want more evidence and testimony because they're clearly aware that Republican senators haven't been convinced to vote to remove the president, and they want to make the case as clearly and thoroughly to the American people as possible.

Watch the clip of the press conference here.