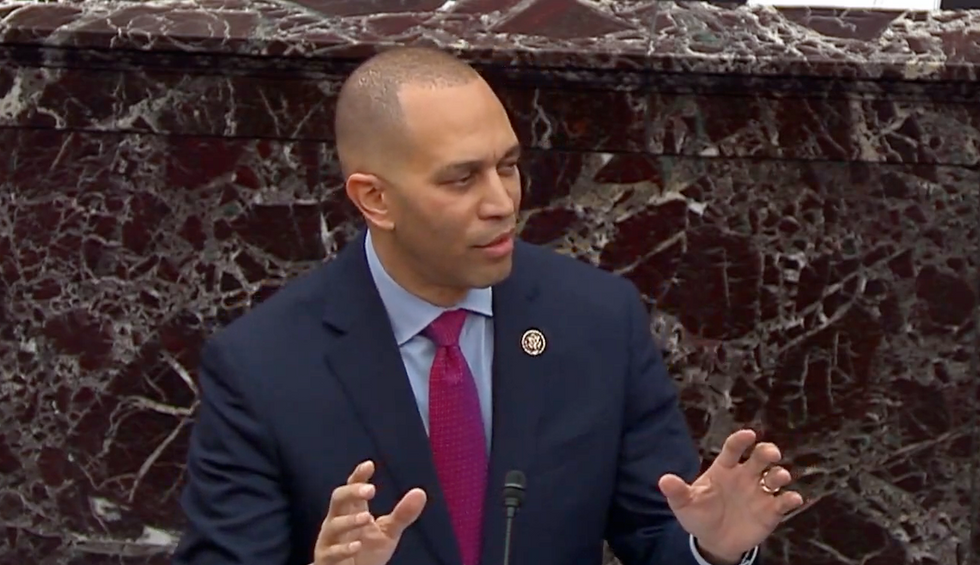 Stopped in a hallway outside the Senate chamber, Sen. Elizabeth Warren was asked what she’d seen that was “new.” Her immediate response — the presentation that had just finished from Rep. Hakeem Jeffries. Warren is right. The facts that Jeffries reviewed may have come from the House hearings, but what they revealed in his presentation placed a whole new light on a key element of Trump’s impeachment.

On Wednesday morning, Trump began his record day of tweets by simply tweeting “No pressure.” That claim, that the Ukrainian government did not feel pressured to give Trump the investigations he wanted, is critical to the case for Trump’s defense. And Jeffries’ presentation showed just how ridiculous that claim really is.

1) The White House meeting and military assistance were both vital to Ukraine's very existence. As a independent democracy.

2) The pressure to maintain a stable relationship with the United States was enormous, because that relationship is the most important connection Ukraine has, and the only partnership that can safeguard them against a serious Russian incursion.

3) When Rudy Giuliani approached incoming President Volodymyr Zelensky saying that he was Trump's personal attorney, Zelensky and team fended off the demands that were passed from Trump through Giuliani for months.

4) Behind the scenes Ukrainian officials scrambled madly to preserve the U.S. relationship without doing something they knew was wrong. They saw what Giuliani was doing, but in supporting corrupt figures from past Ukrainian governments, and smearing ambassador Marie Yovanovitch, but did their best to stay out of it.

5) Zelensky’s government understood what Trump wanted, but they knew that giving it to him risked losing the bipartisan support in the U.S. Congress that was vital to continued assistance from the U.S. So, as long as it was just Giuliani pushing them, they resisted.

6) Unhappy that Giuliani had not been able to get the investigations started, Trump assigned the “three amigos” to listen to Giuliani and support his play.

7) After Kurt Volker and Gordon Sondland talked with Giuliani, reinforced the demands, and made it clear that U.S. foreign policy had been subverted to support Trump’s personal goals, Zelensky could see that the only way to preserve any U.S.-Ukraine relationship in the short term was to go along with Trump’s demands.

8) Even so, Ukrainian officials didn’t come to this position willingly. They drafted a version of the announcement that they hoped would satisfy Trump without making enemies in Congress. But Trump’s team shoved it back and forced them to make it more explicit.

9) With Giuliani, Sondland, Volker and others all pounding the Ukrainian team for announcements of the investigations, Zelensky eventually folded and agreed to the CNN interviews. Sondland walked Zelensky through what he needed to say to Trump to please him.

10) The interviews were only stopped when Trump was pinned down by the whistleblower, congressional inquiries, and public knowledge that forced him to release the military assistance. Without the pressure of the pending aid package, Zelensky withdrew from the interviews.

When Rudy Giuliani pulled up at Zelensky’s door and represented himself as Trump’s personal attorney, Zelensky was able to resist responding to the demands passed to him. It wasn’t until Trump backed Giuliani with senior officials—until “everyone was in the loop”— that officials in Ukraine realized just how corrupt the U.S. had become. And Zelensky saw that, for the sake of his nation, he had no choice to bend to the immeasurable pressure being applied by Trump.