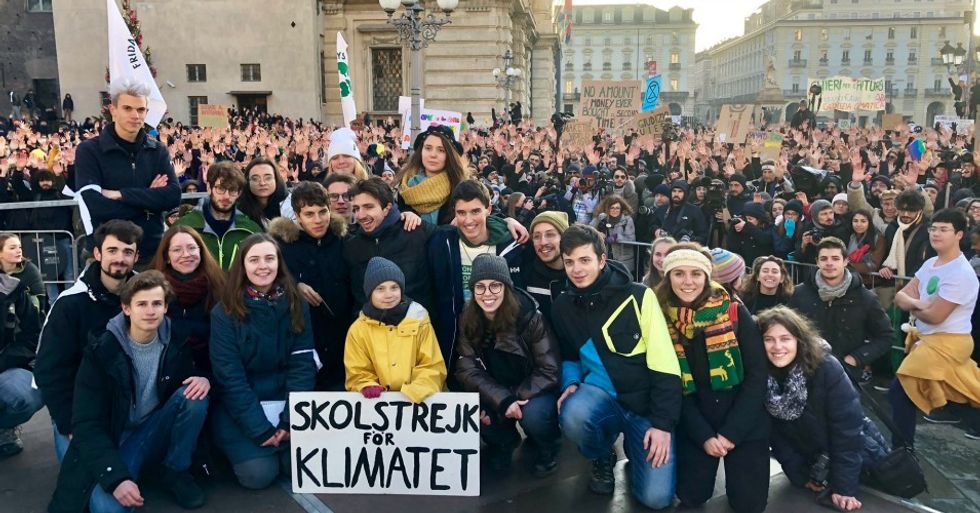 "History has not shown the corporate world's willingness to hold themselves accountable. So it falls on us, the children, to do that."

Business and government leaders will come together in Davos, Switzerland later this month for the 50th anniversary of the World Economic Forum. This year's theme is "stakeholders for a cohesive and sustainable world." Thunberg and her co-authors explain in the Guardian that "young climate activists and school strikers from around the world will be present to put pressure on these leaders."

"We demand that at this year's forum, participants from all companies, banks, institutions, and governments immediately halt all investments in fossil fuel exploration and extraction, immediately end all fossil fuel subsidies, and immediately and completely divest from fossil fuels," the op-ed declares. "We don't want these things done by 2050, 2030 or even 2021, we want this done now—as in right now."

The youth activists point out that despite the "climate and environmental emergency," banks have collectively poured at least $1.9 trillion into the fossil fuel industry since global governments adopted the Paris climate agreement in December 2015, according to an analysis from the Rainforest Action Network and other advocacy groups.

"The world of finance has a responsibility to the planet, the people, and all other species living on it. In fact, it ought to be in every company and stakeholder's interest to make sure the planet they live on will thrive," says the op-ed. "But history has not shown the corporate world's willingness to hold themselves accountable. So it falls on us, the children, to do that."

"Anything less than immediately ceasing these investments in the fossil fuel industry would be a betrayal of life itself," the op-ed concludes. "Today's business as usual is turning into a crime against humanity. We demand that leaders play their part in putting an end to this madness. Our future is at stake, let that be their investment."

The op-ed was welcomed as "incredible" and a "barnburner" by adult climate leaders.

"Brilliant article by youth strikers from around the world," tweeted the U.K. grassroots movement Labour for a Green New Deal. "We need to ditch fossil fuels immediately and build a new economy for people and planet. The ruling classes will never do it, so it's up to us."

Some organizers of Stop the Money Pipeline—which officially launched at Jane Fonda's final #FireDrillFriday event on Capitol Hill—noted that the op-ed's message aligned with theirs. As Common Dreams reported Thursday, the new campaign demands that banks, insurers, and asset managers cut ties with the fossil fuel companies that are wrecking the planet.

Moira Birss, finance campaign director at Amazon Watch, shared Stop the Money Pipeline's website and the op-ed from youth activists in a series of tweets Friday:

Author and activist Bill McKibben, who co-founded the environmental group 350.org, was among a small group of Stop the Money Pipeline organizers arrested Friday for occupying a D.C. branch of JPMorgan Chase, one of the campaign's top targets.

McKibben pointed to the op-ed in a Twitter thread about the Chase action:

"The world has two power centers, political and financial," McKibben said in a statement Friday. "And we have to go after both if we have any hope of slowing down the pace of global heating."

"Now truly, it is daunting to take on the sort of central pillars of global capital... These people are huge and strong and powerful," McKibben said on the most recent Fire Drill Friday teach-in, which was livestreamed on Facebook Thursday night.

"On the other hand," he added, "if we can get them to begin to bend, the effects will be rapid and global because all the money in the world is concentrated in a few places."