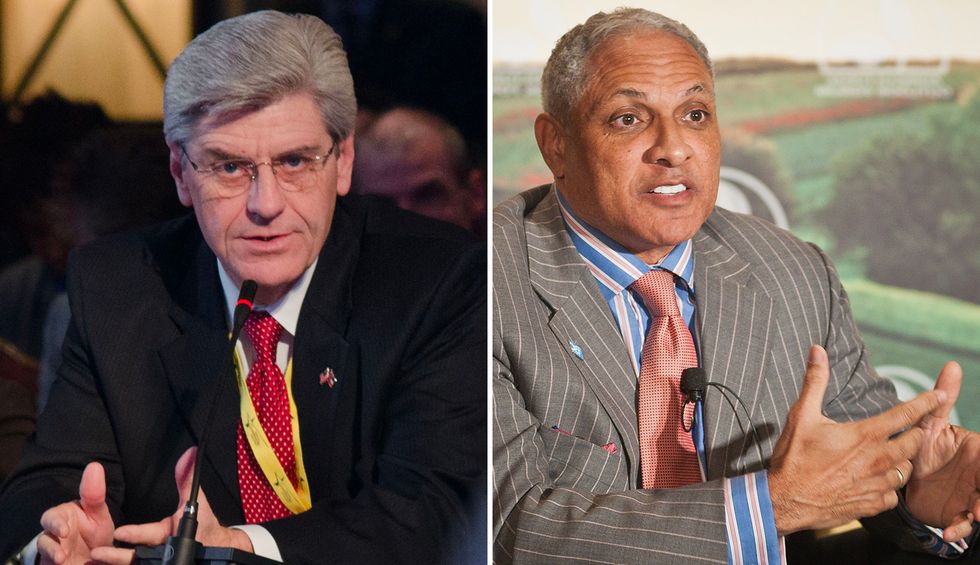 When Democrat Mike Espy lost Mississippi’s special U.S. Senate runoff election to Republican Sen. Cindy Hyde-Smith in 2018, he performed relatively well for a Democrat in a deep red state: Espy won 46% of the vote. Espy is running against Hyde-Smith again in 2020, and far-right Mississippi Gov. Phil Bryant is predicting that terrible things will happen if Espy wins. Journalist Joe Jurado analyzes Bryant’s hysteria in a January 9 article for The Root, noting that Espy would be Mississippi’s “first black Senator in over 139 years” if he wins.

Bryant voiced his support for reelecting Hyde-Smith in a January 2 tweet, posting, “I intend to work for @cindyhydesmith as if the fate of America depended on her single election. If Mike Espy and the liberal Democrats gain the Senate, we will take that first step into 1000 years of darkness.”

Hyde-Smith, Jurado points out, set off a controversy in 2018 when she praised a supporter (a cattle rancher) by asserting, “If he invited me to a public hanging, I’d be on the front row.” Jurado finds that to be a terrible word choice in light of Mississippi’s history of lynching and radical oppression.

I intend to work for @cindyhydesmith as if the fate of America depended on her single election. If Mike Espy and th… https://t.co/YQS2SKGxJB
— Phil Bryant (@Phil Bryant)1577975990.0

“Mississippi has a very long and very violent history of racism: 600 black people were lynched between 1877 to 1950, the most of any state,” Jurado recalls. “Up until 2017, the state still had predominately segregated schools. This makes it all the more unsurprising that the governor believes Mike Espy being elected to the Senate would open the doors of Guf and bring about the fourth impact. We’re talking about the same man who, after Hyde-Smith came under fire for her lynching comments, went on a podium and compared black women getting abortions to genocide. Hyperbolic racism just seems to be this dude’s go-to.”

Jurado writes that Bryant’s “1000 years of darkness” remark is an “interesting word choice when describing the consequences of Mississippi electing its first black senator in over 139 years” and “even more interesting when you realize he’s doing this in support of Sen. Cindy Hyde-Smith. Remember her? She was the lady that said she would be front row at a public lynching.”

Espy is fighting an uphill battle this year: he is competing against a GOP incumbent in one of the reddest states in the U.S. While Texas is light red at this point and Arizona has evolved into a swing state, Mississippi continues to be deeply Republican. But as Jurado notes, Espy has a track record.

“Espy previously ran in the runoff election in 2018 where Hyde-Smith was initially elected,” Jurado observes. “Espy was an elected congressman from 1987-1993 until President Clinton appointed him to U.S. secretary of agriculture. Hyde-Smith, on the other hand, is just another racist.”