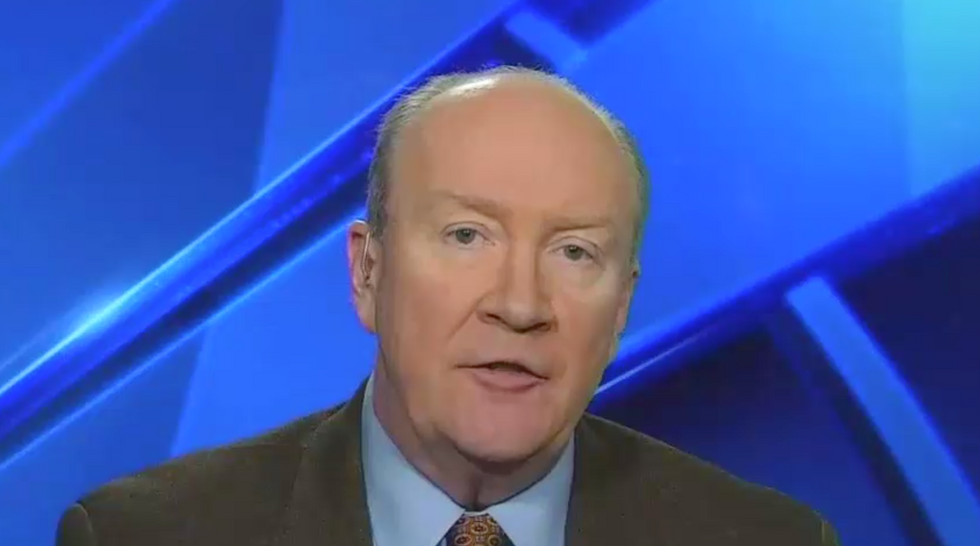 Fox News legal analyst Andrew McCarthy has billed himself as one of the more credible legal analysts defending President Donald Trump in recent years, though he often has to bend over backward and squint to see the facts in the best light for the White House. And in a segment on Fox News on Thursday flagged by Media Matters where he discussed the new developments in the impeachment case, McCarthy offered a jaw-dropping take on Trump's abuse of power.

"We used to have, and up until very recently, this has been the history of the United States, the expectation — which was the Framers' expectation — that from time to time, the chief executive would abuse his power, in the sense of either doing something that the Constitution didn't permit, or somehow overdoing the powers that the Constitution gives to the president," he said. "And the expectation was not that you were going to jump every time that happened to impeachment."

He continued: "There are other ways that the Congress, either by political pressure or by using the power of the purse, would be able to rein in presidential excess. The idea was that, you know, there is a lot of area between something that is wrong and something that is impeachable. And I think that's what we have lost in this equation."

In essence, he said it's shame that the Congress didn't just let Trump get away with abusing his power.

At the core of this argument, there is a tiny bit of truth. Presidents, at least any with significant ambitions, will probably inevitably push the bounds of what is legal or constitutional — boundaries that are often open to debate — and rushing to impeachment for any such action would be a mistake.

But that's not at all what happened in this case. In fact, Democrats in the House of Representatives clear gave Trump a pass on many abuses of power — his migrant family separation policy, his obstruction of justice in the Mueller report, his violations of the Emoluments Clause, to name just three — before they eventually decided to impeach him for the Ukraine scandal. This isn't a case of a Congress looking for any minor violation to justify impeachment, but of a president who kept pushing the boundaries to such extreme lengths that impeachment was absolutely necessary. As some of the constitutional experts who testified before the House Judiciary Committee argued: If Trump's conduct toward Ukraine isn't impeachable, nothing is.

Further, Trump has shown no signs of remorse or backing down from his efforts to pressure Ukraine into investigating his political opponents, which McCarthy admitted that Trump did. This was an illegitimate, abusive and likely illegal attempt to interfere in the next election, and Democrats have no reason to believe it won't happen again. McCarthy can't explain why, in those circumstances, Trump's abuse of power isn't unequivocally grounds for impeachment.