Chuck Todd now realizes he's being used for propaganda. What happens next? 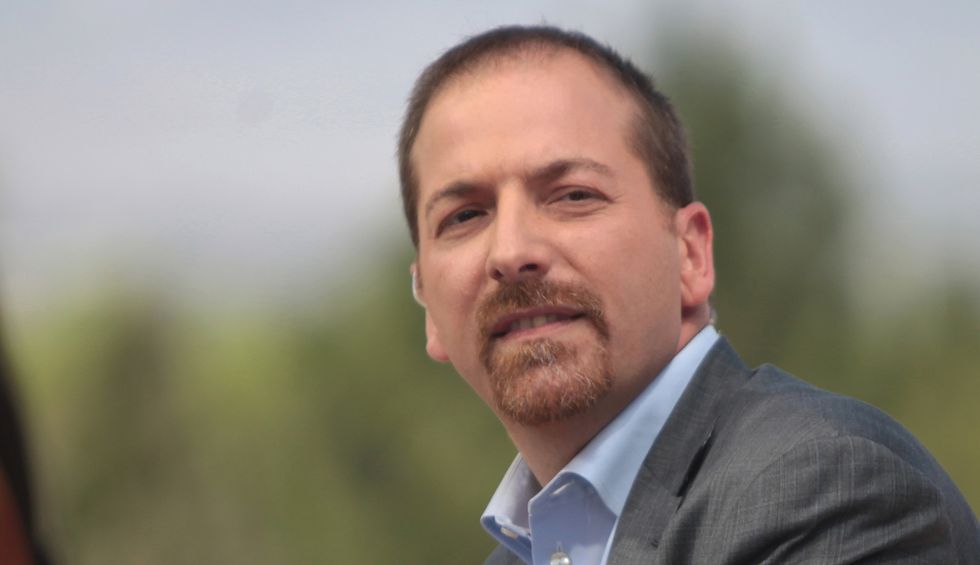 At the website PressThink, Jay Rosen had a post-Christmas examination of Meet The Press host Chuck Todd's startling new realization that, golly gee, it turns out that Republicans have been intentionally using his show and others to spread false information. Yes, Todd just realized that now. Yes, he is one of the top political "minds" in Washington, which ought to clarify just how boned we all are, as the nation's political press continues to somehow degrade into something even worse and more vapid than the chummy gullibles that brought us the Iraq War.

I don't have much to add to Rosen's diagnosis, so go read that, but here's a key point.

So what will they do now? My answer: they have no earthly idea. This is what I mean by an epistemological crisis. Chuck Todd has essentially said that on the right there is an incentive structure that compels Republican office holders to use their time on Meet the Press for the spread of disinformation. So do you keep inviting them on air to do just that? If so, then you break faith with the audience and create a massive problem in real time fact-checking. If not, then you just broke the show in half.

Whether we truly believe that Todd or any of the other hosts on any of the other shows have been previously mystified as to why Kellyanne Conway, Ted Cruz, the phalanx of House Republican Trump defenders, Trump himself, or the rest of the Republican Party moved into overt disinformation and propagandizing, with the networks' willing help, is irrelevant. We have our suspicions, but it is irrelevant. The pertinent question is what happens to Meet the Press now that its host has confirmed, in his own mind and to the public, that Republican guests have been intentionally lying to the American public, relying on network and journalistic conventions to broadcast those lies with little or no pushback.

As Todd himself realizes (just now, allegedly), his show's current format rewards lying over honest behavior. So what now?

There are a few possibilities, and all of them would require an integrity among the Sunday shows that I don't think any of the Sunday shows have, or want. First, pervasive liars such as Conway and the vaporous White House press secretary do not need to be on the airwaves at all: There is no information they can convey to guests that cannot be accessed elsewhere and more accurately, and both have a proven record of repeatedly using media as disinformation outlets.

Second: If House or Senate politicians begin spouting Russian propaganda claims about how Ukraine, not Russia, interfered in U.S. elections, or some other claim that goes directly against reality as we all know it, that should be a showstopper: no Moving on to the next question, no We'll have to leave it there, but a slam on the brakes. The host should note the true version, note that the guest's version is false, and grill the guest as to why they have given that false answer. Is it because they believe it? Is it hyperbole, something they will disown when pressed?

Is it because they are crooked—are lying to the public intentionally, in order to mislead the public? That is a possibility. If a host is convinced that this is the case, the host has a responsibility to say so. If the host has insufficient facts at their disposal at the moment, there is tremendous public value in following up with the true facts, on air, in the next segment, or even the next week.

Third: Do these interviews truly need to be conducted "live" in the case of guests with a history of disinformation? A mere 20-minute delay would allow network graphics departments to note, in the forms of chyrons and other text, when a guest has claimed something that is brazenly untrue.

Every approach, however, is a means of accomplishing the same thing: creating a mechanism by which those that spout disinformation to the public can incur damage, and not just rewards. This is not the same as attempting to shame politicians into honest behavior; there is no such thing as political shame. Stop expecting it; stop presuming it. There is only advantage or disadvantage. Liars will stop lying in public when the penalties for public lying are consequential enough to outweigh the advantages of broadcasting the lie.

Being publicly and rigorously branded as a source of false information would do that—not because it would impart shame, but because it would weaken the ability of the propagandist to be effective with the large majority of the semi-informed, nonrabidly-partisan public that is the propagandist's main target. Declining to provide a venue for past liars would do more damage still.

Few in the top ranks of media journalism, either at the networks or in the pages of The New York Times, have any stomach for inflicting damage on those that lie to the public. It is a transactional relationship in which propagandists get a nationwide audience, and those that report what they say get column space or air time filled, and with the required spice of conflict. Meet the Press exists to broadcast the thoughts of the powerful, regardless of whether those thoughts are true or false and whether their notions are ethical or are horrific. Industry lobbyists are queried for talking points they formulate only upon receiving the necessary industry check; yesterday's advocate for state-sponsored torture can be tomorrow's valued expert on an assortment of other topics. The Sunday shows were issuing societal pardons for atrocities long before Trump set himself to the formal version.

So none of us, I think, has any faith that the networks will work in the interests of our nation here, even as the very foundation of democracy itself is unthreaded. Democracy cannot exist if a nation's leaders are free to simply invent whichever version of reality best suits their own priorities and ambitions. We are seeing it happen: Republicans became convinced that the economy was bad in 2016 and was tremendous in 2017 because it was repeated endlessly, and with false evidence. The chocolate rations were down; now they are up. Russia committed an attack on our very government in 2016—or perhaps our real enemy, the opposition party, manufactured the entire scheme from a Ukrainian basement.

This is an unraveling. It is historic, in the worst way: It is a national story with implications beyond those of any front page or Exclusive Special Report of the last four decades. It has the Chuck Todds of Washington wondering if, at long last, choreographed journalistic playdates with chummy falsehood-spewers have gone too far.

But media paychecks depend on finding a way to save the nation that will not damage ratings, and it is as simple as that. Will calling out the new American propagandist movement be as entertaining, as titillating, as reputation-boosting in Washington as hosting and amplifying the propagandists is now? If the networks and papers cannot find a way to make it so, we can be absolutely certain they will not try.