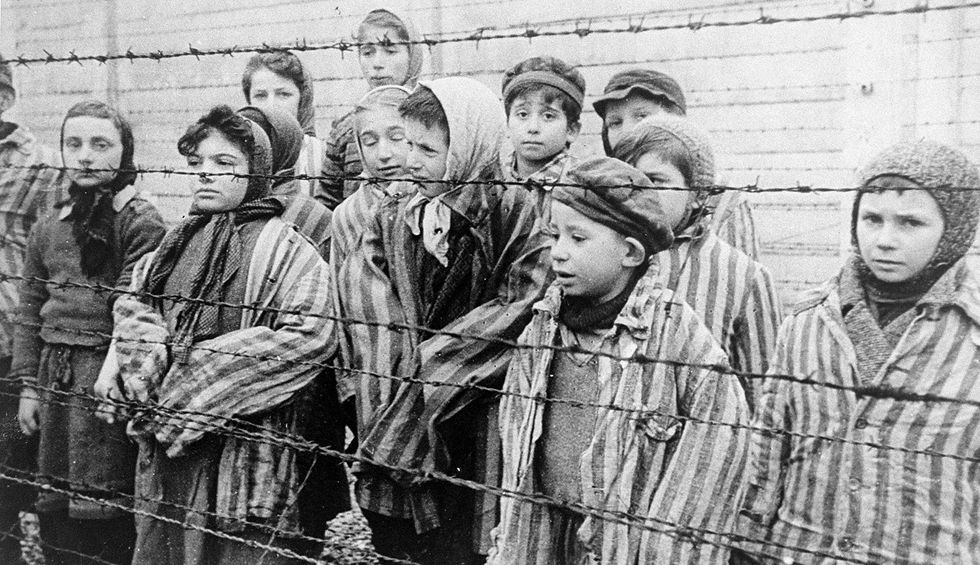 The new BBC documentary about the question of bombing Auschwitz deserves an award—for creative fiction. Through omissions, distortions, and “re-enactments” of conversations with imaginary dialogue inserted for effect, the BBC has made a shambles of the historical record concerning this important issue.

The film, “Bombing Auschwitz,” was broadcast in the United States by PBS on January 21 and is being screened at various venues. It purports to tell the story of what it calls the “debate” in 1944 over “one of the great moral dilemmas of the 20th century” --that is, whether to bomb the gas chambers at Auschwitz, despite the risk that some inmates might be harmed.

In fact, there was no such “debate.” There were a few individuals who privately expressed qualms. But they did so long after the Roosevelt administration had repeatedly rejected the bombing requests, on completely different grounds.

U.S. officials did not cite the danger of harming inmates when they turned down the bombing requests. That was not a consideration. The first such requests—and many of the later ones—asked for the bombing of the railways and bridges leading to the camp, and striking such targets obviously did not endanger civilians.

Rescue advocates sought those bombings because hundreds of thousands of Hungarian Jews were being deported in cattle cars across those tracks and bridges, destined for Auschwitz. Damaging the transport routes would have interrupted the mass murder process.

Remarkably, the requests and rejections concerning bombing the railways and bridges are not discussed in the film. In fact, some of the requests that were made to bomb the railways are misleadingly presented in the film as requests to “bomb Auschwitz.” The BBC has, in effect, whited-out the actual historical record, and replaced it with a distorted narrative that suits its creators’ agenda.

THE “STUDY” THAT NEVER WAS

The first requests for bombing were made in telegrams to the Roosevelt administration in June 1944 by leaders of Agudath Israel (an Orthodox group based in New York) and the Jewish Agency for Palestine, and by Roswell McClelland, a Switzerland-based official of the U.S. government’s own War Refugee Board. They named the specific rail lines and bridges between Hungary and Poland that should be targeted to disrupt the deportations.

An official of Agudath Israel, Meier Schenkolewski, also met in person, on June 19, with two senior members of President Franklin D. Roosevelt’s cabinet to plead for the bombing of the railways and bridges. Secretary of State Cordell Hull passed the buck, telling the Agudath Israel emissary to go talk to the War Department. Secretary of War Henry Stimson falsely told Schenkolewski that bombing those targets was impossible because they were “within the competence of the Russian Military Command.” In fact, American planes were already flying in the vicinity of Auschwitz, in preparation for attacks on other targets. Neither Hull nor Stimson is mentioned in the film.

Assistant Secretary of War John McCloy, acting on behalf of the administration, replied to the written requests of June 1944 and rejected them out of hand. He used nearly identical language in the rejection letters that he sent later that summer, in response to requests by other Jewish groups to bomb both the railways and the gas chambers within Auschwitz.

In his letters, McCloy did not express any concern about possibly harming the inmates of Auschwitz. He wrote that the War Department had undertaken “a study” which concluded that any such bombings were “impracticable” because they would require “the diversion of considerable  air support essential to the success of our forces now engaged in decisive operations” elsewhere in Europe.

McCloy’s explanation was false. No such “study” was ever conducted. No “diversion” of airplanes would have been needed—because U.S. bombers were already striking German oil factories in the Auschwitz industrial zone, just a few miles from the gas chambers. The real reason for the rejections was the Roosevelt administration’s policy of refraining from using even the most minimal resources for humanitarian objectives, such as interrupting genocide.

McCloy’s letter, which is central to this historical episode, is not mentioned in the film. Instead, the “diversion” argument is presented as a legitimate objection—as if bombing Auschwitz really would have undermined the war effort. The entire fictional “debate” is presented to the viewer as a clash between U.S. officials who were waging the war, and semi-hysterical Jewish leaders who wanted to divert from the war effort for the sake of their narrow Jewish interests.

Jewish leaders were aware at the time that the Allies were bombing the oil factories at Auschwitz. The co-chairman of the World Jewish Congress, Nahum Goldmann, who repeatedly met with U.S. officials to press for bombing the railways and the gas chambers, specifically cited the fact that they were already “regularly bombing the I.G. Farben factories, a few miles distant from Auschwitz.”

The “oil war,” as it was called, was no secret. On August 21, 1944, for example, a front page article in the New York Times described how “500 United States heavy bombers from Italy today…bombed the I.G. Farbenindustrie synthetic  oil and rubber plant at Oswiecim in Polish Silesia.”

The fact that Oswiecim/Auschwitz also was a death camp for Jews was no secret, either. The Times itself mentioned the mass murder of Hungarian Jews in Auschwitz in news articles on June 25, July 3, and July 6. During this same period, the Jewish Telegraphic Agency —the leading international Jewish news agency—repeatedly described the mass killings that were taking place in what it called “the notorious ‘extermination camp’ at Oswiecim.”

In other words, Goldmann and his colleagues knew at the time that the “diversion” argument was false. Yet Goldmann does not appear anywhere in the BBC’s film—not among the characters quoted, not in the narration, and not in the re-enactments.

The producers preferred one of Goldmann’s subordinates, A. Leon Kubowitzki, because he proposed that Auschwitz be attacked by Allied ground troops rather than from the air. Kubowitzki was the only official of any Jewish organization who told U.S. officials he opposed bombing Auschwitz. By contrast, 30 different officials of Jewish organizations called for bombing. Yet the BBC film highlights Kubowitzki’s view, omits Goldmann, and disingenuously creates the impression that there were a few Jewish leaders in favor, and a few against.

Kubowitzki was useful to the BBC producers—but only up to a point. The fact that he also circulated proposals for bombing the railway lines and bridges leading to Auschwitz was simply omitted. That historical information would have conflicted with the film’s narrative—and when the historical record conflicts with the preconceived narrative in “Bombing Auschwitz,” apparently history must give way.

Just before the film was completed, a BBC producer contacted me for an interview. When the project’s extreme bias became apparent, I declined to participate. I had good reason to expect that anything I said on camera which undermined the predetermined narrative would end up on the cutting room floor. Which, as it turns out, is exactly what happened with George McGovern.

In a series of telephone conversations and email exchanges with the BBC producer, Sue Jones, I explained that there had been no “debate” over bombing Auschwitz and that the main Jewish requests that U.S. officials rejected concerned bombing the railways and bridges. I pointed out to her that young George McGovern, the future U.S. senator and Democratic presidential nominee, was one of the pilots who flew over the Auschwitz region in 1944. In a lengthy videotaped interview some years ago (with the filmmakers Haim Hecht and Stuart Erdheim), McGovern said that bombing the railways and bridges would have been feasible. He noted that Allied pilots frequently bombed railways and bridges as part of the war effort, even though they were sometimes difficult to hit.

McGovern said the “diversion” argument was just “a rationalization,” since he and other U.S. pilots were already flying over that area, and didn’t need to be diverted.  “Franklin Roosevelt was a great man and he was my political hero,” McGovern added. “But I think he made two great mistakes in World War Two.” One was the internment of more than 120,000 innocent Japanese-Americans; the other was the decision “not to go after Auschwitz…God forgive us for that tragic miscalculation.”

Ms. Jones told me she had never heard of McGovern’s role—despite the fact that the interview with him had been the subject of dozens of published articles in major newspapers, and even was screened on Capitol Hill for a Congressional task force.

I sent her the link to the video. Jones feigned interest. “I’m very interested in including McGovern,” she wrote me on April 1. And: “The McGovern interview is a good watch.” Not good enough, apparently. McGovern is not mentioned even once in the film. One of the most prominent figures in recent American political history was directly involved in the events in question—and yet the BBC could not find even a few seconds to mention him. Because, of course, what he had to say would have contradicted the film’s agenda.

Dr. Rafael Medoff is founding director of The David S. Wyman Institute for Holocaust Studies, and the author of The Jews Should Keep Quiet: Franklin D. Roosevelt, Rabbi Stephen S. Wise, and the Holocaust, which was recently published by the Jewish Publication Society / University of Nebraska Press.