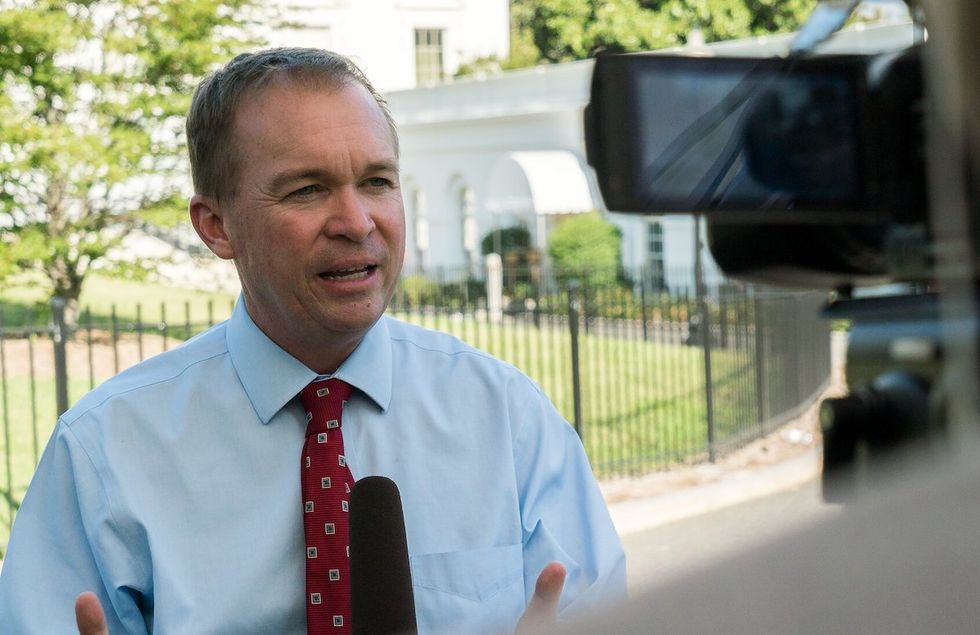 President Donald Trump's administration violated the law when it withheld aid to Ukraine as part of his actions at the center of the impeachment case, according to a new report from the independent Government Accountability Office, which serves Congress.

The finding was announced on the same day that the Senate impeachment trial officially began, and it affirmed what many have thought: The Office of Management Budget, as a part of Trump's Ukraine scheme, broke the law to implement the president's orders.

Here are seven key details you should know from the report:

These are the topline findings:

Faithful execution of the law does not permit the President to substitute his own policy priorities for those that Congress has enacted into law. OMB withheld funds for a policy reason, which is not permitted under the Impoundment Control Act (ICA). The withholding was not a programmatic delay. Therefore, we conclude that OMB violated the ICA.

This conclusion dramatically undermines Republican's defenses of Trump in the impeachment. Republicans have repeatedly said there was nothing truly scandalous at the heart of the Ukraine scandal and that the Democrats made it up out of whole cloth. But here, an independent government agency determined that the president's actions violated the law. There's a whole lot of other evidence of wrongdoing and malign intentions on the president's part, and a violation of the law isn't necessary for impeachment, but it emphasizes the seriousness of the president's offense.

2. The Office of Management and Budget first began officially stalling the aid on July 25 — the same day as Trump's phone call with Ukrainian President Volodymyr Zelensky.

"On July 25, 2019, OMB issued the first of nine apportionment schedules with footnotes withholding USAI funds from obligation," the report said.

3. The report lays out why Trump doesn't get to stall money at his whim, according to the Constitution.

The Constitution specifically vests Congress with the power of the purse, providing that “No Money shall be drawn from the Treasury, but in Consequence of Appropriations made by Law.” ... The Constitution also vests all legislative powers in Congress and sets forth the procedures of bicameralism and presentment, through which the President may accept or veto a bill passed by both Houses of Congress, and Congress may subsequently override a presidential veto. ... The President is not vested with the power to ignore or amend any such duly enacted law. ... [The] Constitution does not authorize the President “to enact, to amend, or to repeal statutes" ... Instead, he must “faithfully execute” the law as Congress enacts it.

The Constitution grants the President no unilateral authority to withhold funds from obligation.

4. The Impoundment Control Act specifically prohibits presidents from delaying the allocation of funds except for specific reasons.

The report noted that Congress was specifically concerned about the kind of actions Trump undertook when it enacted this law, as it sought to ensure that "the practice of reserving funds does not become a vehicle for furthering Administration policies and priorities at the expense of those decided by Congress.”

5. OMB's excuses for not complying with the law do not add up.

The Trump administration tried to argue that the pause in the funds was lawful because it was a "programmatic delay." But the GAO didn't buy it.

"OMB’s assertions have no basis in law," the report said. "[Programmatic] delays occur when an agency is taking necessary steps to implement a program, but because of factors external to the program, funds temporarily go unobligated. ... This presumes, of course, that the agency is making reasonable efforts to obligate. ... Here, there was no external factor causing an unavoidable delay. Rather, OMB on its own volition explicitly barred DOD from obligating amounts."

6. In fact, OMB implicated the president directly in the hold while offering an illegitimate excuse.

"OMB described the withholding as necessary to ensure that the funds were not spent "in a manner that could conflict with the President’s foreign policy,'" the report said. But the report noted, as explained in (4), that this is exactly what the Impoundment Control Act is meant to avoid.

"The ICA does not permit deferrals for policy reasons," the report continued. "OMB’s justification for the withholding falls squarely within the scope of an impermissible policy deferral. Thus, the deferral of USAI funds was improper under the ICA."

7. As it did in the impeachment investigation, the Trump administration appears to have obstructed or not complied with the GAO's probe.

While OMB complied with the GAO's investigation's requests for information, the Department of Defense did not.

"We have contacted DOD regarding its response several times," the report said. "Thus far, DOD officials have not provided a response or a timeline for when we will receive one."

Similarly, the State Department was in control of a separate set of funds to Ukraine that was also delayed in the same period. However, the reported noted: "State provided us with limited information." So while the GAO didn't conclude that the hold on the State Department funds was illegal, it said it still has questions about the legality of that delay as well.

"OMB and State have failed, as of yet, to provide the information we need to fulfill our duties under the ICA regarding potential impoundments of FMF funds," the report said. "We will continue to pursue this matter and will provide our decision to the Congress after we have received the necessary information."