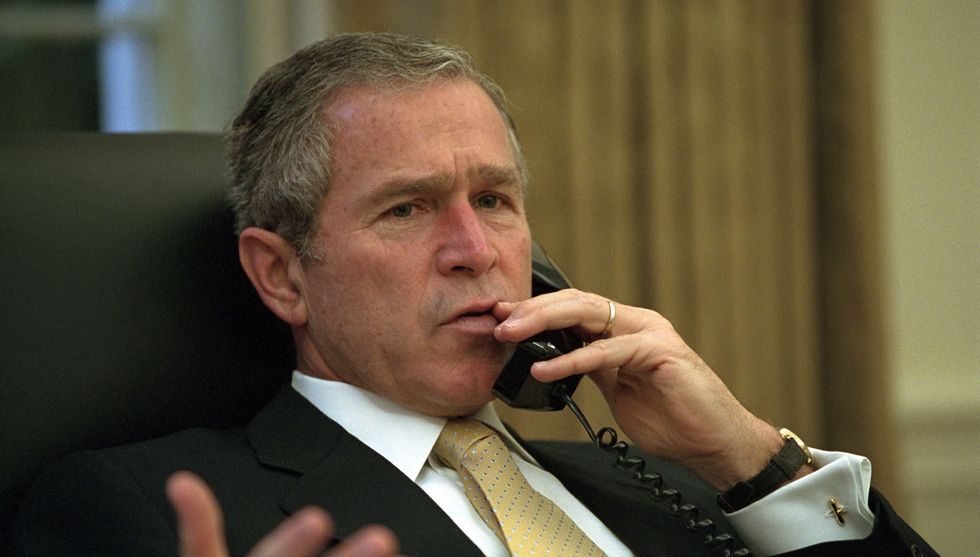 While the horrors of the Donald Trump presidency loom large in our collective consciousness, it's easy to forget many of the worst aspects of the era of President George W. Bush.

And as Trump's provocations and escalating attacks on Iran bring us closer to the brink of war, some of the most frightening tendencies in American political discourse from the era of Bush II are re-emerging, giving a disturbing sense of repeating history.

Of course, it's not guaranteed that we'll go to war with Iran as we did with Iraq. Both countries have strong incentives to avoid war, if possible. But after Trump ordered the killing of Qassim Suleimani, a top military leader of Iran, many experts believe the regime has essentially no choice but to retaliate in some form. The president has promised a disproportionate response, which could include war crimes. It's not hard to see how the situation could spiral out of control.

Whether the worst happens or not, it's deeply troubling to see the following old habits from the Bush-era run-up to the Iraq War replay themselves:

It's particularly ironic that, as Trump's defenders rush to argue in support of the Suleimani killing, they are citing the supposed intelligence reports that indicated he was a threat to the United States. Some Democrats who have been briefed on the matter continue to express skepticism about the information and what it is said to justify.

Earhardt and Grisham were quickly called out for their hypocrisy, given that Trump has for years repeatedly attacked and cast doubt on the intelligence community. But it's even more hypocritical than that because Trump has attacked the intelligence community for exactly the mistakes and lies that led to the Iraq War, saying in 2016: "These are the same people that said Saddam Hussein had weapons of mass destruction."

2. Smearing those who disagree as terrorist sympathizers

While the Bush presidency is now frequently remembered for the disastrous and false build-up for the Iraq War, it's often glossed over that not only were the bogus reports about weapons of mass destruction given too much credence but dissenters from the administration's view were regarded and spoken of as outright traitors.

Not wanting to go to war in Iraq — and not endorsing the rest of the so-called War on Terror — was often enough to be labeled a terrorist sympathizer or, at least by implication, simply a terrorist.

Now that Republicans have decided they're all in on Trump's killing of Suleimani, and since they have little substantive defense of the strategy behind such aggressive action, they're reverting to the same playbook.

“The only ones mourning the loss of Soleimani are our Democrat leadership and Democrat Presidential candidates,” Nikki Haley said on Fox News after the killing, a completely fabricated smear. Despite the fact that Democrats have repeatedly said Suleimani was a terrorist or a bad actor while questioning Trump's actions, Republicans have been desperate to slam the party as sympathetic to him.

3. Extreme religious reverence for the president

Another oft-forgotten element of the Bush era was the disturbing role the president seemed to take on at the time as a pseudo-religious figure himself. Evangelical Christians saw him as a member of their community, and he often cited his religious belief in his decisions, giving some the perception that the Iraq War was a religious crusade.

Trump, too, has a special relationship to the white evangelical community, and many of its members have spoken of him in revered terms or compared him to Jesus. And in his first rally after the killing of Suleimani, Trump stood before evangelicals and claimed divine backing for his decision, saying that God is "on our side," the New York Times reported.

The Bush administration repeatedly tried to link Saddam Hussein's regime in Iraq to the attacks of 9/11, which the evidence never established. Following the killing of Suleimani, Vice President Mike Pence tried the same move again — claiming that the killed military leader assisted the hijackers without any evidence.

Secretary of State Mike Pompeo suggested, without evidence, that the Iranian general, who was responsible for Iran’s proxy wars throughout the Middle East and had helped spearhead the country’s strategy to keep war-torn Iraq as a vassal state, was taken out because he was planning “imminent attacks” against Americans. Trump, echoing this line, said that he ordered the assassination to “stop a war,” adding, “We did not take action to start a war.”

These lines were repeated uncritically by a number of news outlets. Others added their own “analysis” of the president’s rash decision, which was perceived by Iran to be a naked act of war. “The calculus was straightforward,” The New York Times’s David Sanger wrote over the weekend. “Washington had to re-establish deterrence, and show the Iranian leadership that missiles fired at ships in the Persian Gulf and at oil facilities in Saudi Arabia, along with attacks inside Iraq that cost the life of an American contractor, would not go without a response.”

What the Iran coverage shows is that the mainstream media’s biggest liability remains its credulous approach to an administration with zero credibility. Given Trump’s track record—and his thousands of lies as president—there is simply no reason to take anything that he says at face value. The Bush administration at least dressed up its lies with theater, with Colin Powell at the United Nations; the Trump administration has offered nothing to support its claim that “imminent” attacks against Americans were being planned, or that killing Soleimani was the only way to prevent these attacks, or that hitting Iran’s top general with a missile was meant to forestall a war with Iran.