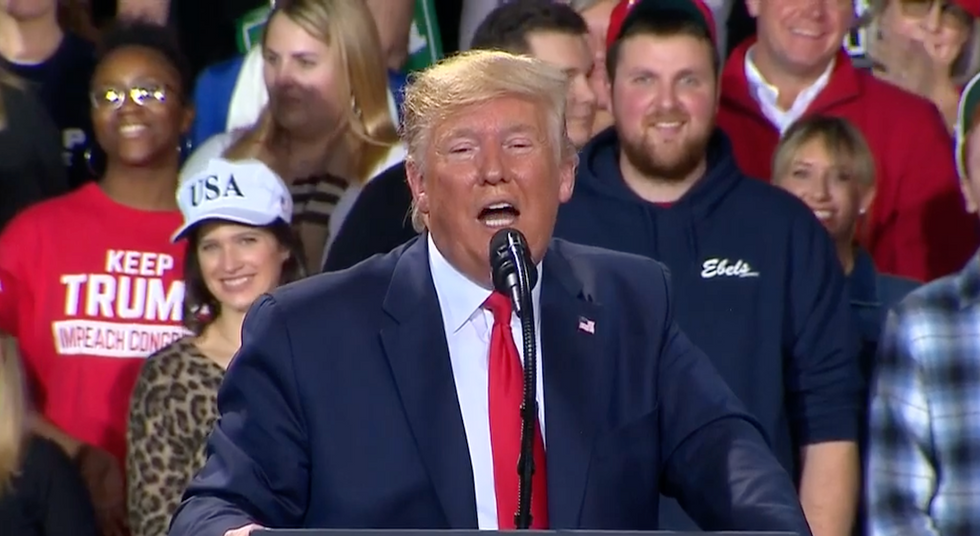 While House Democrats were voting overwhelmingly to impeach President Donald Trump on Wednesday, the commander in chief was at a rally in Michigan feeding his and some of his supporters' abysmal impulses.

Trump's outrageous and often grotesque personal behavior is not the reason he was impeached, of course. Though there would have been precedent if it was: President Andrew Johnson, one of the only two other U.S. presidents to be impeached, faced a charge from the House of Representatives for three speeches he gave in which he allegedly attempted "to bring into disgrace, ridicule, hatred, contempt and reproach, the Congress of the United States."

But though his objectionable manners weren't a part of the articles of impeachment, they stood in contrast to the nature of the impeachment process that proceeded against him. After the first article passed, some Democrats in the chamber began to cheer — but House Speaker Nancy Pelosi silenced them with a stern look. As she made clear at a press conference following the votes, impeachment was not a cause for celebration or boasting.

For Trump, though, there's never a good reason to avoid personal boasting or attacking his enemies. And if anything, he might have amped up his attacks higher than usual in the face of impeachment.

Discussing the late Rep. John Dingell (D-MI), whose widow Trump recently criticized for supporting impeachment, the president suggested at his rally that the congressman was now in hell. Trump said he might be "looking up" at us now, rather than looking down. That prompted this heartbreaking reply:

Referring to former FBI Director James Comey, he said, "Did I do a great job when I fired his ass?" This claim is particularly ironic, since firing Comey led to the investigation of Robert Mueller. Mueller's probe, which indicates the president likely committed criminal obstruction of justice, is obliquely referenced in the articles of impeachment, as they note that Trump has a history of trying to block investigations.

Even more bizarrely, he said at one point, "I have a group of African-American guys, and gals by the way, that follow me around, and they think I pay them, and I don't," according to CNN's Daniel Dale.

And as usual, there were chants of "lock her up" —  this time, directed toward Pelosi.

But while Trump's typically shameful behavior was on display, it was House Republicans who truly set new record lows for themselves. After all, we all know who Trump is — he's been the same person in public for years now, even if he's coarsened and worsened in recent years.

Republicans showed themselves, more than ever, to be the party of Trump on floor of the chamber. While debating the impeachment articles, the offered little substantive defense of Trump's conduct. Much of what they offered was lies and distortions of the factual record and attacks on the process House Democrats used to conduct the impeachment.

At the heart of their argument, though, was hatred. Republicans claimed that Democrats were impeaching Trump because they hated them and because they hated his 63 million voters. They wouldn't grapple with Trump's conduct — abusing his office to induce a foreign ally at war into investigating his political rival and obstructing Congress from investigating the matter. They, of course, weren't interested in the millions more Americans who voted against Trump, or the facts that the Democrats uncovered. And they weren't concerned with actually addressing the questions of protecting democracy and constitutional government. Instead, they were clearly focused on showing that they support Trump 100 percent.

This support took the form of not only defending him procedurally and voting against impeachment but of adopting his style and attitude. Their goal, it seemed, wasn't to persuade anyone of their view but to foment the anger of their base against the Democratic Party. Democrats, it should be noted, didn't do the same. They didn't say Republicans hated the nearly 66 million voters who cast a ballot for Hillary Clinton, or say the GOP hates what Democrats stand for. Instead, they urged their GOP colleagues to choose country over party, assess the president's conduct objectively, and do the right thing.

They were never going to do the right thing, though. Republican lawmakers are so bought in on Trump that even their major losses in 2018 couldn't shake their fealty. And because they've flatly refused to hold him accountable for anything — they're not even considering a vote to censure Trump for his conduct in the Ukraine scandal as an alternative to impeachment — they're enabling and empowering him.

After he is, as everyone expects, acquitted by the Senate, he may feel emboldened to try even more egregious attempts to steal the 2020 election and subvert the rule of law. And why not? His Republican allies have proven they won't stop him. The only thing that can stop him is a vote of the American people. From his amoral perspective, there's no reason not to cheat to win that vote.

If he does, whether he gets away with it or not, the entire Republican Party will bear that shame.