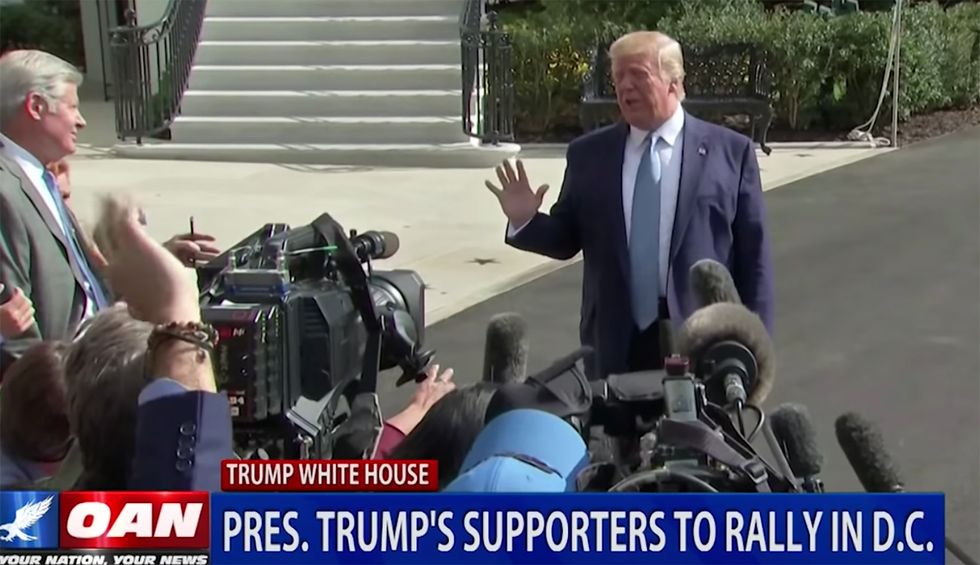 For those still blissfully unaware, One America News is a conspiracy-laced, heavily Dear Leader-premised pro-Trump "news" channel that came out of nowhere in recent years to land a spot as one of Donald J. Trump's most-favored allies. It is also now directly involved in Rudy Giuliani and Donald Trump's Ukrainian plot.

As House impeachment hearings unfolded, it was OAN that accompanied Rudy Giuliani on a trip to Kyiv, Ukraine, for the purposes of taping "interviews" with the same disgraced Ukrainian officials who had assisted Giuliani in ousting the anti-corruption U.S. ambassador to Ukraine and in peddling increasingly weird and categorically false smears against potential Trump political rival Joe Biden. Now The Daily Beast reports that the OAN efforts have been going even farther than even that.

Last week, German law enforcement officials arrested former Ukrainian parliamentarian Oleksandr Onyshchenko on a warrant from Ukrainian prosecutors. Onyshchenko, a multimillionaire, was wanted in Ukraine for embezzlement, stealing multimillions from Ukraine's state-owned natural gas company. It is part of the current Ukrainian government's efforts to clean up the rampant national corruption of past years, the same (frequently pro-Russian and/or Russian-tied) corruption that Trump campaign manager Paul Manafort involved himself in, and is currently in prison for, and which Giuliani is continuing to stump for in his collaborations with those same corrupt ex-officials.

But German officials might have at least temporarily missed Onyshchenko had they waited any longer, because at the time of his arrest, OAN was attempting to secure him a visa to travel to the United States. And the OAN network president confirmed to Daily Beast that the company is currently attempting to get American visas for other former Ukrainian officials—all apparently part of the Giuliani-helmed "investigation" that claims that disgraced Ukrainian embezzlers and crooked officials are the good guys battling the "corruption" of their declared enemies and that the current anti-corruption Ukrainian government and its American allies are actually the crooked ones.

That's a common-to-the-point-of-parody claim by arrested criminals and fleeing crooked government officials the world over, mind you, but both Rudy Giuliani and OAN have decided, for the purposes of benefiting Dear Leader, to attach themselves to this one. In Rudy's case, we know he has both solicited and received cash for his strange alliances in the country, though the details remain murky. OAN, however, appears to be spending its cash solely for the purposes of furthering an anti-Biden, anti-Ukraine, anti-U.S.-government propaganda video.

There doesn't seem to be much shame at OAN at being caught trying to help a wanted Ukrainian fugitive pop over to the United States to spread propaganda notions of his own innocence and something-something Joe Biden before law enforcement caught up with him. OAN also isn't revealing the identities of the other Ukrainian ex-officials it is still trying to obtain visas for. Fox News may be the most prominent propaganda outlet for Trump and Trump's preferred conspiracies, but it looks like OAN is trying to position itself as the preferred network of the Ukrainian mob.