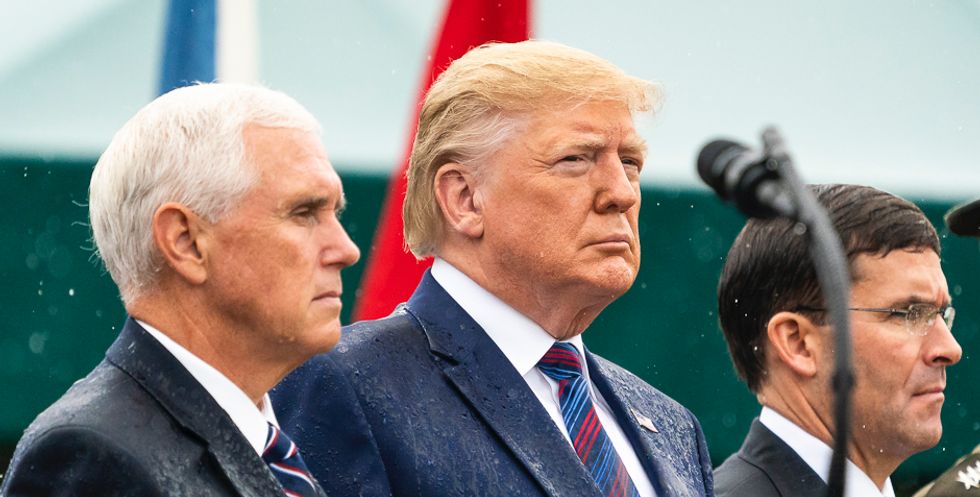 President Donald J. Trump, joined by Vice President Mike Pence, participates in an Armed Forced Welcome Ceremony in honor of the 20th Chairman of the Joint Chiefs of Staff Monday, Sept. 30, 2019, at Summerall Field, Joint Base Myer-Henderson Hall, VA (Official White House Photo by D. Myles Cullen)
Lucian K. Truscott IV
and
Salon
December 07, 2019 Drugs
When I was growing up at Fort Leavenworth, Kansas, back in the early 1960s, my mother drove down to Kansas City one morning to go shopping and have lunch with an old friend of her mother’s. Ladies going out shopping and having lunch in the upscale Country Club Plaza in Kansas City was almost a formal occasion. I remember she put on a summery suit and heels and stockings, and I’m pretty sure she wore a pair of white cotton gloves.

When she returned a few hours later, she wasn’t carrying any bags from the shops, and she was seething. The woman she’d eaten lunch with was married to a man who owned a chain of downtown hotels in major cities around the country. They lived in a big Tudor house in Mission Hills, the Beverly Hills of the Midwest. She drove a Cadillac. She was rich.

Why was my mother so angry? Well, it was what her mother’s friend talked about throughout their lunch. That week, she had gone to the bankruptcy auction of a chain of Midwestern drug stores and had bought a thousand pairs of stockings for a nickel apiece. She couldn’t stop talking about it, my mother said. She’d bought 50 makeup compacts, a hundred bottles of her favorite nail polish and a hundred color-matching Revlon lipsticks. She’d gotten the whole load — the stockings and the makeup and the nail polish — for less than $100.

“She’s rich!” Mom practically screamed. “She could afford to buy a whole drugstore full of stuff at full price, and all she could talk about what how much money she’d saved! I couldn’t take it. I finished my lunch and made an excuse that I had a headache and left. I’m never going to see her again.”

Donald Trump is the woman from Kansas City writ large. He’s a cheap, penny-pinching rich bastard who’s trying to steal another election so he can keep enriching himself in office. He’s gotten a taste of living the high life on the taxpayer’s dime, and he loves it. Everything he’s done since January of 2017 has had one goal in mind: remaining in the White House as long as he possibly can. That’s why, on the day after Robert Mueller testified before Congress about how he hadn’t been able to nail Trump for colluding with the Russians to steal the 2016 election, Trump didn’t wait even 24 hours before he picked up the phone and called Volodymyr Zelensky, the president of Ukraine, and tried to strong-arm yet another foreign leader into helping him steal the 2020 election.

The ways that Trump has grifted his presidency are too numerous to deal with here, but let’s just take his golf outings as an example. Last weekend, Trump made his 227th and 228th visit to one of his golf resorts, according to Trumpgolfcount.com. According to a recent article in Forbes, Trump has spent somewhere between $105 million and $108 million in taxpayer dollars playing golf since taking office. If he is re-elected and continues playing golf at the same rate, the bill to taxpayers at the end of eight years in office could top $340 million.

You could ascribe at least some of those costs to simply getting the president where he wants to go during his time off. But let’s take a single part of that cost that Trump himself could cover for the government if he wasn’t so cheap: The cost of golf carts used by the Secret Service to follow Trump around while he plays golf. According to Yahoo Finance, we taxpayers have spent $550,000 for the Secret Service to rent golf carts from Trump at his own golf courses since he took office.

Trump owns the golf courses in Florida and Virginia and Pennsylvania where he usually plays. He even owns the course in Doonbeg, Ireland, where he played golf in June and the Trump International Golf Links in Turnberry, Scotland, which was recently in the news because crews ferrying Air Force jets back and forth to the Middle East have frequently stayed there while refueling at the nearby Prestwick airport.

Trump could afford to loan those golf carts to the Secret Service when he plays golf. But you want to know why he doesn’t? Because as rich as Trump is, he’s never rich enough. He’s going to keep grubbing every nickel he can from the Treasury as long as he can, which is one big reason he’s trying to steal another election. He loves the presidential lifestyle. He loves being picked up in a helicopter and flown out to Air Force One and being taken anywhere he wants to go. All he has to do is pick up the phone and say, “Take me down to Louisiana. I’ve got a rally.” Off he goes, and it doesn’t cost him a nickel.

The FBI was investigating the Trump campaign back in 2016 when it was colluding with Russia to use the stolen Democratic emails to defeat Hillary Clinton, but they didn’t catch him in the act. Robert Mueller spent nearly two years, from May of 2017 to March of 2019, investigating the links between Trump, his campaign and the Russians who hacked the Democrats’ emails. He couldn’t establish enough evidence to prove a criminal conspiracy.

But when some unknown person in the CIA blew the whistle on Trump’s phone call with Zelensky, and when Trump himself released the White House “notes” from the call, he got caught in the act. He had to try to steal another election. He doesn’t think he can win otherwise.

Have you noticed whose name we haven’t heard since the House took up its investigation of the attempted bribe of Ukraine to help in Trump’s reelection? Brad Parscale, the campaign manager for Trump’s re-election. You would think that if Trump wants to win in 2020, we’d be reading stories of Trump huddling on Air Force One with Parscale discussing campaign strategy and tactics. We’d be reading about their plans to take the “blue wall” states of the Midwest again, how they’re going to rack up even more electoral votes this time than they did in 2016.

But have you seen any of those stories? Neither have I. You want to know why? Because Trump doesn’t believe he can win with a good, well-run, well-funded campaign. Trump believes the only way he can win is by cheating — by stealing another election.

That’s why the stories you’ve been reading have been about gerrymandering and voter suppression and voter purges in states like Georgia and Ohio. That’s why you’ve been reading stories about how polling places have been closed in state after state, almost all of them in inner cities packed with Democratic voters. Trump and the Republicans are losing the demographics, so they’re trying to fix the electoral fight.

Trump doesn’t think he can win with Brad Parscale, so he tried to get Volodymyr Zelensky to chip in and help, and he tried to use $400 million of our taxpayer dollars as a bribe. He stole the election in 2016 with the help of Vladimir Putin, but his time he got caught. This is what Democrats should be running on for 2020. Trump is a cheap, money-grubbing thief who is enriching himself off the presidency, and he’s trying to steal another election to keep the grift going. That’s why he’s being impeached. We can win the 2020 election with that argument.