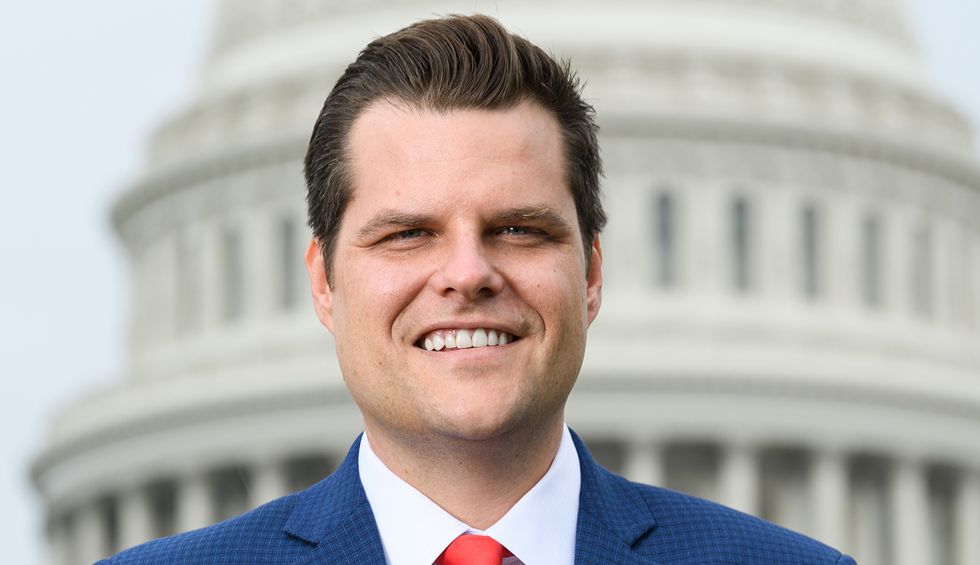 In a brutally blunt look at Rep. Matt Gaetz (R-FL), the New Republic’s Jacob Bacharach paints a portrait of a publicity-seeking Washington newcomer storming the nation’s capital with an eye on mirroring the actions and rhetoric of the blustery president that he slavishly defends.

Following Gaetz’s “drama queen” performances while serving on the House Judiciary Committee, Bacharach recalls, “On October 23, a gaggle of House Republicans, led by Matt Gaetz of Florida, stormed the Capitol’s Sensitive Compartmented Information Facility. Gaetz had hoped to expose the supposedly secretive nature of the impeachment inquiry into Donald Trump. “Stormed” was his own overly dramatic word (though Gaetz soon topped it by comparing his crew to the 300 glorious, nearly naked Spartans who, as you may recall, lost to a numerically superior force during the Battle of Thermopylae). A more accurate description would be to say they barged into a committee room like a bunch of entitled fussbudgets, argued with the committee chairman, took selfies, and then trundled off to hold a press conference.”

According to the author, this was just a taste of what can be expected from Gaetz, who he also described as a “selfie-seeking frat boy,” with Bacharach writing, “Even before he, ahem, ‘stormed”’the SCIF, though, Gaetz was a regular on Fox News, confidently regurgitating conservative talking points and jumping at every opportunity to trash the Green New Deal with his own half-baked legislative riposte, a.k.a. the Green Real Deal.”

“Gaetz, who is only 37, has the air of a guy you might run into at a 10-year reunion, bragging about babes and brewskis while droning on about a vast luxury SUV he’d only been able to afford because he’d inherited an auto dealership or pizza chain from his dad,” the profile continued, noting that “Gaetz’s father funded his son’s Washington ambitions through a series of questionable property sales. Buoyed by family money—and the solidly Republican politics of Florida’s western panhandle—Gaetz arrived in the nation’s capital in 2017 eager to attract the notice of the biggest Republican daddy of all by going on TV.”

“The Trump era has given rise to any number of half-baked theories about reality TV bleeding into politics. Critics have posited that the president is staging a grander and more deranged version of The Apprentice from the Oval Office,” Bacharach suggests. “In Gaetz, however, we do, at last, have some semblance of a contestant willing to perform any trick to win. He has internalized the most elemental truth of the reality show: Each season is defined not by its winners, but by its villains—the scoundrels who don’t ‘come to make friends.'”

Having said that, the New Republic writer suggests Gaetz may have made inroads with Trump’s rabid base and that could assure his political future.

“A selfie-seeking frat boy is perhaps not the most obvious inheritor of the conservative movement. But Gaetz embraces Trump’s powerful instinct for never caring what people think of him,” the author writes. “At an impeachment hearing on Thursday, Gaetz questioned why a Ukrainian energy company would hire Joe Biden’s son, given his history of substance abuse: ‘It’s a little hard to believe that Burisma hired Hunter Biden to resolve their international disputes when he could not resolve his own dispute with Hertz rental car over leaving cocaine and a crack pipe in the car.’ He did this without apparent irony, all in service of a Republican conspiracy theory. Florida has never given us a president, but I would not bet against Matt ­Gaetz.”