My darkest nightmare about Trump from 2016 is coming true. It's worse than I feared 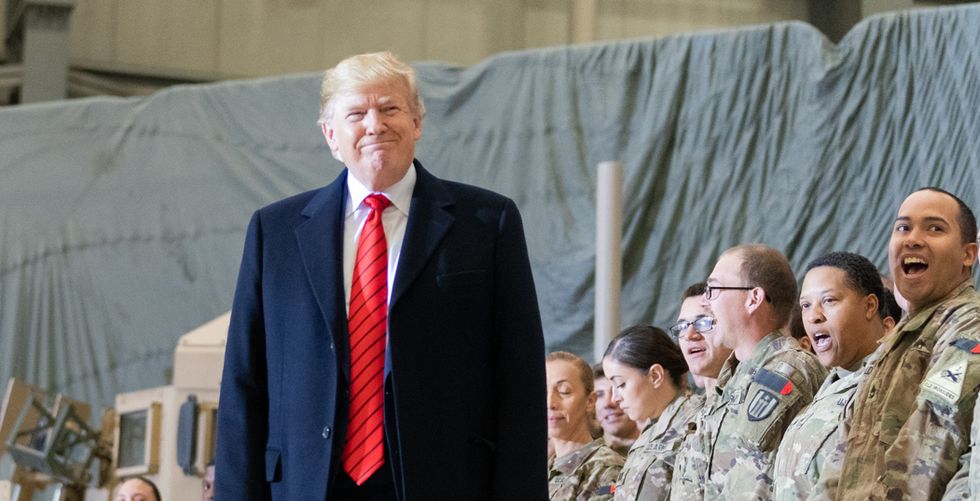 When Donald Trump was running his horrifying 2016 campaign for president, it was still quite difficult to imagine what an administration with the bloviating reality TV star at its helm would look like. But in one of the darkest articles I wrote at the time imagining a scenario for his potential presidency from the vantage of March 2016 — when I and many others still assumed a "President Trump" was an unlikely possibility — I foreshadowed a series of events disturbingly similar to those playing out in 2019.

In an article for Patch, I reacted to former General and Director of the CIA Michael Harden's contention that if a President Trump acted on an idea that the candidate had been proposing — targeting the families of terrorists — the military would be obligated to disobey him.

Trump's advocacy of war crimes on the campaign trail deeply disturbed me, and so I wanted to give readers an idea of what his words could actually mean if implemented. (Meanwhile, a Trump spokesperson complained that he was being taken "literally.")

Picture this: Within the first month of Donald Trump's inauguration, there is widespread unrest in the Middle East. An American embassy is attacked. There are several fatalities.

Furious, and looking to distinguish himself from President Obama and Hillary Clinton, Trump pledges a retaliatory response so extreme no one will ever think of attacking the United States again. He gives an order he promised to give on the campaign trail, telling the military leaders to hunt down and kill any known family members of the terrorists.

Only the generals refuse.

It's a wild scenario – but it's not unthinkable. Trump's entire campaign has been outlandish and unpredictable, and no one can confidently predict where it will take the country should he become president. If he's taken for what he says on the campaign trail, though, military refusals of the commander in chief are as likely as not.

That exact scenario didn't occur, of course. But Trump has embraced war crimes as president, just as he did as a candidate. He used his pardon power for service members accused of war crimes — and he has defended doing so in a frightening tweet:

The idea that military service members are supposed to be "killing machines," and thus that we ought to let them get away with acting as such, is anathema and contrary to U.S. law. But by using his presidential authority to give cover for war crimes — and unprecedented move by a U.S. commander in chief in modern times — he is unequivocally encouraging others to do the same. He doesn't want other soldiers to feel encumbered by trivial things like the laws of war.

The Nation wrote a headline on the matter that read: "Trump Doesn't Care About War Crimes." But that's not quite right. He does care — he seems to think they're actively a good thing that he wants to encourage, which is why he proposed them during the 2016 campaign. Adam Serwer, writing for the Atlantic, was more on point when he wrote recently: "Donald Trump is a war-crimes enthusiast."

On the campaign trail, Trump frequently invoked a false story about General John Pershing crushing a Muslim insurgency in the Philippines with bullets dipped in pig’s blood, declaring, “There was no more radical Islamic terror for 35 years!” He vowed to impose torture techniques “a hell of a lot worse than waterboarding.” Trump declared that he would “take out the families” of terrorist suspects, assuring skeptics that the military would not refuse his commands, even though service members have a duty to refuse orders that are manifestly illegal. “If I say do it, they’re going to do it.”

Although Trump was talked out of authorizing torture by his advisers, the president’s ardor for violations of the laws of war has manifested itself in his decisions to intervene in war-crimes cases on behalf of the defendants. In four separate cases since the beginning of his presidency, and for the first time in the history of modern warfare, an American president has aided service members accused or convicted of war crimes, against the advice of his own military leadership.

It seems Trump has also pursued another war crime he talked about a lot in 2016: stealing foreign oil as the spoils of war. Trump continues to talk about "keeping the oil" in Syria by using the U.S. military. Law professor James Stewart wrote recently in the Washington Post: "Keeping Syria’s oil could well constitute pillage — theft during war — which is banned in Article 33 of the Fourth Geneva Convention and the 1907 Hague Laws and Customs of War on Land."

Last week, one part of the scenario from my 2016 article played out. Navy Secretary Richard Spencer was ousted from his position in a dispute over one of the war crimes cases in which Trump intervened.

But to be honest, the reality is in some ways worse than I feared. I thought there could be mass resignations if Trump tried to actually implement his enthusiasm for war crimes. So far, that seems unlikely — Spencer's objections seem to be the exception, not the rule. Even more devasting is that, though I didn't write this at the time, I had simply assumed that much of the GOP would be aghast at Trump pursuing war crimes as policy. Instead, as it happens with almost everything else this president does, his Republican allies either shrugged or cheered him on.

When I asked the Pentagon in 2016 about the brutal and illegal scenarios Trump was proposing, it told me at the time: "We don't usually deal with hypotheticals over here." (This isn't true, of course. The Department of Defense and the U.S. government broadly prepares for many future contingencies.)

It would have been better if we had all taken Trump's "hypotheticals" more seriously.

Jeff McMahan, a philosopher who has written a book on the ethics of war, told me in 2016:

"It's just imbecilic to say that what one needs to do when dealing with terrorists is go after their families," said McMahan. "That's what terrorism is: going after people's families; killing or harming innocent people as a means of trying to affect the behavior of others."

"Then, if he starts doing this, going after the families of terrorists, then he is a terrorist."

The lasting consequences of Trump's leniency and advocacy of war crimes is not yet entirely clear, and though they were the focus of my direst public warning about his presidency, they may not even be among the most horrifying part of his tenure. Trump's neglect of Puerto Rico during Hurricane Maria, his abusive treatment of migrants, and his empowerment of foreign dictators — to name just three examples — may arguably be worse. But pushing for the acceptability of war crimes in the United States, and lining up an American political party in defense of these actions, is a perilous precedent to set that can't be undone. It's impossible to know where it might lead.

And it's unsettling to know and experience the fact that this was all foreseeable, and in fact, foreseen. Many of us warned about what Trump could bring. And now we're watching it unfurl.