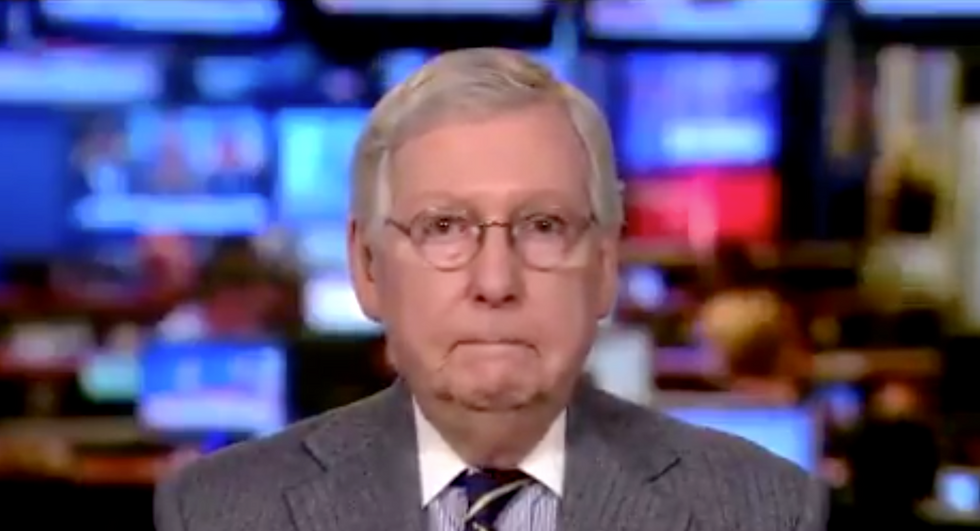 Senate Majority Leader Mitch McConnell said clearly on Thursday what many have assumed: When articles of impeachment come over from the House of Representatives, as is expected, to his chamber, he will be acting virtually as President Donald Trump's defense attorney.

"Everything I do during this, I’m coordinating with White House counsel," he said on Sean Hannity's Fox News show. "There will be no difference between the President’s position and our position as to how to handle this."

He noted that, unlike the many other issues that come to his chamber, he's unable to block impeachment. If it comes, he has to hold a trial, he admitted somewhat ruefully.

"We have no choice but to take it up, but we'll be working through this process, hopefully in a fairly short period of time, in total coordination with the White House counsel's office, and the people who are representing the president in the well of the Senate," he said.

No one is really expecting Republicans to give impeachment a fair shot. It is, inevitably, a political process, and whether the charges and the facts warrant removing the president is ultimately a political judgment. With a majority of the Senate occupied by members of the president's party, the party in lockstep with Trump, a two-thirds vote needed to remove the commander in chief, there appears to be little sign that control of the White House is truly in jeopardy.

But Lawfare's Ben Wittes noted on Twitter: "It’s very hard to reconcile this statement by McConnell with the special oath senators are required to take in impeachment trials under the rules."

He added: "It will read: 'I solemnly swear ... that in all things appertaining to the trial of the impeachment of Donald J. Trump, now pending, I will do impartial justice according to the Constitution and laws: So help me God.'"

This story has been updated to reflect Wittes' comments.