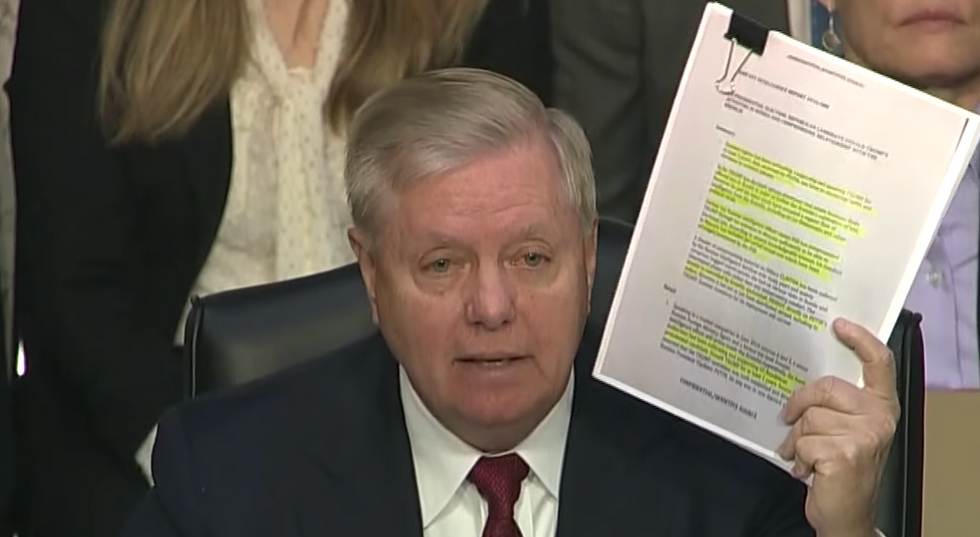 Sen. Lindsey Graham opened the Senate Judiciary Committee hearing with Justice Department Inspector General Michael Horowitz about his report on the FBI investigation into ties between the 2016 Trump campaign and Russia by first tossing out a few general paragraphs—mostly about how he never makes long opening statements. That was the precursor for Graham to break into an opening statement that rambled on, and on, and on, rehashing every aspect of the Russia investigation, including things that had absolutely nothing to do with anything Horowitz was investigating.

In the course of his 45-minute-plus statement, punctuated by shuffling through papers and frequent references to “smelly people,” Graham went through not just the Russia investigation but tangential events, false claims, and, of course, dozens of text messages. Naturally, that included reading through a whole series of texts between (say it with me) Peter Strzok and Lisa Page. Because nothing satisfies a Republican audience more than hearing texts between two people having an affair. For the ten-thousandth time.

Notably. Graham read through a whole series of comments made months before the election of Donald Trump and complained that Strzok and Page didn’t respect their “commander in chief.” It’s worth pausing for a moment to consider that, in the exact same period in which the texts were sent, Graham described Trump as “a kook” who was “unfit for office.” In fact, Graham directly said that Trump is “not qualified to be commander in chief.” Graham also offered the advice, “You know how to make America great again? Tell Donald Trump to go to hell.”

Those past comments somehow did not make it into Graham’s opening. What did make it, delightfully enough, was Lindsey Graham discussing that the opening document from the research provided by Christopher Steele included Trump being involved in “a golden shower,” and making it clear that this was an incident involving prostitutes in a Moscow hotel room. Graham also explained that he was shown this material not by Democrats but by John McCain, and that on seeing the document, his first thought was, “They have something on Donald Trump.” During the opening, Graham also complained that “my goddamned name is all over the legal documents investigating Trump’s staff.” Which might be because he constantly referred to Trump as a “threat,” as “completely unhinged,” a “racist,” a “liar,” and an “opportunist” who would do anything to win.

For 45 minutes, Graham seemed to be half-interested in pointing out that everyone hated Donald Trump, when he wasn’t demeaning Christopher Steele. And then Sen. Dianne Feinstein talked for three minutes, and slaughtered everything he said.

Graham ended by spending over 10 minutes directly attacking Steele, who, Graham assured everyone, was “the worst” of the whole bunch. That included Graham looping around again to talk about the contents of the dossier— setting up the opportunity for a thousand “golden shower” YouTube clips.

Then Feinstein spoke briefly and read directly from the report, showing that the inspector general found no political bias in the opening of the investigation. “This was not a politically motivated investigation. There is no deep state.”  And in case no one noted the facts, she made it clear that, “Despite what some have said … reporting from Mr. Steele played no role in opening the investigation.” For some, please read “the guy who just shut up one minute ago.”

Feinstein noted that everyone who keeps focusing on trivia from three years ago appears completely unconcerned about much more significant events happening right now. “Those who show a great interest in politically motivated investigations against President Trump,” said Feinstein, “should show the same interest in politically motivated investigations ordered by President Trump or his attorney general.”

But, fittingly enough, Graham made it clear that simply making a declaration that it doesn’t matter that Horowitz found no political bias, or that the FBI report completely contradicted the same conspiracy theories he voiced in his opening statement, is all it takes to dismiss the report, because “Whether you believe it or not,” as he said to Horowitz, “I believe it.” And that’s all that matters.