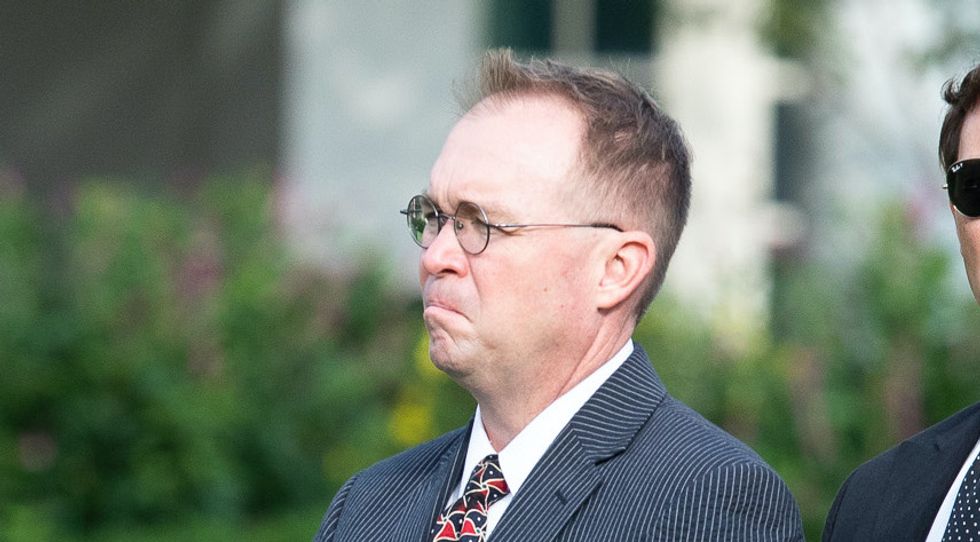 White House Chief of Staff Mick Mulvaney and White House Press Secretary Stephanie Grisham look on as the Color Guard prepares to post the colors for a moment of silence on the South Lawn of the White House Wednesday, Sept. 11, 2019, in remembrance of those lost on September 11, 2001. (Official White House Photo by Keegan Barber)
Cody Fenwick
December 03, 2019News & Politics

With the release of the Ukraine report from the House Intelligence Committee on Tuesday, Chair Adam Schiff and his colleagues laid out the damning case for impeaching President Donald Trump in excruciating detail. Much of it, however, has been publicly known as transcripts of the inquiry depositions and public hearings revealed the key facts of Trump's effort to induce Ukraine into investigating his political rivals while withholding military aid and White House meeting.

But because of Trump's stonewalling — which itself features as a pillar of the president's misconduct in the report — Republicans have argued that Schiff and the Democrats haven't persuasively made the case that Trump was a part of the effort to leverage official acts in exchange for the political investigations. While extensive evidence strongly suggests that Trump was at the center of the scheme, not one witness' testimony tied Trump directly to the quid pro quo.

The Ukraine report, however, gets around this fact by pointing to key statements not as a part of the inquiry itself, but made in public by White House Chief of Staff Mick Mulvaney and Trump himself.

"On October 17, at a press briefing in the White House, Acting Chief of Staff Mick Mulvaney confirmed that President Trump withheld the essential military aid for Ukraine as leverage to pressure Ukraine to investigate the conspiracy theory that Ukraine had interfered in the 2016 U.S. election," the report explained. "As Dr. [Fiona] Hill made clear in her testimony, this false narrative has been promoted by President Putin to deflect away from Russia’s systemic interference in our election and to drive a wedge between the United States and a key partner"

According to Mr. Mulvaney, President Trump “[a]bsolutely” mentioned “corruption related to the DNC server” in connection with the security assistance during his July 25 call. Mr. Mulvaney also stated that the server was part of “why we held up the money.” After a reporter attempted to clarify this explicit acknowledgement of a quid pro quo, Mr. Mulvaney replied: “We do that all the time with foreign policy.” He added, “I have news for everybody: get over it. There is going to be political influence in foreign policy.”

Ambassador Taylor testified that in his decades of military and diplomatic service, he had never seen another example of foreign aid conditioned on the personal or political interests of the President. Rather, “we condition assistance on issues that will improve our foreign policy, serve our foreign policy, ensure that taxpayers’ money is well-spent,” not specific investigations designed to benefit the political interests of the President of the United States.

This is particularly damning. When it happened, I called Mulvaney's stunning press briefing an "avalanche of confessions." So despite the fact that Mulvaney, as a part of the president's stonewalling, defied a subpoena to testify before the inquiry, his own voluntary remarks play a key role in the report.

It doesn't note, as I also previously argued, that Mulvaney's subsequent efforts to lie and say that he didn't confirm the quid pro quo — even though he unequivocally did — actually strengthens the case that his admission was damning.

The report goes on:

In contrast, President Trump does not appear to believe there is any such limitation on his power to use White House meetings, military aid or other official acts to procure foreign help in his reelection. When asked by a reporter on October 3 what he had hoped President Zelensky would do following their July 25 call, President Trump responded: “Well, I would think that, if they were honest about it, they’d start a major investigation into the Bidens. It’s a very simple answer.”

This isn't the only point in the report when Trump's own public words were used against him. It noted that Trump denied remembering July 26 call with Ambassador Gordon Sondland, a key player in the scandal, in which they explicitly discussed getting Zelensky to do the political investigations. Though Sondland, too, initially failed to mention this call to the inquiry, later, he "noted that White House call records made available to his legal counsel confirmed that the July 26 call in fact occurred." This suggests Trump clearly thinks he has something to hide in the scandal.

Unfortunately, though, the report seems to neglect another piece of evidence I flagged recently. In an interview with Fox News on  Nov. 22, Trump essentially admitted to the key charge against him — leveraging the military aid to get the investigations he wanted. It wasn't necessary to prove the case — Mulvaney's comments and the other evidence do that — but it makes it even starker and reveals that, to this day, Trump can't grasp what he did wrong.