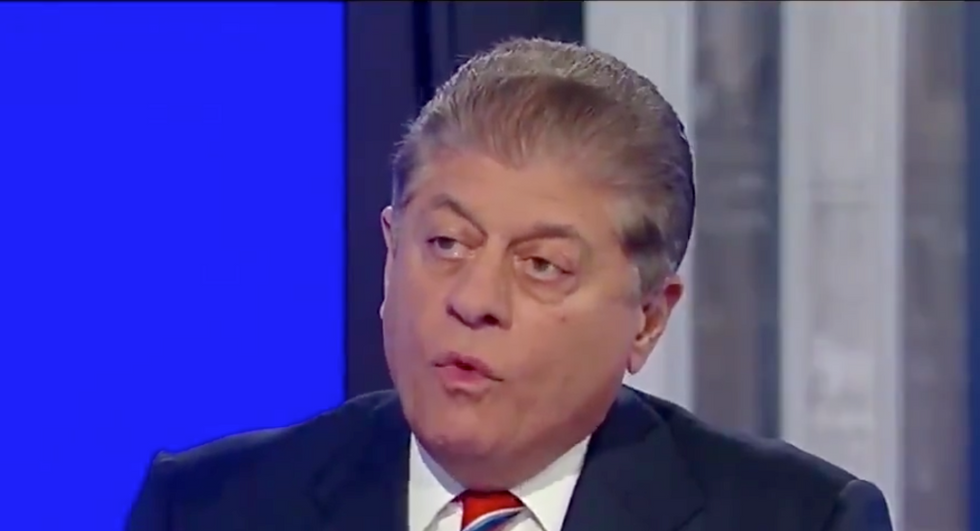 Fox News legal analyst Andrew Napolitano published an op-ed in the Washington Times on Wednesday as President Donald Trump stood on the cusp of impeachment.

Trump, Napolitano argued, committed to clear crimes in his effort to pressure Ukraine to investigate former Vice President Joe Biden, and he must be impeached.

"That presidential behavior implicates two crimes. One is the federal prohibition on soliciting campaign aid from a foreign government — whether the aid arrives or not. It did not," he wrote. "The other crime is bribery, which is the exploitation of public duties for personal gain. Bribery consists of the intentional refusal to perform a required public duty — here, releasing the $391 million to Ukraine — until a personal thing of value — here, the announcement of the Ukrainian investigation of Mr. Biden — arrives. The crime of bribery is complete when the thing of value is solicited, whether it arrives or not. It did not."

He added: "The other crimes implicated by Mr. Trump’s behavior took place after he was accused of the first two. Then, he directed his subordinates to disregard congressional subpoenas, lawfully issued and validly served, which sought testimony, documents and electronic records of the president’s behavior."

And by refusing to mount a defense against the allegations against him contained in the House of Representatives' articles of impeachment, Napolitano argued, "the facts underlying the charges against Mr. Trump are essentially uncontested."

Napolitano's approach of focusing on criminal violations Trump may have committed differs somewhat from the Democrats' focus in the articles of impeachment. They accuse Trump of broadly abusing his power and obstructing Congress. While the House Judiciary Committee concluded that Trump did, in fact, commit crimes in furtherance of his abuses, it argued that this is not necessary to make such a finding to impeach Trump.

But Napolitano zeroed in on the implications of Trump's conduct being criminal. He argued that since the Justice Department has repeatedly found that a president can't be charged with a crime while in office, impeachment is the only method for addressing presidential criminality.

"Everyone who believes in the rule of law should be terrified of a president who thinks and behaves as if it does not apply to him," he wrote. "As the DOJ has stated repeatedly, impeachment is the proper constitutional remedy for that."