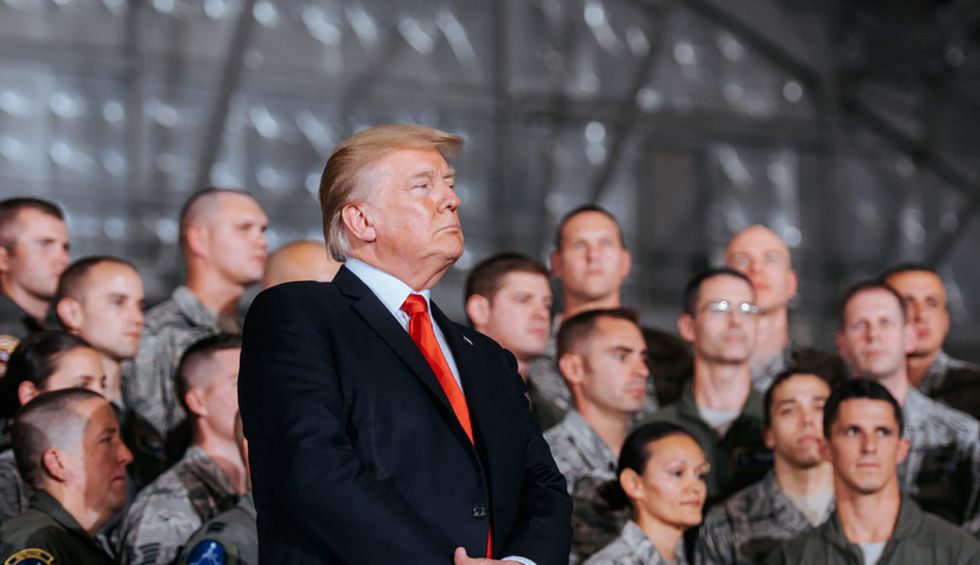 On the same day Columbia University busted a top Trump administration official for plagiarizing, The New York Times busted the president of the United States for tweeting false quotes to his huge Twitter following.

"Watching Fox News ahead of Wednesday’s impeachment vote, President Trump gave a Twitter call out to one of his most combative allies in the House," Times reporters Annie Karni and Maggie Haberman explained.

"In his tweet, Mr. Trump quoted approvingly from what Representative Doug Collins, Republican of Georgia, had said on 'Fox & Friends' about the two impeachment articles passed by the House — that they were the product of Democrats who 'couldn’t find any crimes so they did a vague abuse of power and abuse of Congress, which every administration from the beginning has done.' But in fact, Mr. Collins never made the claim that “abuse of power and abuse of Congress” were common practices of past administrations," the newspaper reported.

That incident was part of a pattern documented by The Times.

"The Wednesday morning post was just the latest example of Mr. Trump, who rails against the 'Fake News,' doing his own kind of editing of comments made by top administration officials and other prominent allies," the paper reported. "Mr. Trump has made a habit of injecting his own words into the comments of people he sees on television and then publishing them as direct quotes on Twitter, where he has more than 67 million followers."

And most Republicans just go along with it.

"More often than not, the allies who Mr. Trump misquotes do little to publicly contradict him. Sometimes a lawmaker’s office will simply point reporters to the transcript when asked about the disconnect. They rarely call out Mr. Trump for spreading falsehoods or altering the meaning of their words," The Times reported.

.@ruthbenghiat: "“He’s challenging them to correct him. This is how a cult of personality works. The leader will sa… https://t.co/VGVbRCfPTP
— Annie Karni (@Annie Karni)1576885877.0

McConnell, McCarthy, Collins, Rick Scott have all been featured in Trump tweets with quotes attributed to them that… https://t.co/nozz337zV0
— Maggie Haberman (@Maggie Haberman)1576888541.0