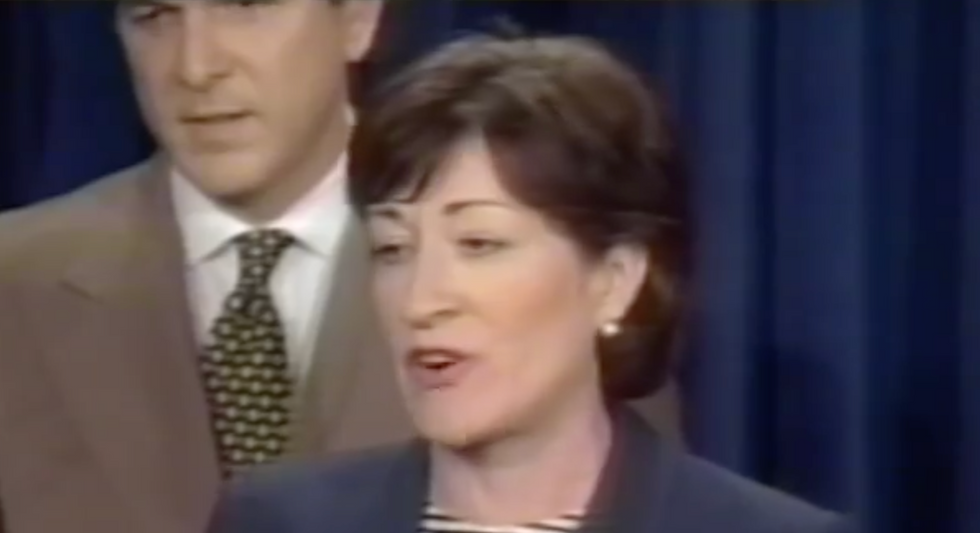 Republican Sen. Susan Collins of Maine is seen as one of the potential swing votes in the upcoming Senate trial of President Donald Trump. This means that not only does she have the power to deny Trump the complete support in of his own party, but she could have significant power to shape the course of the Senate trial itself.

Though she has split with the president occasionally on various issues, she also continually makes clear that she'd rather not make any hard choices if she can avoid it. She's been mocked for frequently expressing her concern or saying she's "troubled" by things the president does, while she avoids doing much if anything to curb his behavior. She's also facing extreme electoral pressure, as her seat is up in 2020 and she looks to be facing one of the toughest Senate races in the country.

That's why new video that's been unearthed, as reported by the Washington Post, could put her and her party in a difficult position.

The C-SPAN clip from January 27, 1999, shows Collins, a senator even back then, discussing the then-ongoing impeachment of President Bill Clinton.

"I am willing to travel the road wherever it leads, whether it’s to the conviction or the acquittal of the president,” Collins said. “But in order to do that, I need more evidence. I need witnesses and further evidence to guide me to the right destination, to get to the truth.”

She continued: "There is indeed a mountain of evidence. But there is also a record that is replete with conflicting statements, with significant gaps, and with unanswered questions. We need to answer those questions in order to fulfill our duty to do impartial justice. I want to be fair to the president, I want to give him the opportunity to have his lawyers question witnesses if, in fact, we get to that stage.” (Collins eventually voted to acquit Clinton on both articles of impeachment.)

These comments seem to be in tension with th view of Republican Senate Majority Mitch McConnell, who hopes to dismiss the charges against the president as quickly as possible.

"The House chose this road," McConnell told reporters on Tuesday, rejecting Minority Leader Chuck Schumer's request for witnesses at the Senate trial. "It is their duty to investigate. It is their duty to meet the very high bar for undoing a national election. If they fail, they fail. It is not the Senate's job to leap into the breach and search desperately for ways to get to 'guilty.' That would hardly be impartial justice."

He added: "If House Democrats' case is this deficient, this thin, the answer is not for the judge and jury to cure it here in the Senate. The answer is that the House should not impeach on this basis in the first place."

McConnell went on to say that, during the Clinton impeachment, the question of whether to call witnesses was addressed during the trial, not at the start. Clearly, though, he wants to rush through the process and acquit Trump as quickly as possible. Allowing more evidence to be heard that could make Trump look even worse might make McConnell's task more difficult.

Collins' previous statements make clear that she thinks it's appropriate and likely necessary for the Senate to call witnesses. She told the Post in a statement: "I’m not going to make a judgment on the witness issue yet ... At the trial of President Clinton, no witnesses testified in person, but the Senate ordered depositions to be taken from three witnesses.”

While Democrats have argued, as I have, that the evidence against Trump is already overwhelming and damning, some Republicans have argued that the case against Trump is insufficient. But if this is their argument, it only makes the need for the Senate to call witnesses more compelling. And regardless, more evidence in the case could certainly be illuminating. Many people close to Trump, including Secretary of State Mike Pompeo, Rudy Giuliani, former National Security Adviser John Bolton, Energy Secretary Rick Perry, and White House Chief of Staff Mick Mulvaney are all important witnesses in the Ukraine scandal, but thus far they have been deposed. Trump's own testimony could itself be called for.

It will be difficult for Collins or other Republicans to take the position that the evidence is not yet clear in the case as a justification for acquitting Trump if the Senate refuses to use its formidable power to obtain witness testimony, especially given Collins' past comments about the impeachment of a Democratic president. The alternative, of course, is that they could just accept Trump's conduct wholesale and argue that nothing he ever did was wrong.