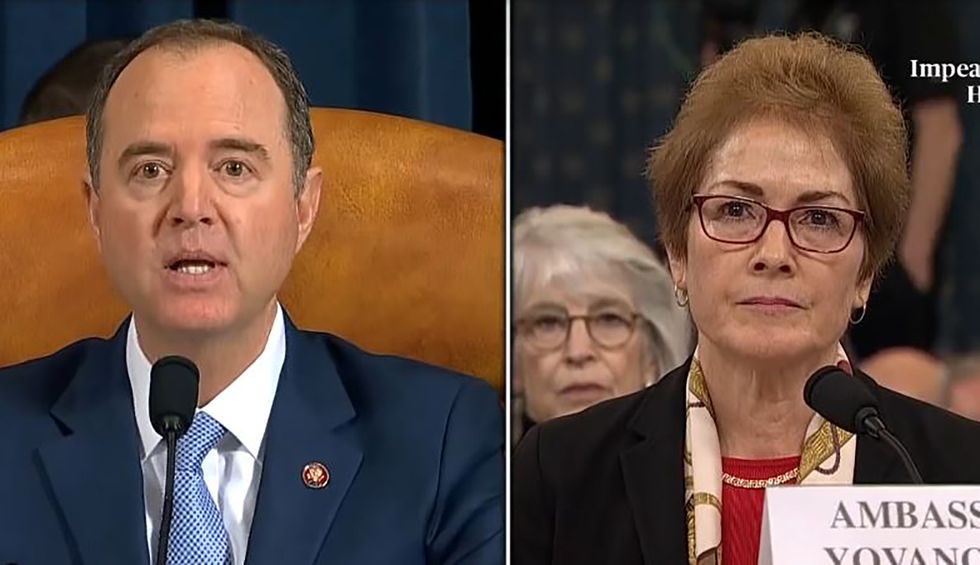 Former Ukraine ambassador Marie Yovanovitch was asked to react to President Donald Trump’s online attacks as she testified before the impeachment inquiry.

Daniel Goldman, the counsel for House Democrats, had been asking the ousted ambassador about the president’s threats and smear campaign against her, and Rep. Adam Schiff (D-CA) paused the testimony to read aloud the tweets Trump had sent out just minutes earlier.

“I don’t think I have such powers not in Mogadishu and Somalia and not in other places,” Yovanovitch testified. “I actually think that where I’ve served over the years, I and others have demonstrably made things better, you know, for the U.S., as well as for the countries that I’ve served in. Ukraine, for example, where there are huge challenges including, you know, on the issue that we’re discussing today of corruption, huge challenges, but they have made a lot of progress since 2014 including in the years that I was there, and I think, in part, I, meaning the Ukrainian people get the most credit for that because apart of that credit goes to the United States and to me as the Ambassador because — in Ukraine.”

“Some of us here take witness intimidation very, very seriously,” Schiff said, and then sought evidence that the president had indeed committed a crime with his tweets. “It’s designed to intimidate, is it not?”

Yovanovitch told the Intelligence Committee chairman that she could not speculate on the president’s state of mind in tweeting the attacks, but she agreed that she felt intimidated by the posts.