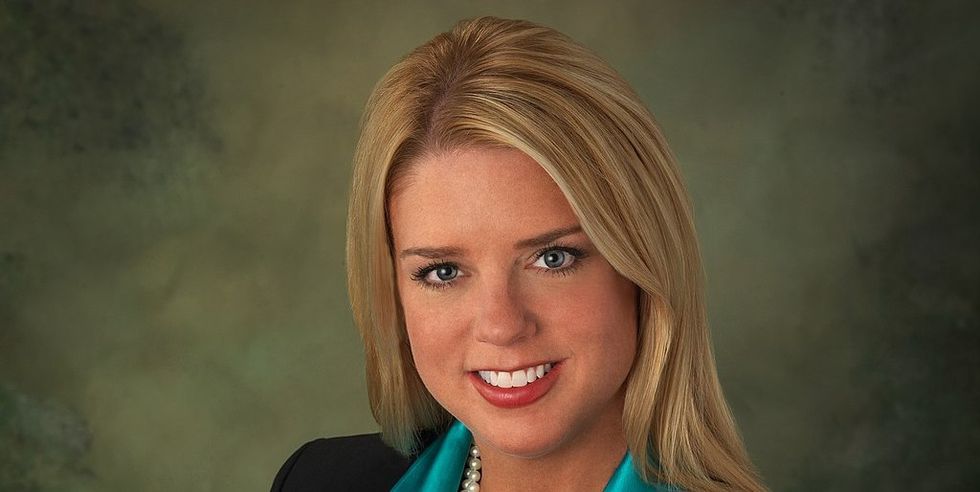 While the discussion of President Donald Trump's Ukraine scandal has revolved around the question of "quid pro quo," the central allegation at the heart of the matter is a much more common word that happens to appear in the U.S. Constitution: bribery.

And now, according to the Wall Street Journal, Trump is planning to hire Pam Bondi as a lawyer to help handle the impeachment, even though she just happens to be a key figure in an entirely separate Trump scandal involving compelling accusations of bribery.

Bondi previously served as Florida attorney general, and in 2013 — after her office had received numerous complaints about the unscrupulous Trump University and as she faced questions about the case from the press — she solicited and received a $25,000 political donation from Trump. Despite the fact that New York Attorney General Eric Schneiderman brought a case against the fake university, which Trump ended up settling for a hefty $25 million, Bondi's office never brought a case.

Bondi claimed that she didn't know about the case and that it wasn't her decision to drop it. But the circumstances have always looked particularly suspicious, especially because of the irregularities in the donation.

Trump gave the donation through his personal charity, the Trump Foundation, which had many problems of its own and was eventually forced to close by the New York attorney general. The donation was in violation of the law — the foundation was not supposed to make contributions to political donations. Trump reportedly paid the foundation back for the money and paid a 10 percent excise tax on the donation after correcting the error.

Though the regulations do not explicitly state that foundations must do an EIN search, common sense dictates that that is the bare, bare minimum step that probably is necessary to verify accurately," Galle said. "Given a strong motive to conceal, the added risks of delay, and a literally unbelievably basic mistake, a reasonable person could well conclude that this was a deliberate effort to obfuscate."

The Associated Press reported that a state prosecutor later looked into the matter in 2017 and determined that it "lacks enough evidence to move forward." One person who filed complaints against Bondi, J. Whitfield Larrabee, called the decision to drop the case “a gutless move that was politically motivated.”

Part of the problem with the accusation of bribery in this case is that the Supreme Court has so substantially watered down anti-corruption law in the United States such that it is extremely difficult to prove in court. Trump and Bondi's conduct looks, on its face, plainly corrupt, but they may be able to get away with it if there's no way to demonstrate that Bondi specifically made the quid pro quo explicit.

It's with extreme irony, then — and perhaps not a small amount of public relations recklessness — that Bondi is now reportedly joining Trump's team to defend against an impeachment that includes, as we have seen, extensive evidence of quite explicit quid pro quo.