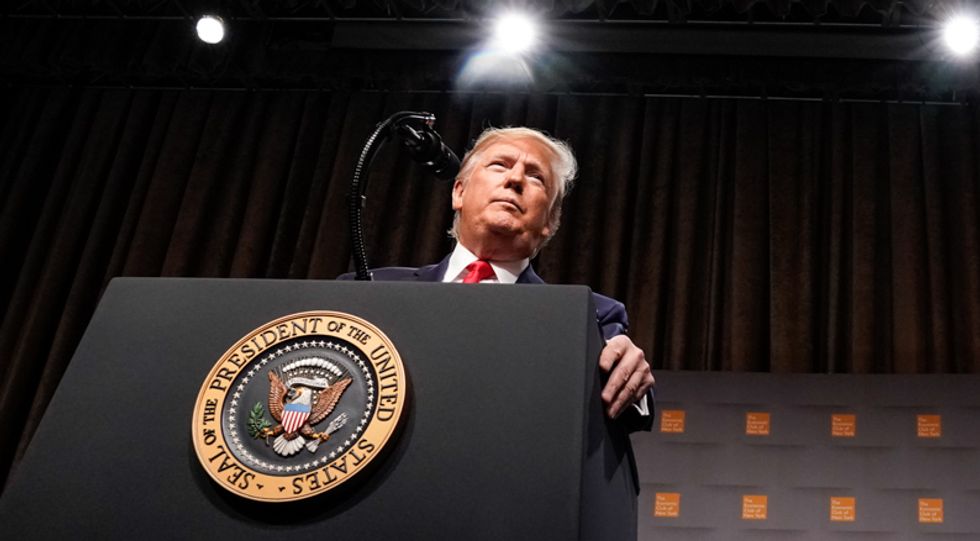 President Donald Trump went off-the-rails when he called in to "Fox & Friends" Friday morning. For 57 minutes straight with no commercials the fast-talking President spewed conspiracy theory after conspiracy theory, tossed around lies and personal attacks against top Democrats, including coming close to saying once again that President Barack Obama spied on him and his campaign.

"They thought I was going to win and said 'how can we stop him?'" Trump said of Obama and his administration.

"You’re dealing at the highest levels of government. They were spying on my campaign. This is my opinion,” Trump said.

Host Steve Doocy interjected: “How high did it go?”

“Personally, I think it goes all the way,” Trump replied. He then mentioned by name John Brennan, James Clapper, and Susan Rice.

Brian Kilmeade asks Trump who told him about Obama's (nonexistent) efforts to undermine him from the beginning, but… https://t.co/djuzb6HYc3
— Bobby Lewis (@Bobby Lewis)1574429247.0

Trump once again tossed out conspiracy theories about the DNC server that was hacked, claiming Democratic Party officials "gave the server to Crowdstrike."

The FBI says it got the forensic info it needed from CrowdStrike. Cybersecurity firms do not require the physical s… https://t.co/Qu4AfYLnRT
— Daniel Dale (@Daniel Dale)1574428366.0

To defend his illegal extortion of Ukraine Trump claims the U.S. is the only country giving money to Ukraine. That's false: