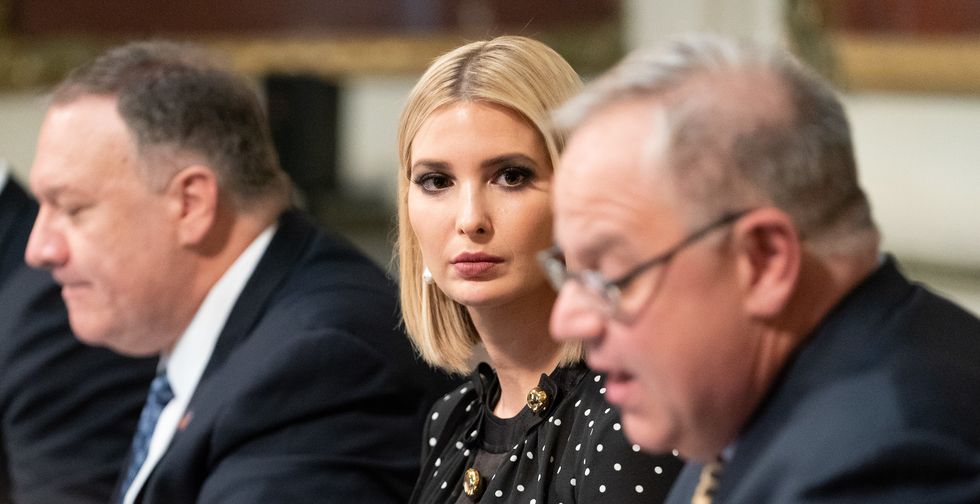 In a speech earlier this week, President Donald Trump credited his daughter Ivanka Trump with creating 14 million jobs since he took office, even though his own administration recently estimated that 6 million new jobs had been created during that time.

Trump boasted Tuesday in remarks delivered at the Economic Club of New York that his daughter, a White House adviser who co-chairs the American Workforce Policy Advisory Board, had created more than double the number of jobs that have actually been created since 2017. The American Workforce Policy Advisory Board, which Ivanka Trump co-chairs with Secretary of Commerce Wilbur Ross, was created earlier this year to build on a 2018 jobs initiative.

“My daughter Ivanka, that’s all she wants to talk about... she wants to make these people have great lives. And when she started this, two and half years ago, her goal was 500,000 jobs,” Trump said, referring to the board that the White House announced in February. “She has now created 14 million jobs and they are being trained by these great companies, the greatest companies in the world, because the government cannot train them. It’s a great thing.”

Trump’s comment came just weeks after the White House released an October 4, 2019 statement claiming that the economy had added 6.4 million jobs since Trump took office, less than half of the number Trump cited on Tuesday.

CNN fact-checker Daniel Dale noted that the jobs Trump referred to in his Tuesday speech were actually “education and training opportunities,” not employment. Dale added that many of those opportunities were for “existing employees” and many were planned “before” or “entirely independent” of the Pledge to America’s Workers.

The Pledge aims to bridge a “gap between skills of those seeking to enter the workforce possess and those sought by employers." When the advisory board launched in February, the White House told Bloomberg News that more than 200 companies and associations had signed the Pledge, which promised to "create more than 6.5 million education, training and skill-building opportunities over the next five years."

The number of companies grew to 350 by October, when the Associated Press reported that the initiative would “train or retrain” more than 14 million workers.

The report cited a commitment to train workers within five years, and did not mention any jobs created as a result of the program.

Ivanka herself has conflated jobs with training programs in the past.

“We’re up to 6.3 million new jobs,” Ivanka Trump said at a White House event to promote the initiative last year. But the company officials that signed the pledge told CNN after the event that the number Ivanka cited “largely represented a tally of already-planned training programs rather than the brand-new opportunities Ivanka Trump claimed.”

"Our understanding was that the intent of the event was to demonstrate what employer and labor groups were doing to train workers in the United States," Brian Turmail of the Associated General Contractors trade group told CNN. "It was a way to highlight investments they're already making."

"To be very candid, that number is a number that we heard from both our members and others, just an accumulation of 'I could use that based on the volume of work,'" Greg Sizemore, the group’s vice president for workforce development, told the CNN. "We have to, because of technology, retirement and attrition. You've got to educate."

When asked why the opportunities were advertised as “new,” the White House told CNN that “it didn't want to exclude companies and associations that already had training programs in place.”