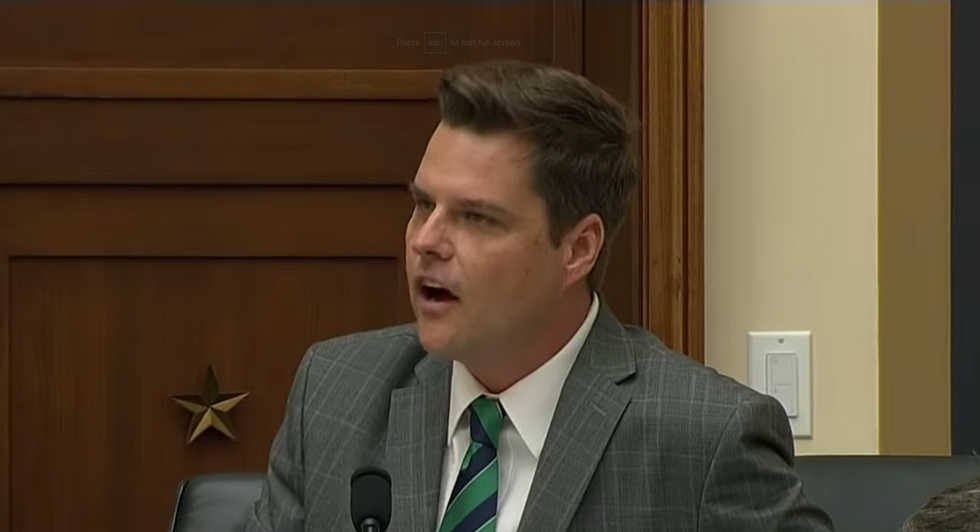 Republicans have been complaining for weeks that witness interviews in the inquiry were held in closed session, despite this process being fully consistent with the House rules and, as Schiff has argued, a prudential tactic when conducting a preliminary investigation into potential wrongdoing. At one point, to demonstrate their objections with a cheesy stunt, Gaetz led a group of fellow Republicans to storm a secure room where a deposition was set to take place in the inquiry. Several of them appeared to bring their phones into the location, a gross violation of security rules.

Gaetz insisted he should be allowed to attend Hill's deposition because he's part of the Judiciary Committee, which has jurisdiction over impeachment. But Schiff noted that, as a closed session, only members of the committees specifically conducting the Ukraine investigation were allowed to attend the deposition. Rep. Jim Jordan (R-OH) — who, like Gaetz, is a fervent Trump supporter to the point of absurdity — argued that Gaetz should be able to stay. Jordan's own presence in the hearing, which was permitted, undermined the argument that Republicans were somehow being unfairly excluded. Eventually, Schiff said all the delay tactics from Gaetz would be deducted from Republican's time to question the witness, and Gaetz relented and left.

Read the exchange from the transcript below:

THE CHAIRMAN: Mr. Gaetz, you're not permitted to be in the room.

MR. GAETZ: I am on the Judiciary Committee.

THE CHAIRMAN: Judiciary Committee is not a part of this hearing.

MR. GAETZ: I thought the Judiciary Committee had jurisdiction over impeachment.

THE CHAIRMAN: Mr. Gaetz, you're not permitted to be in the room. PIease 1eave.

MR. GAETZ: You 're going to include Members of Congress on committees that have roles of impeachment

THE CHAIRMAN: Mr. Gaetz, take your statement to the press. They do you no good here. So, please, absent

Mr. GAETZ: You're going to have someone remove me from the hearing?

THE CHAIRMAN: You're going to remove yourself , Mr. Gaetz.

MR. JORDAN: Mr. Gaetz is going to stay and listen to the testimony.

THE CHAIRMAN: Mr. Gaetz, you're going to leave the

MR. GAETZ: No, I think I have a right to be is there a rule you can cite as to why I am not

THE CHAIRMAN: You're not a member of this committee. This is conducted in closed session. You're not permitted to

THE CHAIRMAN: Mr. Gaetz, please absent yourself from the committee. It' s the ruling of the chair you're not permitted to be here. PIease leave the committee.

MR. JORDAN: Mr. Chairman, I think in the 20 hours of testimony we've heard in the two previous interviews, there

THE CHAIRMAN: Mr. Gaetz, you're not a member of the three designated committees that are participating in this

interview. You're not permitted to be here. That is the ruling of the chair, and you are required to 1eave.

MR. GAETZ: Do you have a rule that you're able to cite for that?

THE CHAIRMAN: I am citing the House rules and the deposition rules. You are not permitted to be here.

THE CHAIRMAN: Mr. Gaetz, you are simply delaying the procedures in violation of the rules. Please absent

THE CHAIRMAN: Mr. Gaetz, why don't you take your spectacle outside? This is not how we conduct ourselves in

MR. GAETZ: I've seen how you've conducted yourself in this committee, and I'd like to be here to observe.

THE CHAIRMAN: We'll wait until Mr. Gaetz leaves before we begin. I do want to say that this dilatory tactic will

come out of the minority's time for questioning.

MR. GAETZ: This isn't dilatory. You can begin any time you like.

THE CHAIRMAN: We're going to begin the clock. This will come out of the minority's time for questions.

THE CHAIRMAN: The record should reflect that Mr. Gaetz has left the room.