The road to expulsion: Here's a timeline of Devin Nunes' clandestine operations on the House Intelligence Committee 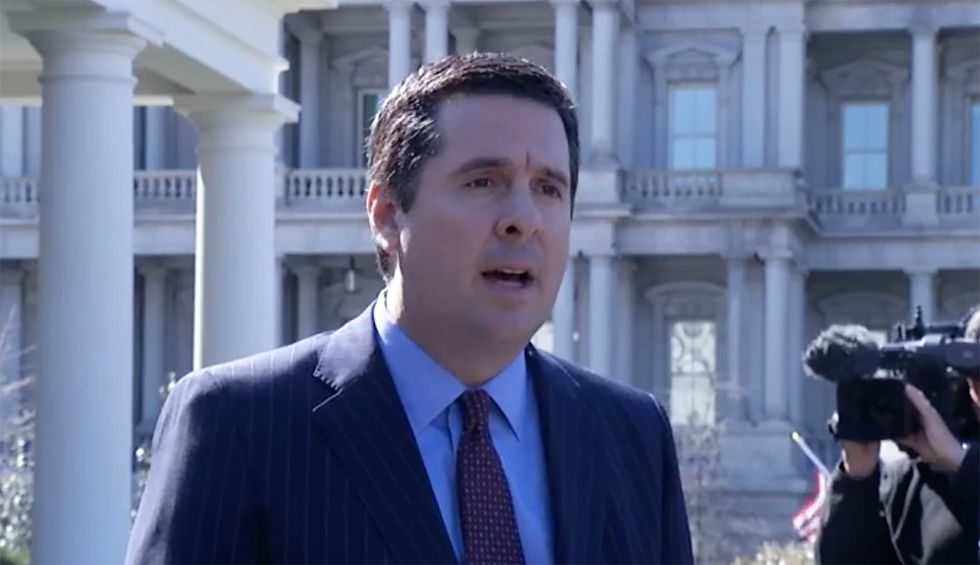 News that Devin Nunes has been sitting through the House impeachment inquiry, pretending to act as a investigator, while actually being an active participant in the scandal might be more shocking if this was the first time. Or the second. But the history of Devin Nunes’ time on the House Intelligence Committee is one that features a nearly unbroken streak of lies, corruption, and plain old idiocy.

As the machinery of the House cranks toward an another inevitable appearance of Nunes before the Ethics Committee—and Fox News opens up 10,000 hours of programming devoted to explaining why it’s perfectly okay for the ranking member of the Intelligence Committee to be traveling the world on the taxpayer dime, actively soliciting corrupt former officials for manufactured dirt that can be deployed in the 2020 election—here’s a little reminder that Double-Naught Nunes was never less than crooked. And ridiculous.

Mar 21, 2017 — Nunes leaps from an Uber car at a stoplight, leaving behind a senior Intelligence Committee staffer without explanation and disappears into the night. Nunes swaps to another car, travels somewhere, and shows up hours later to tell Paul Ryan he has uncovered evidence supporting Donald Trump’s claims that President Obama “spied” on him.

Mar 22, 2017 — Nunes launches the first of several press conferences in which he declares that he has secret information showing that the Obama administration spied on Trump. Then Nunes runs back to Paul Ryan, then he holds a second press conference during which it becomes clear that Nunes is both revealing classified information and sharing that information with the people supposedly under investigation by his committee.

Mar 23, 2017 — Nunes declares that his loyalty to Trump trumps any requirement that he either protect classified information or inform other members of his committee about his actions.

Mar 24, 2017 — Nunes cancels hearings without informing other committee members, leaving his own committee sitting without him, while he continues to work with his secret sources on allegations that “Obama spied on Trump.”

Mar 28, 2017 — Facing demands from other members of the House Intelligence Committee that he come clean about his multiple visits to “brief” the White House and his secret sources of information on “spying,” Nunes declares a date for when he’ll let the rest of the committee in on his information: “Never.”

Mar 29, 2017 — Nunes defends his series of bizarre acts and makes it clear that his goal is to halt the investigation into Trump’s Russia connections. Nunes’ increasingly unhinged performance earns him a dressing down from Lindsey Graham (really, Lindsey Graham) who calls Nunes’ actions an “Inspector Clouseau investigation.”

Mar 30, 2017 — Nunes’ secret sources for his supposed information are revealed as White House attorney Michael Ellis and Michael Flynn protege Ezra Cohen-Watnick, proving that Nunes was pretending to brief the White House … on information coming from the White House. On the same day, it’s revealed that Nunes’ complaints about a “refusal” of FBI Direct James Comey to appear before the committee result from the fact that Nunes never actually sent Comey an invitation to appear. Also on the same day, Sean Spicer refuses to confirm or deny that the White House and Nunes have been conspiring together to cook up the “spying” claim as a means of derailing the Russia investigation. (Spoiler: They have.)

Apr 6, 2017 — Nunes supposedly “steps aside” from the Russia investigation, but does not formally recuse himself. He blames “left wing activist groups” for his decision. But Nunes has barely ended the latest in his string of frothing press conferences when it’s clear that he’s actually under investigation by the Ethics Committee fore repeatedly spilling classified information.

Dec 7, 2017 — With the help of departing Republicans who hustled the action through before the House swapped into Democratic control in the coming year, the Ethics Committee simply closed the action against Nunes without having formal hearings—an act that Nunes declared a complete exoneration.

May 8, 2018 — The FBI warns the White House that Nunes’ is endangering undercover assets by demanding, and leaking, information and even Trump is forced to withhold information from Nunes after the FBI presents evidence that he cannot be trusted.

Aug 28, 2018 — Nunes travels to London and asks to talk with heads of both MI5 and MI6 in an effort to find someone who will support conspiracy theories about the “Steele Dossier” and provide dirt on former British intelligence officer Christopher Steele. (Spoiler: Neither intelligence chief would meet with him.)

Nov 30, 2018 — Nunes travels to  Ukraine along with three of his aids, and spends over $63,000 in a four-day visit in which it now appears that he met with corrupt former Ukrainian prosecutor Viktor Shokin for the express purpose of supporting Trump’s conspiracy theory against Joe Biden.

Mar 19, 2019 — Nunes sues a cartoon cow, along with other parody accounts, in an effort to both silence critics and promote a conspiracy theory about “shadow banning” of conservative accounts on Twitter.

Apr 19, 2019 — Nunes instructs Fox viewers to avoid confusion by not reading the actual Mueller report, and sticking to the “summary” provided by Bill Barr.

Oct 29, 2019 — Nunes and other Republicans plant lies about the whistleblower into transcripts of House impeachment inquiry investigations, in the hopes of ‘poisoning’ those transcripts.

Oct 30, 2019 — Officials reveal that Nunes’ staffer Kashyap Patel has been pretending to be the NSC expert on Ukraine and bringing unsourced data directly to Trump to reinforce conspiracy theories while shutting out information from actual expert Alexander Vindman.

Nunes is going back to the Ethics Committee — and no, they won’t be able to find any.