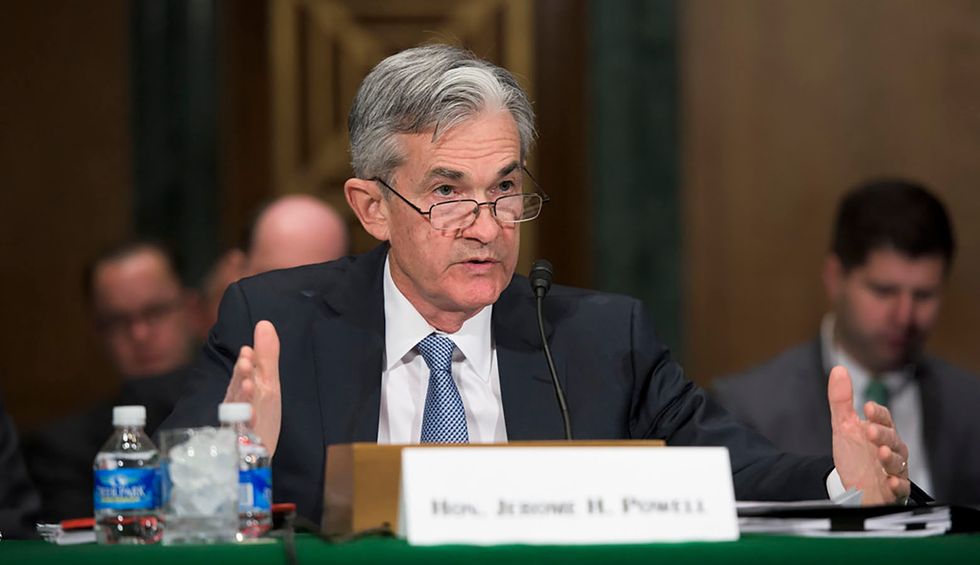 Governor Jerome H. Powell testifies before a joint hearing of the Senate Banking Subcommittee on Securities, Insurance, and Investments and the Subcommittee on Economic Policy in Washington, D.C., on April 14, 2016.
The Conversation
November 01, 2019Economy

The U.S. Federal Reserve is stuck between an apparently booming economy and a financial crisis that might be right around the corner.

That’s why its decision to cut interest rates by another quarter point on Oct. 30 – its third reduction in as many months – seems so odd. Lowering rates when the economy is as strong as the numbers make it out to be is practically unheard of. And, according to textbook economics, lowering interest rates during a boom is a sure recipe for disaster.

The trouble is, as someone who studies financial booms and busts, I know that not lowering rates may be even worse. That’s because the corporate sector is dangerously over-indebted, creating a financial bubble.

A hike in borrowing costs could kick-start a cascade of bankruptcies in a financial contagion that would derail the U.S. economy.

Troubles below the surface

On the surface, the U.S. economy appears to be humming along just fine.

Unemployment’s at a half-century low. Inflation is near its target of 2%. And, at about 125 months, the U.S. is charting its longest economic expansion since at least the 1850s.

Look under the hood, however, and things look very troublesome.

Numerous trade wars have cost U.S. companies, farmers and consumers dearly. The manufacturing industry – once America’s job engine and ostensibly the sector the trade war was supposed to support – is seeing its worst year since 2009.

And looking abroad, the situation is even worse, with the global economy slowing and the International Monetary Fund warning there’s little ammunition left to fight a recession.

While that’s bad, we haven’t gotten to the scary part yet.

A key cause of the 2008 financial crisis was too much debt in the housing market, much of which ultimately went bad.

Today, the problem is in corporate America. Since 2008, when the Fed drove its target interest rate to a record-low 0.25%, markets have been flooded with cheap money. That was too much to resist for U.S. companies, which went on a borrowing binge.

All American companies are currently sitting on a record US$15.5 trillion in debt, equivalent to about two-thirds of U.S. GDP. Unfortunately, this debt was not primarily used to finance expansion and growth but more commonly to jack up stock prices through dividends, stock buybacks and acquisitions.

The problem will come when the party stops – when interest rates begin rising and companies, particular the ones that took more risks, can’t refinance or pay back their debts. This is what turns a credit boom into a financial crisis, as happened in 2008.

The IMF estimates that half of corporate debt – excluding small businesses – is high risk, or junk rated, which has a much higher chance of default than investment grade debt.

What makes the situation even worse is that $660 billion of companies’ so-called leveraged debt is held in collateralized loan obligations that have been sold to a variety of investors and financial institutions. While this has helped keep rates even lower, a rise in delinquencies and defaults would cause losses in this market as well and a stampede of selling by investors.

As this cycle spirals, it spurs rising unemployment, a drop in consumer spending, more bankruptcies and – if it’s not stopped – an economic recession. This is what happened in 2008 when subprime borrowers couldn’t pay back their mortgages in large numbers.

In other words, in this environment of high – and in some pockets highly risky – corporate debt and faltering profits, the slightest interest rate move in the wrong direction has the potential to transform debt into junk worth pennies on the dollar.

This is why the Fed has no choice but to keep lowering interest rates and keep them there. The gamble is that companies will use the breathing space to get their houses in order.

If they don’t, we could be in for a world of pain.