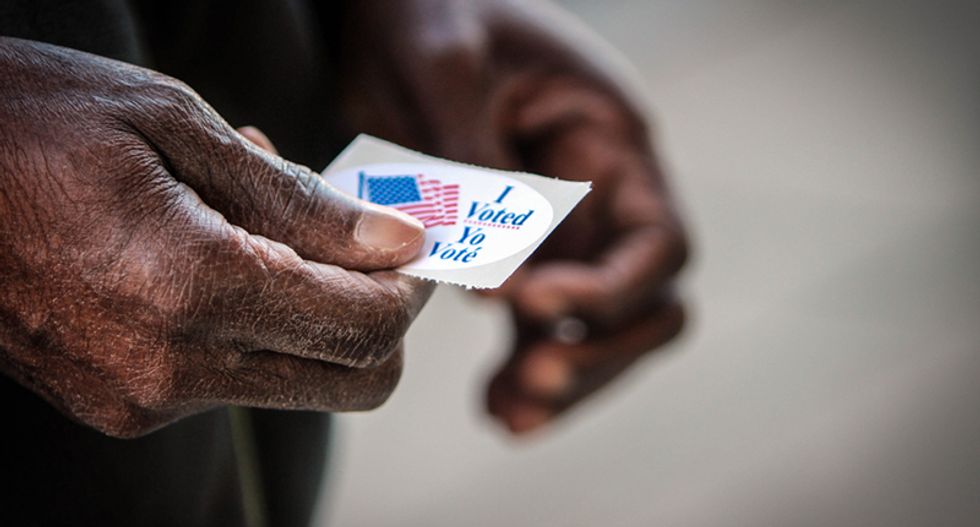 An elderly African American man holds his “I voted” sticker after he cast his ballot in Washington, DC.
Filter
November 07, 2019News & Politics

November 5 saw a raft of important county-level prosector elections around the country, and most of the results are now in. These days, district attorney elections are viewed by criminal justice and drug policy reformers as major catalysts for change. But half a decade since this movement gathered mainstream momentum, the dynamics are shifting.

DA races are no longer getting the same level of star treatment. That could be due to many factors, ranging from heated disputes over digital organizing behemoth Shaun King’s fundraising ethics, to the failure of progressive candidates in California’s 2018 races, to a growing contingent of prison abolitionists objecting to them as a vehicle of change. But reformers are still winning some races like they never could before.

Massive independent expenditure funding from reform philanthropists like George Soros and others, however, is now less determinative of reformer victories. In 2016, former Orlando State Attorney Jeff Ashton declared that “The voters decided today that the price of the State Attorney’s seat is $1.4 million in lies,” when they selected Aramis Ayala instead of Ashton, after a barrage of Soros-purchased attack ads. But by 2018, Soros, together with outside national interests like Real Justice PAC, spent several million dollars on reform DA candidates in California who didn’t make it.

The emerging 2019 general election results are a mixed bag for people hoping to see the end of mass incarceration and the War on Drugs in their lifetimes.

In Virginia, victorious reform candidates in several counties are set to establish an unprecedented powerbase. But in San Francisco, the political machine and a Ranked Choice Voting system seem to have cut the most radical reform candidate since Tiffany Cabán off at the knees. In Pennsylvania, Pittsburgh re-elected a top prosecutor with a 1990s-style “tough on crime” mentality, but Delaware County elected a reformer. And in Rochester, New York, despite Soros’s intervention, voters re-elected an anti-reform prosecutor who has been dogged by misconduct issues.

Virginia saw by far the most substantial wins for criminal justice reform candidates. With the northern Virginia victories of Steve Descano in Fairfax County, Parisa Dehghani-Tafti in Arlington, Buta Biberaj in Loudoun County, and Amy Ashworth in Prince William County—all candidates who explicitly campaigned in line with reform DAs like Philadelphia’s Larry Krasner—the justice system in this southern state might never look the same again.

There was also a victory for pro-reform Commonwealth’s Attorney candidate Jim Hingeley in Albemarle County. To set against that came incumbent Scott Miles’ defeat in Chesterfield County. Miles, a stand-out supporter of criminal justice reform, had previously eked out a win in this conservative district.

But counting up the pro-reform victors in Virginia makes five new explicitly anti-mass incarceration top prosecutors, four of whom now represent some of the state’s most populous counties.

Portsmouth Commonwealth’s Attorney Stephanie Morales, another reformer, retained her seat in 2017, so there are now six reforming top prosecutors who are primed to provide a hefty counterweight to the regressive, draconian drug policy agenda of the Virginia Commonwealth’s Attorneys Association in the state legislature.

Such a schism has never existed previously, which means eyes from across the political spectrum will be closely watching further developments in the Old Dominion State.

This race was the most closely watched DA contest in the country. In a tough test of the electoral strategy for reform, frontrunners Suzy Loftus, a relatively conservative continuity candidate, and Chesa Boudin, an insurgent radical reformer, faced off in a Ranked Choice Voting (RCV) contest.

At publication time, the final count had not been reached. Loftus—who received a huge boon from police union attack ads pillorying Boudin—led by a measly 240 votes. Yet RCV means that until the top two candidates enter an “instant runoff,” voters whose candidates are knocked off by process of elimination see their second-choice votes transferred to that remaining candidate, until one of the top two gets over 50 percent.

Trailing candidates Nancy Tung and Leif Dautch are both, like Loftus, conservative Democrats. So it is almost a given that Loftus will receive the vast majority of their voters’ second choice votes and clinch victory.

This may act as a warning shot to reform-oriented policy wonks across the country, who are trying to bring RCV to their cities as a way to make elections more civil and collaborative.

Doorley is the president-elect of the retrograde District Attorneys Association of the State of New York. She actively opposes even the most incremental criminal justice reforms, and has faced repeated prosecutorial misconduct issues in her office. Mitchell, a Black woman who ran as a progressive, also received support from Real Justice PAC and the Working Families Party.

Elsewhere, in Queens, the tumultuous race to determine the permanent successor to longtime DA Richard Brown is finally over. Melinda Katz, the establishment candidate who defeated the insurgent reform candidate Tiffany Cabán in the Democratic primary, handily won over Joe Murray, a former police officer who ran as a Republican in the general election.

Pennsylvania saw several key DA races this year, including in Delaware County, one of the suburban counties that form a ring around Philadelphia, and Allegheny County, which includes Pittsburgh.

The Delaware County race was featured by NowThis, a media company with millions of Facebook fans, after interim District Attorney Kat Copeland claimed that law enforcement in her county do not make racially-biased decisions. Jack Stollsteimer, who was recently interviewed by Filter, defeated Copeland in the general election by nearly 5,000 votes. Voters were apparently unswayed by attempts to too closely tie him to Soros, who spent $100,000 in independent expenditure money in Stollsteimer’s favor.*

Lisa Middleman, a progressive public defender running on the Independent ticket, was not so lucky against Pittsburgh’s drug warrior DA, Steve A. Zappala, Jr., a conservative Democrat. Zappala won by nearly 12 percentage points. That was despite media sources highlighting significant racial bias concerns with Zappala’s prosecutions of kids in adult court.

* The author worked on Jack Stollsteimer’s campaign for Delaware County DA in 2019.