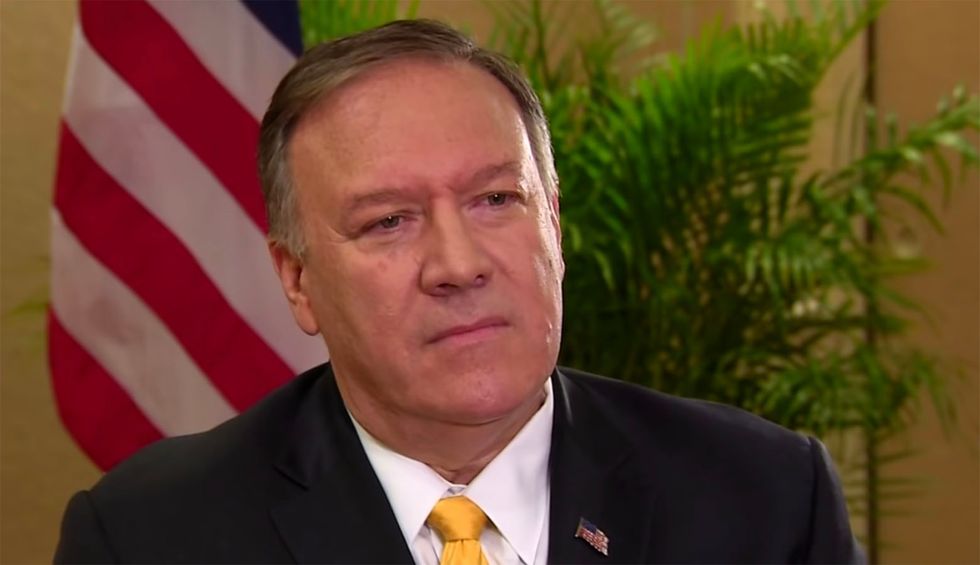 Morale has plummeted in the State Department under Mike Pompeo, but it has been sinking since President Donald Trump’s inauguration.

Trump’s secretary of state is facing an all-out revolt in the federal agency he oversees, as confidence in his leadership plummets and career officials accuse him of letting the president corrupt the department and U.S. foreign policy, reported the New York Times.

“In my view, and I say this with a great deal of reluctance as Secretary Pompeo tried at the start of his tenure to lift up the career service, he has failed the men and women of the department in his most important responsibility — to support them in the deepest crisis the service has faced in memory,” said Nicholas Burns, the State Department’s top career official under President George W. Bush and currently a campaign adviser to Joe Biden.

Many diplomats say Pompeo has done even more damage to the State Department than Rex Tillerson, an aloof oil executive who oversaw what some career officials saw as the purposeful destruction of the agency.

“They really want to blow this place up,” said one mid-level State Department officer in March 2017. “I don’t think this administration thinks the State Department needs to exist. They think Jared [Kushner, Trump’s son-in-law] can do everything. It’s reminiscent of the developing countries where I’ve served. The family rules everything, and the Ministry of Foreign Affairs knows nothing.”

“I worry about a know-nothing approach to foreign policy,” said Daniel Baer, former U.S. ambassador to the Organization of Security and Cooperation in Europe. “The whole thing can’t be done by shooting from the hip. There is a responsibility you have to the citizens you are governing to make an effort to have the information on which decisions are made.

About 12 percent of the department’s foreign affairs specialists in the first eight months of the administration, and State’s civilian workforce shrunk by about 6 percent, and one veteran diplomat blamed Tillerson’s “contempt” for career employees.

“You’re throwing out the people at the top, so you’re losing expertise,” said Ron Neumann, a retired 37-year State Department veteran who served as ambassador to Afghanistan, Algeria and Bahrain. “If you don’t bring in people at the bottom . . . you’re setting up a long-term problem.”

In the early days of Tillerson’s leadership, when staffers felt that all of their duties had been turned over to the president’s inexperienced son-in-law, employees complained that their duties had dwindled to almost nothing, leaving them with little to do but wander the streets of the historic Foggy Bottom neighborhood and take long lunches.

“I used to love my job,” said one staffer in March 2017. “Now, it feels like coming to the hospital to take care of a terminally ill family member. You come in every day, you bring flowers, you brush their hair, paint their nails, even though you know there’s no point. But you do it out of love.”

Tillerson was pushed out in March 2018 after calling the president a “f*cking moron,” but officials complained that he never bothered filling diplomatic posts in key nations — including France, Germany, Saudi Arabia and South Korea.

“Secretary Tillerson’s term has led to widespread demoralization in the foreign service, the dismissal or resignation of people with expertise that individually may not be irreplaceable but as a cohort certainly becomes so,” said Paul Musgrave, a foreign policy expert at the University of Massachusetts Amherst. “That hinders the State Department’s ability to enhance U.S. interests through diplomacy.”

Other evidence has emerged that Trump was more interested in advancing his own interests through a hollowed-out State Department than in projecting long-term U.S. interests.

A report from the State Department’s Office of the Inspector General released in August 2019, as the key events that led to the House impeachment inquiry began unfolding in public, found that Trump appointees harassed and retaliated against employees deemed insufficiently loyal to the president.

The report found that Assistant Secretary of State Kevin Moley and former senior adviser Mari Stull were openly hostile to career employees who had served under President Barack Obama, calling them “traitors,” and singling out officials for their perceived political views.

“Descriptions for all future vacancies should ‘reflect President Trump’s agenda,'” Stull said, according to the report, and “‘require conformance to the President’s beliefs.’”

The report covers events from June 2018 into that fall, but a year later, morale has somehow sunk even lower.

Two former high-ranking State Department officials — Marie Yovanovitch, who was forced out as ambassador to Ukraine, and Michael McKinley, a former senior adviser to Secretary of State Mike Pompeo — each told the House impeachment inquiry about the president’s actions toward Ukraine and threats they faced from the White House.

Yovanovitch testified that she was afraid for her own safety and chased out of her job due to the president’s political interests, and McKinley resigned last month over Pompeo’s lack of support and his concerns about the secretary’s corruption.

“Morale at the State Department is rock bottom, but spirits have been lifted by the courage of these patriots,” said Wendy Sherman, the department’s third-ranking official under Obama.