Paul Krugman explains why the GOP can't drop Trump: They think Democrats have 'no legitimate right to govern' 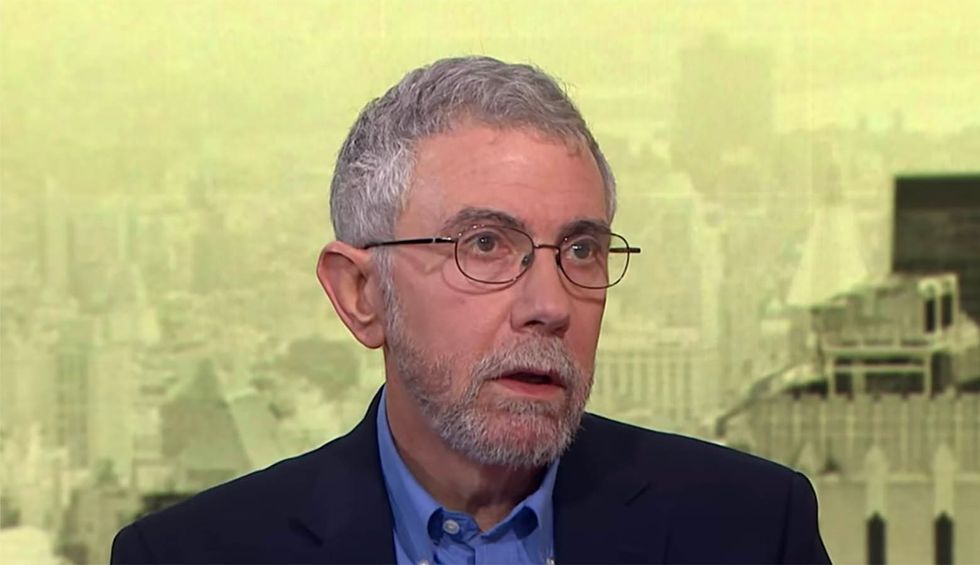 When President Richard Nixon resigned in August 1974, some decidedly right-wing Republicans — Sen. Barry Goldwater of Arizona, for example — had turned against him because of Watergate. President Donald Trump, by contrast, is likely to be acquitted by a GOP-controlled U.S. Senate if he is indicted by the House on articles of impeachment. Liberal economist and New York Times columnist Paul Krugman is troubled by the fact that Trump still enjoys unwavering support from so many Republicans in Congress despite the Ukraine scandal, stressing in a new column that it underscores the corruption of not only Trump, but the modern GOP in general.

Reflecting on all the damning testimony presented this month during the House’s impeachment inquiry, Krugman writes, “In a different era, when both parties believed in the Constitution, Trump’s abuse of his position for personal gain would have led to his removal from office long ago….. The inquiry hasn’t found a smoking gun; it has found what amounts to a smoking battery of artillery. Yet almost no partisan Republicans have turned on Trump and his high-crimes-and-misdemeanors collaborators. Why not?”

Krugman goes on to explain why not: most modern-day Republicans, as Krugman sees it, will justify Trump’s actions because their disdain for Democrats runs so deep.

“I don’t think most observers realize, even now, the extent to which many Republicans view their domestic opponents not as fellow citizens, but as enemies with no legitimate right to govern,” Krugman asserts.

Trump, Krugman emphasizes, is not an anomaly within the Republican Party — he reflects the party in general.

“The GOP is now a thoroughly corrupt party,” Krugman declares. “Trump is a symptom, not the disease — and our democracy will remain under dire threat even if and when he’s gone.”

Krugman notes that one thing that keeps Republicans afraid to criticize Trump are financial incentives: even if they get voted out of office, they will find lucrative job opportunities on the right.

“The modern U.S. right contains many institutions — Fox News and other media, right-wing think tanks, and others — that offer sinecures to former officials,” Krugman observes. “However, this ‘wing-nut welfare’ — which has no counterpart on the left — is available only to those who continue to toe the line.”

Krugman, however, acknowledges that some conservatives still have the guts to publicly reject Trumpism.

“So, are all Republicans corruptly subservient to Trump?” Krugman asks. “No, there are some honorable Never Trumpers, including many of the foreign-policy neocons like William Kristol. Some of us will never forgive this group for misleading us into war, but it turns out that they really do have principles — and deserve recognition for their current political courage.”

Although Krugman makes it clear that he doesn’t believe all conservatives are corrupt and unscrupulous, he concludes his column on a troubling note and asserts that the modern GOP is probably beyond redemption.

“Even catastrophic electoral defeat next year probably wouldn’t do much to change Republican behavior,” Krugman warns. “The big question is whether America as we know it can long endure when one of its two major parties has effectively rejected the principles on which our nation was built.”