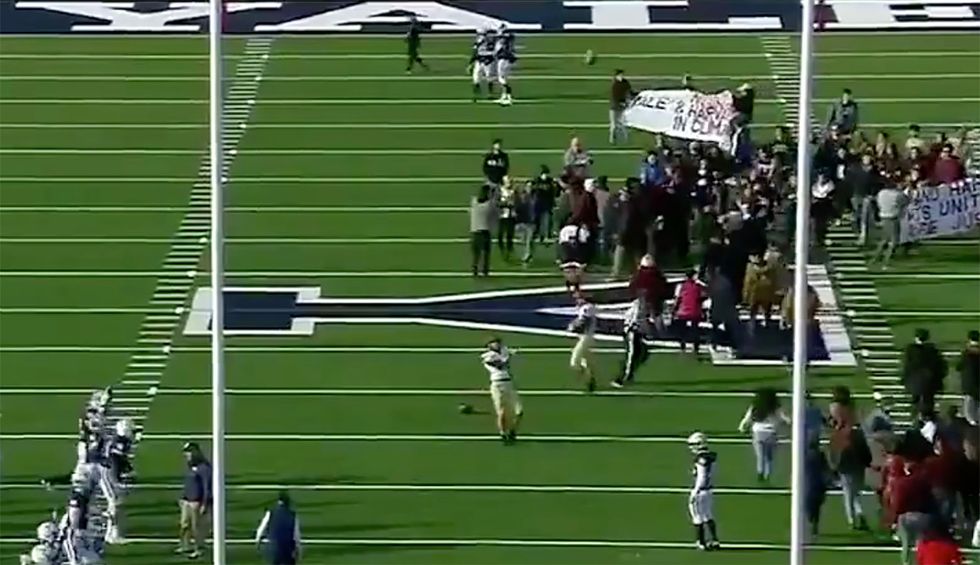 During the Harvard-Yale football game on Saturday, Nov. 23, up to 500 students, alumni, and spectators participated in a climate change protest during halftime, as reported by NBC News.

Initially, a group of fewer than one hundred protesters, including members of Divest Harvard and Yale Endowment Justice Coalition, took to the field with signs, banners, and chants, calling on the two Ivy League schools to both divest from fossil fuel companies and forgive Puerto Rico’s debts, but others soon joined from the audience. Ultimately, the protesters delayed the game for over 30 minutes, though the game was not canceled. In total, 42 people were issued misdemeanor summonses on disorderly conduct charges.

As Nora Heaphy, an organizer and student at Yale University told BuzzFeed News, participants knew getting arrested was a risk. "The game is a focal point for press and alumni who may not know the university is invested in the climate crisis," Heaphy told BuzzFeed in an interview. "It's a huge opportunity to spread our message." She stressed that their intention was not to cancel the game, but to raise awareness. The game is traditionally well-attended by both current students and faculty as well as alumni. It also airs on television.

Not everyone in the audience appreciated the protest, however.

“They’re all supposed to be intelligent people. It looks like there’s a lot of common sense that has missed their generation,” 68-year-old Chuck Crummie told The Washington Post in reference to the protesters. “It goes to show that this generation is all about themselves and not a football game.”

How did the football players feel? As reported by the Post, players from both teams wore orange wristbands on game day to support the protest. The Captian of Harvard’s team, Wesley Osgbury, expressed support for the protest in the following video.

"It is regrettable that the orchestrated protest came during a time when fellow students were participating in a collegiate career-defining contest and an annual tradition when thousands gather from around the world to enjoy and celebrate the storied traditions of both football programs and universities. The exercise of free expression on campus is subject to general conditions, and we do not allow disruption of university events,” the school said in a statement.

Rachael Dane, a spokesperson for Harvard, issued a statement via email which notably did not address police or the protest.

“Universities like Harvard have a crucial role to play in tackling climate change and Harvard is fully committed to leadership in this area through research, education, community engagement, dramatically reducing its own carbon footprint, and using our campus as a test bed for piloting and proving solutions,” the statement reads, as reported by the Harvard Crimson.

Protesters handed out a pamphlet outlining their goals and intentions. As obtained by Hearst Connecticut Media and reported by the New Haven Register, a selection from the pamphlet reads: “When Harvard and Yale invest in companies that destroy our planet, and its people, they are complicit in the climate crisis - nobody wins. Inaction is no longer an option.“

The pamphlet goes on to urge the schools to “Disclose how much of their $71 billion in endowments is invested in the fossil fuel industry and Puerto Rican debt,” “Divest from fossil fuel companies and cancel holdings in Puerto Rican Debt,” and “Reinvest in environmentally sustainable and socially responsible initiatives.”

For the curious, Yale has partially divested from fossil fuel companies. According to a climate action plan at Harvard, the university hopes to be free of fossil-fuels by 2050. Compared to other major schools, like the University of California system, who have already ended its investments with fossil fuel companies, Yale and Harvard (and many other higher education institutions) lag considerably behind.

The Post reports that among other chants, some student protesters included the now-viral phrase, ‘OK boomer.’

2020 Democrats tweeted in favor of the protest:

From the March for Our Lives, to worldwide Climate Strikes, students and young people are leading the charge to pro… https://t.co/OxBI7EdVmE
— Julián Castro (@Julián Castro) 1574545954.0

When people come together to stand up for justice, we win. Congratulations to the young people demanding a sustaina… https://t.co/f3N2Ol4n9S
— Bernie Sanders (@Bernie Sanders) 1574548222.0

I support the students, organizers, and activists demanding accountability on climate action and more at… https://t.co/PcrBqUAJSS
— Elizabeth Warren (@Elizabeth Warren) 1574557824.0

As did Rep. Alexandria Ocasio-Cortez:

Check out local coverage of the protest, including an interview with protesters:

If you’re on the fence about supporting a progressive cause but not its tactics, make sure to check out our Making Progress interview with Black Lives Matter co-founder Alicia Garza who spoke to exactly that concept.