'Is it exhausting to lie all the time?': Trump defender mocked for claiming Afghanistan trip had 'no photo ops' — after posting video of photo ops 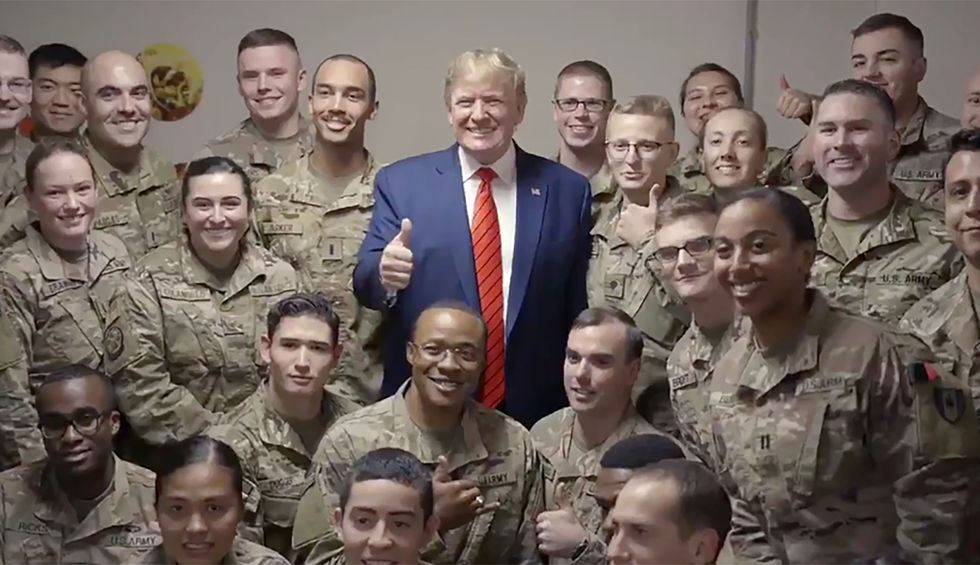 Turning Point USA founder Charlie Kirk, a far right wing BFF to Donald Trump, Jr. and vehement supporter of President Donald Trump is getting roundly mocked after posting a tweet insisting the Commander-in-Chief’s trip to Afghanistan had “No press” and “No photo ops” – despite including a video that literally showed photo ops.

“Incredible,” Kirk tweeted. “President Trump made an unannounced trip to Afghanistan to visit our troops No press No photo ops Just there to support our brave men and women in uniform I’m thankful for our troops today and I’m thankful for a president who is too.”

Like many of Kirk’s tweets supporting Trump, it was untrue. And as for “unannounced,” all high-level trips to combat zones or other theaters of war are always unannounced for security reasons.

As some on social media noted, about 14 seconds into the video Kirk posted, one of the officers accompanying Trump shouts, “Alright who wants some photos?”

Kirk’s TPUSA, plagued by allegations of racism and anti-Semitism (and a defense of Hitler) is financially supported by far right billionaires like Foster Friess, and by right wing extremists like Ginni Thomas (married to Supreme Court Justice Clarence Thomas).

Even though it supposedly – according to Kirk – wasn’t a photo op, President Trump quickly posted video of him with the troops:

And on Friday Trump posted photos of his trip:

Many on Twitter were quick to mock Kirk, who has a reputation for spreading falsehoods that favor Trump.

The press was there and you can literally see camera flashes going off in this video (in which Trump poses for a ph… https://t.co/MKpvOqY6YX
— John Haltiwanger (@John Haltiwanger)1575042202.0

Incredible. Here people is an example of disinformation. A lie to over 1-million followers. “No press No photo ops”. https://t.co/kmZDP6wjLG
— Doug Meehan (@Doug Meehan)1575030924.0

You must be a complete fucking idiot! No photo ops? You attached a video of the visit you fucking schmuck. https://t.co/uTb2ZBKH8F
— Steve Kerzner (@Steve Kerzner)1575032986.0