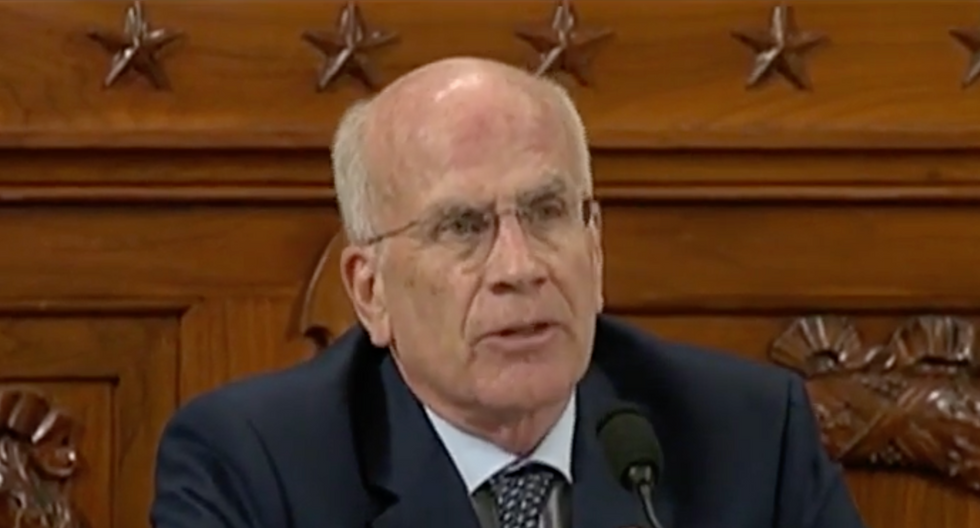 Republicans at today’s impeachment hearing, featuring the testimony of George Kent, the State Department’s deputy assistant secretary for European and Eurasian Affairs, and Bill Taylor, the senior U.S. envoy to Ukraine, have unveiled a plethora of odd defenses of Donald Trump. They range from “I'M YELLING SO YOU KNOW I’M SERIOUS” to slipping in unsupported conspiracy theories, and most importantly, calling the testimony of these two professional career diplomats nothing more than “hearsay.” Over and over again, we’ve heard them object to these two witnesses because they did not have direct conversations with Trump.

Rep. Peter Welch had quite enough of that nonsense, and as he took his turn at the microphone, he called their bluff, saying, “I say to my colleague, I would be glad to have the person who started it all come in and testify. President Trump is welcome to take a seat right there.”

It was an extraordinary moment that drew big laughter in the room.

While Rep. Welch’s first statement drew laughter, the rest of his statement seriously addressed Donald Trump’s gross abuse of power. His full comments are worth a listen (transcript below).

REP. PETER WELCH: The question is whether there was an abuse of that power. The president can fire an ambassador for any reason whatsoever. The president can change his policy as he did when he opened the door for Turkey to go in and invade, despite opposition from many of his senior advisers. A president could change his position on Ukraine. But is there a limit? There is. Because our Constitution says no one is above the law. And that limit is that one cannot, even as president, use the public trust of high office for personal gain. The law prohibits any one of us here on the dais from seeking foreign assistance in our campaigns. The question for us is whether the use of power by the president was for the benefit of advancing his political interest in the 2020 campaign. By the way, to my colleagues, if the president wants to attack Joe Biden and his son, he's free to do it. All fair and square in campaigns. He's not free to change our foreign policy unless he gets his way to a system in that campaign. That's the line he can't cross.