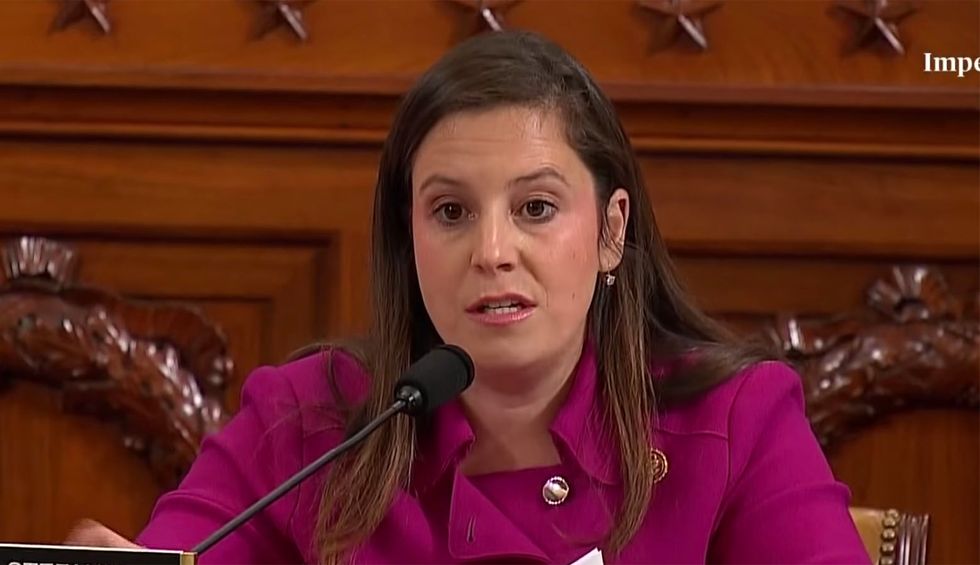 For those watching any of last week’s congressional impeachment hearings a few Republicans stood out, but one in particular tried to make a name for herself – and did, though not perhaps the way she had hoped. U.S. Rep. Elise Stefanik (photo), a Republican representing a large portion of upstate New York north of Albany, had a few tricks up her sleeve. It turns out her stunts didn’t impress her opponent’s supporters.

Tedra Cobb, a Democrat and former county legislator who is running to unseat Stefanik in just three days took in $1 million as a result of Rep. Stefanik’s antics, stunts, and false claims.

Hennessey is referring to a photo (below) of Stefanik with far right conspiracy theorist and anti-immigration “nationalist” Laura Loomer.

Loomer, who is running for Congress now, has been banned by most major social media platforms, reportedly for hate speech. She is a former James O’Keefe employee, and has been accused of “stoking racism” and having “ties with other far-right, anti-Muslim, and white nationalist activists.”

That didn’t stop Stefanik from posing for this photo with Loomer:

Stefanik accused House Intelligence Chairman Adam Schiff of breaking House rules when he stopped her from speaking – even though he was merely enforcing the long-established rules, rules that Republicans instituted years earlier.

Here she is falsely claiming Chairman Schiff was refusing to let her speak, “simply because we are Republicans.”

She didn’t stop there. Over the past few days she’s posted tweets with false claims like, “Since I’ve exposed Adam Schiff, radical liberals & never-Trumpers are launching disgusting attacks against me in an attempt to silence me.”

Stefanik’s tweets are angry and accusatory, like this where she’s clearly aligning herself with President Trump.

As you can see on Twitter, there is a rot in the Socialist Democratic Party. Adam Schiff and his radical liberal al… https://t.co/kXnJjTla9S
— Elise Stefanik (@Elise Stefanik)1573999103.0