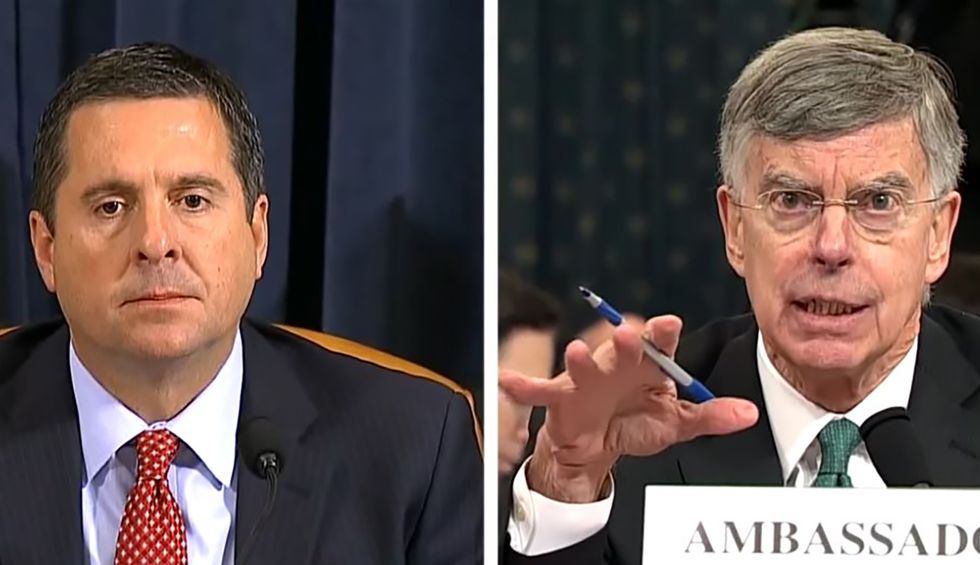 Nunes began with an opening statement which included a misleading claim that Democrats on the committee had tried to “obtain nude pictures of Trump from Russian pranksters who pretended to be Ukrainian officials,” when in fact Intel Chairman Rep. Adam Schiff, D-Calif., said he would refer the materials to the FBI.

Nunes went on to allege that the Ukraine whistleblower who reported Trump’s call to Ukrainian President Volodymyr Zelensky was “acknowledged to have a bias against President Trump” and falsely claimed that the whistleblower’s “attorney touted a ‘coup’ against the president,” when the attorney was actually referring to former acting Attorney General Sally Yates being fired for standing up to Trump in 2017.

Nunes then pushed conspiracy theories accusing Democrats of “colluding with Russia by funding and spreading the Steele dossier,” because it “relied on Russian sources.” He then claimed that Democrats “cooperated in Ukrainian election meddling,” referring to a Democratic National Committee contractor who tried to get information about former Trump campaign chief Paul Manafort’s work in Ukraine, which was under multiple investigations.

Nunes also falsely claimed that Trump’s July 25 phone call to Ukrainian President Volodymyr Zelensky was to express “concerns about foreign corruption,” even though Trump did not mention “corruption” once on the call. Nunes also falsely claimed that the “officials’ alarm at the president’s actions was typically based on second-hand, third-hand and even fourth-hand rumors and innuendo,” even though multiple witnesses testified about first-hand interactions with Trump and with others.

Nunes then claimed that Democrats were “undermining” the FBI, Justice Department and State Department, even though Nunes himself led a months-long assault on the FBI and DOJ while trying to defend Trump from the Russia investigation.

“It will take years, if not decades, to restore faith in these institutions,” Nunes said.

Nunes then claimed that acting Ukraine ambassador Bill Taylor and senior State Department official George Kent, both members of the Trump administration, had passed the “Democrats’ star chamber auditions held for the last weeks in the basement of the capitol.”

When it came time to ask witnesses questions, Nunes used his time to push conspiracy theories to try to defend Trump.

Nunes claimed that the summary of Trump’s call to Zelensky was “dramatically different from their nefarious depiction of it. What it actually shows is a pleasant exchange between two leaders who discussed mutual cooperation over a range of issues.”

Nunes then alleged that Trump “improved” aid to Ukraine, citing a false conspiracy theory that former President Obama only provided the Ukrainians with “blankets.” Because Ukraine ultimately received the aid that the Trump administration blocked after pressure from Republicans in Congress, Nunes claimed that the “crime . . . never actually occurred.”

Nunes went on to repeat his conspiracy theory that Ukraine “did meddle” in the 2016 U.S. election.

“If there actually were indications of Ukrainian election meddling, and if foreign election meddling is a dire threat, then President Trump would have a perfectly good reason for wanting to find out what happened,” he said. “He’d have good reason to send his personal attorney to make inquiries about it.”

Nunes’ performance at the hearing was panned by former government officials and the media.

“I think the President was not served well by Nunes’ opening. He’s like a bad high school football coach, running the same playbook because it worked last time,” tweeted former acting Solicitor General Neal Katyal. “But Ukraine is [different] than Mueller. The accusers are Trump’s own Executive Branch employees, and it goes to Trump’s use of his awesome powers as President, not as a campaign person in 2016.  That’s why Republicans have struggled so much to come up with a defense of Trump’s conduct.”

“It reminds me of a bad Supreme Court advocate, hiding all the flaws in a case by pretending they just don’t exist,” he added. “It lacks credibility. Everyone knows what he did was wrong, the question is simply if it is impeachable.”

“Looks like Nunes is going to focus entirely on a debunked conspiracy theory. Debunked by our own intelligence community,” she tweeted. “One Trump’s own administration officials have told me is nuts.”

CNN anchor Brian Stelter wrote that journalists recognize Nunes had simply pushed lies, but wondered if that would be reflected in media coverage of the hearing.

“Reporters know that Nunes is throwing B.S. against the wall, hoping to make it stick,” he tweeted. “Will their end-of-the-day news stories and segments reflect that?”