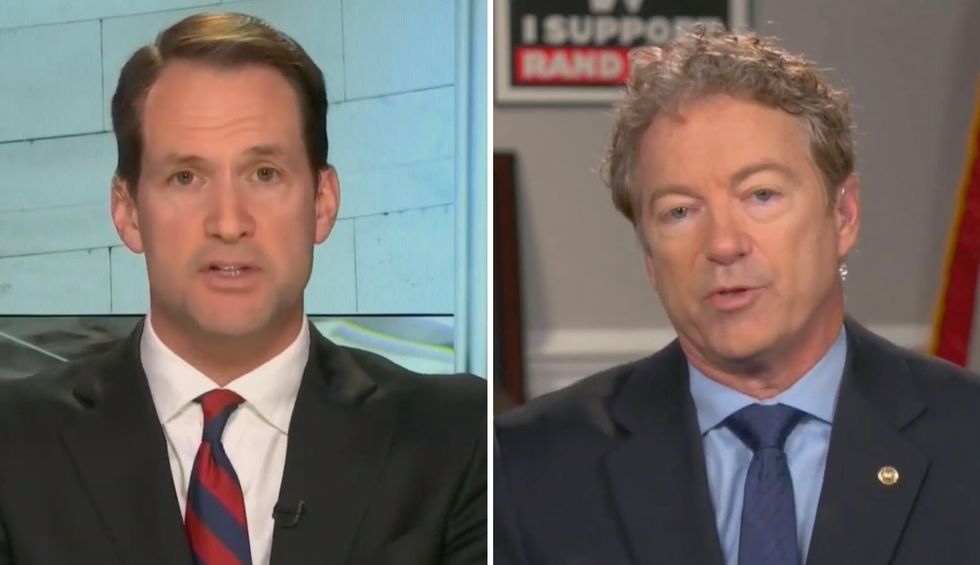 During a Sunday interview on Meet the Press, Paul deflected questions about Trump’s attempt to have Ukraine fabricate dirt on Joe Biden in exchange for military aid by turning the conversation to Hillary Clinton.

At one point, Todd wondered “two wrongs make a right,” suggesting that both Joe Biden and Trump had made errors in judgement when it comes to Ukraine.

“If you grant me one second here, my head is only now decombusting from the exchange with Rand Paul,” Himes explained.

“I spent 11 years in public service defending the press,” he continued. “When senator Rand Paul comes on and says what Donald Trump did — and the transcript is there — extorting a foreign government for his personal political gain and that’s exactly the same thing as Joe Biden, exactly the same thing as what he did Joe Biden saying this prosecutor should be released when Joe Biden is acting in consistency with American foreign policy.”

Himes then took a shot at Todd.

“When Rand Paul says that’s exactly the same thing as the president of the United States saying you need to find dirt on my political opponent,” the congressman said.

“With all due respect, Chuck, when you say do two wrongs make a right?” Himes added. “Let’s be very clear, the president of the United States demanding, extorting a vulnerable country to do his political bidding, to go after his political opponent has nothing to do with Joe Biden executing the policy or Hillary Clinton doing opposition research on her presidential opponent those are radically different things and what the president did is wrong and impeachable.”