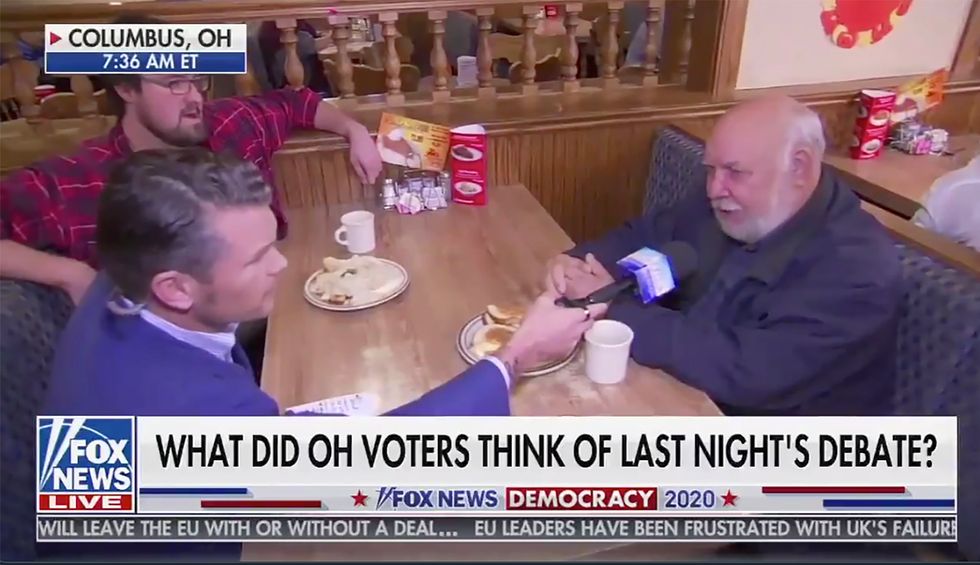 A “Fox & Friends” host got an unexpected lesson on wealth inequality from a retired man eating breakfast in an Ohio diner.

Pete Hegseth visited a diner Thursday in Columbus, where he encountered a few fans of Sen. Elizabeth Warren (D-MA) the morning after the latest Democratic presidential debate.

“I think she makes a lot of sense,” said Bill, a longtime Democrat sipping coffee in the diner. “You know, when she brought up that billionaires and taxing them after about $50 million, two cents of every dollar that they’ve made after, it’s nothing to them, and it would help so many people here.”

“I mean, we could build our infrastructure, the schools, colleges — we could do so (many things) with that,” Bill added. “Most people would think two cents of every dollar, what is that? A drop in the bucket? But it’s millions, billions of dollars. These 3 percent of the people that we have that own almost half of what we are worth in the United States is just deplorable.”

Hegseth asked whether he thought Warren’s tax plan would drive wealthy Americans out of the country, and Bill told the Fox News host that higher marginal tax rates had worked just fine when he was a younger man.

“It seems to me like, if I remember correctly, back in the 1960s and 1970s, that if you were a millionaire, your taxes were awfully high,” Bill said. “I think it was in that range 50, 60, 70 percent — nobody bitched about it then, still made lots of billionaires. I think once you get past a couple of million dollars, you got all the money you need. How about giving some of that to the people who worked for a living that can’t make it?”

Hegseth ended the interview by questioning whether that was a wise campaign strategy, and then turned to a server who was wrapping up an overnight shift and asked their thoughts on the debate.

“I really liked Elizabeth Warren, as well,” the server said.