University of Florida students protest Trump Jr. visit: ‘What has he really done except get handouts from his father?’ 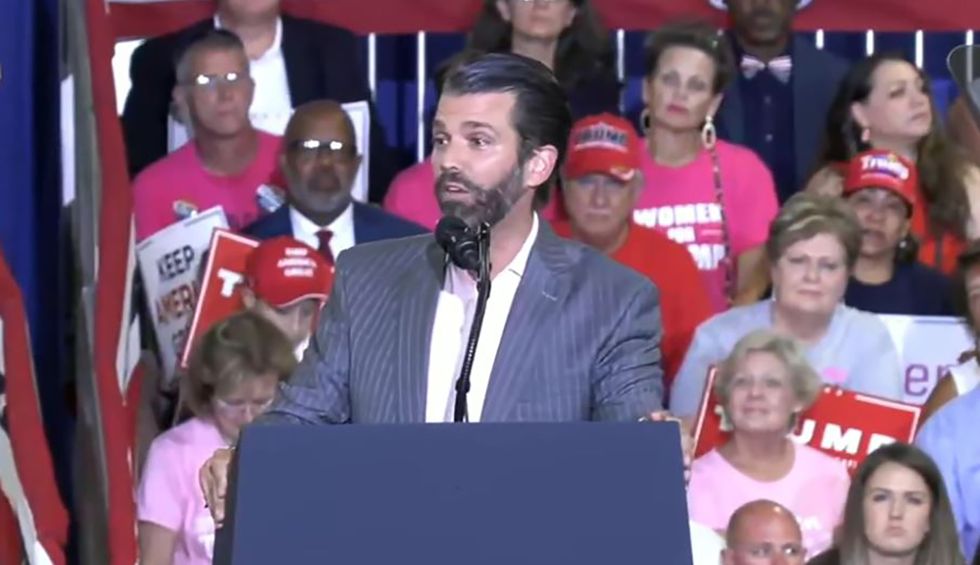 It was obvious how much a swing state Florida is when Democratic Tallahassee Mayor Andrew Gillum barely lost the 2018 gubernatorial race to Republican Gov. Ron DeSantis, and the deep political divisions in the Sunshine State were evident again at the University of Florida this week because of a visit by the president’s son, Donald Trump Jr.

On October 3, free tickets for an event at the campus’ University Auditorium featuring Trump Jr. and girlfriend Kimberly Guilfoyle (a senior adviser for Trump’s reelection campaign) became available, and Trump opponents launched a protest they dubbed  #CHOMPTRUMP. Trump Jr. and Guilfoyle were booked by ACCENT, which is part of the UF student government.

Evelyn Graham, one of the student protestors, is quoted by WUFT as saying, “ACCENT’s excuse is that Trump Jr. is going to be speaking about entrepreneurship when in reality, what has he really done except get handouts from his father?”

Laila Fakhoury, president of the UF chapter of Students for Justice in Palestine, asserted that it is unfair that the Trump Jr./Guilfoyle visit was funded by student fees when an April visit by Democratic Michigan Rep. Rashida Tlaib to the campus wasn’t.

WUFT quotes the 21-year-old Fakhoury as saying, “UF gave us no funding to host such a valuable event. UF didn’t spend money to secure us even though Rashida constantly has targets and threats surrounding her life.”

William Klein, another student protestor, told WUFT that he was not only protesting against Trump Jr.’s “hateful rhetoric,” but also, the fact that student fees were paying for his speech.

“For the university to hand Trump Jr. a $50,000 check while his father is running for reelection shows so many ethical concerns that really have nothing to do with free speech,” Klein told WUFT.