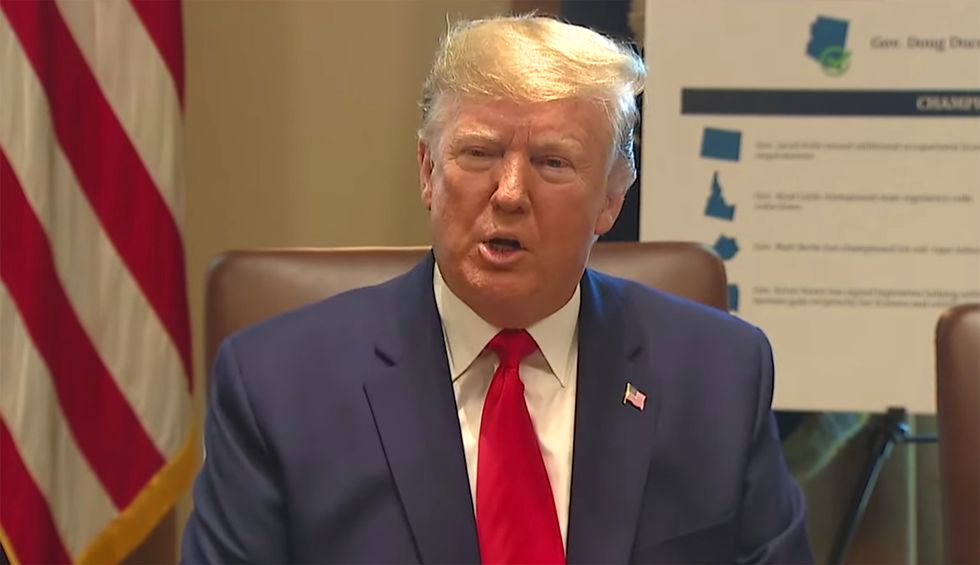 President Donald Trump went on a rampage during his Monday cabinet meeting in which he launched multiple broadsides against his political opponents.

The president’s latest public tirade came as he is facing increased pressure from House Democrats’ impeachment inquiry, as well as criticism from members of his own party over abandoning America’s Kurdish allies and trying to award his own business a massive government contract to host next year’s G7 summit.

Below are the craziest moments from Trump’s off-the-rails Cabinet meeting.

Even though the president wasn’t personally on the ground doing the tough work of fighting ISIS, he said that he nonetheless should be lauded for capturing members of the Islamist terrorist network.

2.) Trump bitterly complains about the Constitution’s emoluments clause that prevents him from receiving gifts from foreign governments.

The president was still upset about having to cancel plans to hold the G7 summit at the Trump National Doral Miami next year.

“It would have been the best G7 ever,” Trump claimed, before turning his anger toward reporters in the room.

“You people with this phony emoluments clause!” he said.

The United States Constitution’s emoluments clause states, “No Title of Nobility shall be granted by the United States: And no Person holding any Office of Profit or Trust under them, shall, without the Consent of the Congress, accept of any present, Emolument, Office, or Title, of any kind whatever, from any King, Prince, or foreign State.”

3.) Trump demands that investigations be launched into business deals that former President Barack Obama made after he left office.

Still seething about the criticism that he’s received for trying to bring the G7 to Doral, the president suggested that there was something corrupt about the deal that Obama made to produce movies with Netflix.

Of course, the issue is that Trump is promoting his own businesses to foreign leaders while in office, whereas Obama is now a private citizen.

Even though there is no evidence that Obama ever tried to directly negotiate with Kim, the president falsely claimed that his predecessor had tried calling the North Korean leader nearly a dozen times.

In his latest attack on the whistleblower who filed a complaint about him abusing his office to push the Ukrainian government to investigate former Vice President Joe Biden, Trump suggested that neither the whistleblower nor their informants deserved protection under the law.