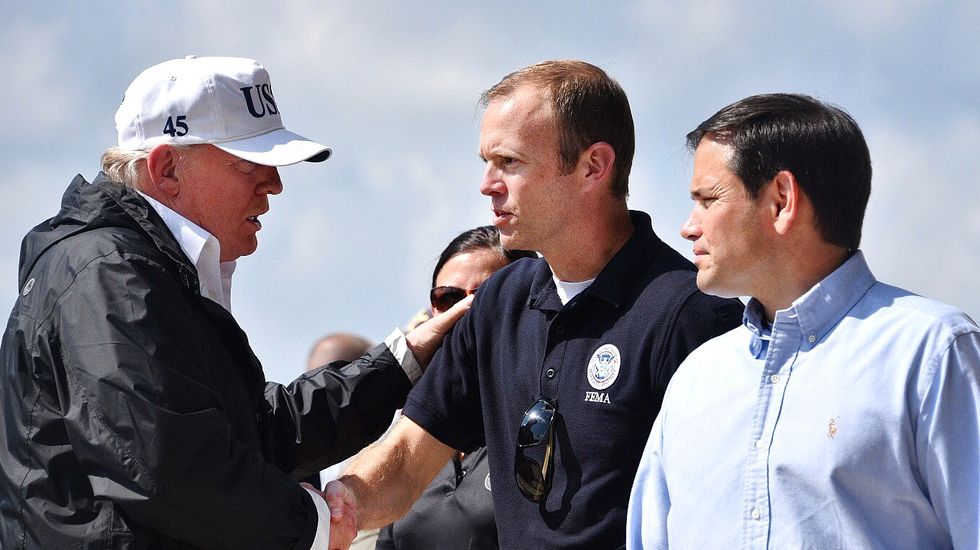 Sen. Marco Rubio was once one of Donald Trump's most formidable opponents; now, the Florida senator bends over backward to excuse the president's corruption.

In 2016, Rubio and Trump sparred frequently on the Republican primary debate stage. Trump picked the uninspired nickname "Little Marco" for the senator, which didn't seem to do much damage on its own, but Rubio never gained the momentum or strength that his backers hoped would prove to be strong enough to take down the reality TV candidate. As Rubio grew desperate, he launched one of his most memorable and pitiful attacks by stooping to his opponent's level, implying that Trump had a small penis. It was more of an embarrassing moment for Rubio than anyone else, though Trump helped himself with a crude rejoinder.

But Rubio did actually have some potent lines of attack against Trump. He called Trump an "erratic individual" and "someone who has spent a career sticking it to working people." He said he was "the most vulgar person to ever aspire to the presidency" and a "con artist." At one point, Rubio declared: "Donald Trump will never be the nominee of the party of Lincoln and Reagan."

Like most other Republicans, he abandoned those criticisms after Trump became president. But instead of just refraining from attacking Trump, the once-proud Rubio now even defends the president's blatant corruption — only to have the rug pulled out from under him.

Notably, in the midst of an impeachment inquiry sparked by Trump's hunt for dirt on his political opponents in Ukraine, the president exacerbated the situation by calling on China to investigate Joe Biden, as well. Asked about this, Rubio — a fierce China hawk — claimed Trump was joking and that the media had fallen for it. Rubio acted indignant about the fact that he had been asked to comment on Trump's remarks at all.

No one who watched Trump's comments who isn't predisposed to defend him seemed to think there was any indication the president was joking. And when Trump was later asked whether he had been joking, he made it clear he wasn't: "Frankly, as far as I’m concerned, if China wants to look into something, I think that’s great. And if they don’t want to, I think that’s great too. That’s up to China."

So even after Rubio offered him a defense, however implausible, for his behavior, Trump still insisted on undercutting the Florida senator. The message: Defend Trump at your own risk.

At the same time, Rubio also took to Twitter to express righteous indignation that Democratic presidential candidate Sen. Elizabeth Warren of Massachusetts made a light-hearted joke about people who are opposed to gay marriage. Apparently some "jokes" are worth commenting on!

But Rubio's most recent humiliation was even worse. After Trump announced that he would host the next G7 summit at his own Doral resort in Miami, Rubio shamelessly welcomed the most brazen example of presidential corruption to date:

Only a few days later, after a bipartisan backlash, Trump announced that he wouldn't host the G7 at his property, after all.

So now, even after Trump has abandoned the plan, Rubio is on the record saying he thinks it's "great" for a president to funnel government money into his own pockets through a clearly rigged selection process. Indeed, Rubio even openly admitted that he's fine with this corruption for "selfish" reasons.

It's hard to imagine a more thorough way for the credibility of a supposedly principled conservative to be completely subsumed by political cowardice.