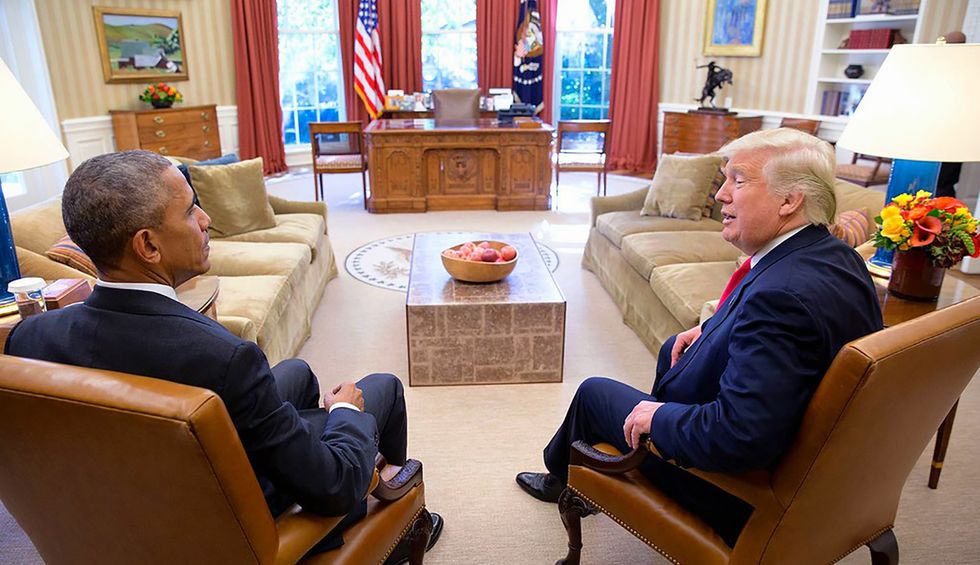 "Trump meets with Obama in the Oval Office" by US Department of State is licensed under CC PDM 1.0
Travis Gettys
and
Raw Story
October 28, 2019

President Donald Trump attacked his predecessor and confirmed that he was risking American lives for Middle Eastern oil.

The president delivered a rambling speech Monday morning to the International Association of Chiefs of Police conference in Chicago, where he basked in applause for the successful military raid that killed Islamic State leader Abū Bakr al-Baghdadi in Syria.

“And he didn’t die bravely, either, I will tell you that,” the president added. “He should have been killed years ago. Another president should have gotten him. But to me it was a very important — I would say all the time, they would walk into my office, sir, we called this leader at a low level. I said I never heard of him. I want al-Baghdadi. That’s the only one I know now. I want al-Baghdadi, get him. And they got him.”

Trump then defended his decision to withdraw U.S. troops from Syria, but promised to leave enough forces behind to secure the oil in the region.

“We met some great generals,” he said. “I learned a lot about generals. I met some good ones and I saw some bad ones. Some that didn’t have what it takes, and others that had more than anyone would have thought.”

The president claimed that ISIS had been 100 percent destroyed under his leadership.

“It was supposed to take a year, maybe two years,” Trump said. “I said to one of them how long will it take? ‘I think we can do it in one week, sir.’ He was a little more like you. But we have now tens of thousands of ISIS prisoners under tight supervision, and now we want the countries in the region to police their own borders. We don’t want to be a policeman in this case of two countries that haven’t gotten along for centuries.”