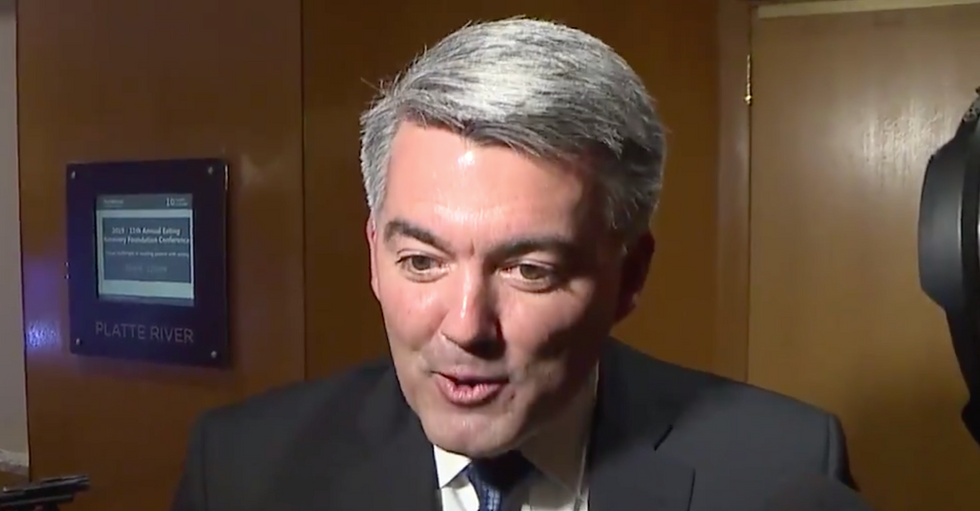 A few Republican senators had very bad weeks back home due to their absolute refusal to answer a very simple question: Is it okay for a president to ask a foreign leader to produce dirt on a political rival? Sens. Jim Risch of Idaho, Cory Gardner of Colorado, and Joni Ernst of Iowa all went to great lengths to avoid answering that hypothetical.

Risch made the top story on the evening news with his continued stonewalling of the state's largest newspaper, generally angering all of the Idaho press for his refusal to answer the question first posed by Boise Public Radio reporter Heath Druzin. "As the chairman of the Senate Foreign Relations Committee, do you think it's appropriate that the president asked?" Risch refused to answer and walked away, earning the condemnation of plenty of Idaho reporters who have long and difficult experience with the famously nasty and usually absent Risch. As Druzin shared with the KTVB TV reporter: "Since reporters here in Idaho don't get many opportunities for an in-person interview with the senator, he wanted to cover relevant topics."

Gardner isn't coming off any better in the local Colorado press for his performance this week after he "repeatedly declined to say Thursday whether President Donald Trump’s call with a Ukrainian president was appropriate, weeks after that call set off an impeachment inquiry in Congress."

The Canon City Daily Record noted that he "at times sound[ed] exasperated by the repeated questions about impeachment." It also noted that he "did not directly answer a question about whether he would accept foreign support in his closely watched 2020 Senate race." That doesn't seem like it would be a particularly difficult question for any senator to answer, but even that was too much for Gardner to commit to.

The Iowa Starting Line flipped the question for Ernst.

"Three separate times in the past week," the Starting Line's Pat Rynard writes, "Ernst has dodged and demurred on what should be an easy answer to a question central to the legitimacy of our democratic government. It seems she is too afraid of a nasty tweet from Trump in response to daring to disagree with the leader of her political party." So what if Russia interfered in her election? "Maybe when Ernst is thinking about herself, she'll finally get it. Because that sure seems to be the only thing she's good at these days."

It really is a simple question, one of the rare ones that's actually black or white in our system. There's another one they could be asked: Is it okay for the president to ignore Congress’ power of the purse and withhold funds they've appropriated to use as a tool to extort political help from a foreign country? That's a direct attack on congressional powers, after all. It's a question worth asking, but probably too much to expect Republicans to answer.