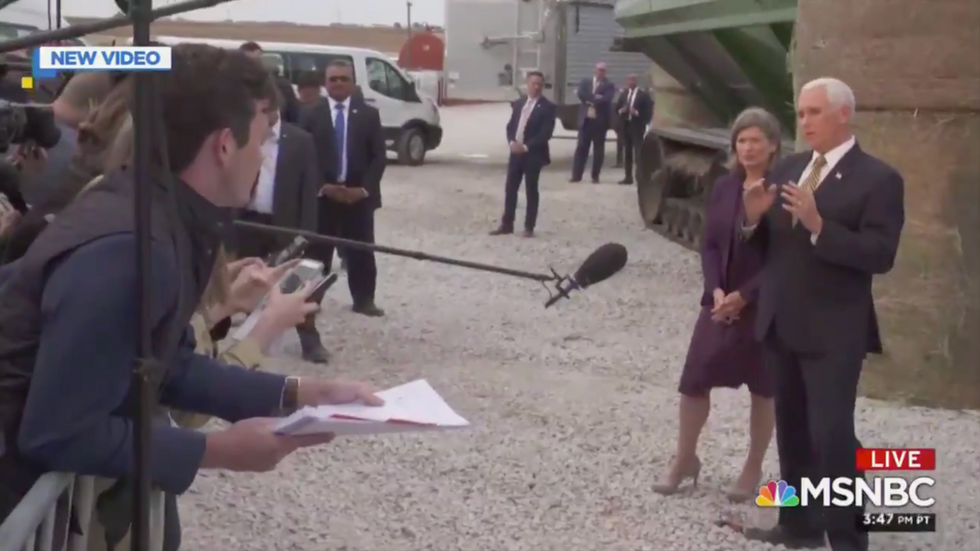 President Donald Trump's role at the center of the Ukraine scandal has rightly received the bulk of public scrutiny, but Vice President Mike Pence's involvement in the scheme has also raised alarms in recent days and weeks.

As I have argued, any significant focus on Pence may, ironically,  strengthen Trump's chances of surviving the scandal.

But Pence hardly served himself well while facing questions Wednesday about Trump's delay of military aid to Ukraine while the president was also trying to pressure the country to investigate former Vice President Joe Biden. NBC News reporter Vaugh Hilyard pressed the vice president Wednesday on what he knew — an especially pertinent question because Pence traveled to Ukraine in early September and brought up the issue of the aid before it had been released.

“I, uh, I never discussed the issue of, of, the issue of the Bidens with President Zelensky,” Pence said, seemingly caught off-guard. "Wh-what I can tell you is that all of our discussions internally, I mean, the president, and our team, and our contacts in my office in Ukraine, were focused on the broader issues of lack of European support and corruption —"

"But you were aware of interest in the Bidens being investigated?" Hilyard asked again. "And that being tied to aid to Ukraine being held up?"

Pence, once more, refused to answer the question directly.

"Well that's your question," Pence replied. "And I want to be very clear. The issue of aid and our efforts with regard to Ukraine were from my experience in no way connected to the very legitimate concern the American people have about corruption that took place, about things that happened in the 2016 election in Ukraine."

The qualifier "from my experience" here is crucial and gives him wiggle room so that his words can be interpreted quite broadly. But texts from State Department employees show there was palpable fear within the administration that Trump used the aid as part of a quid pro quo.