Lessons for a still-flooded Houston: In a city known for its antipathy to responsible planning, resilience is a never-ending game 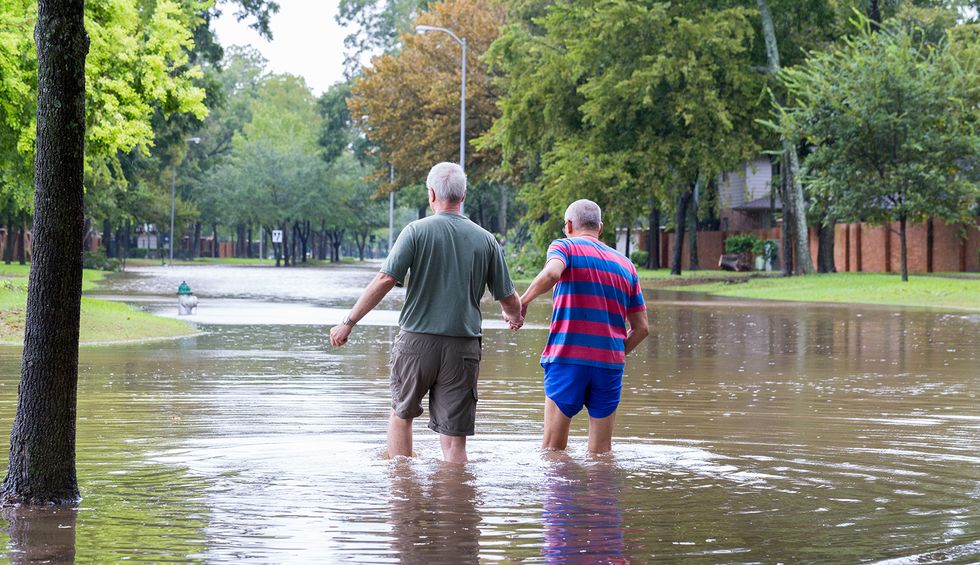 After Hurricane Harvey damaged or destroyed nearly 135,000 homes, killed eighty-eight people, and led to the deliberate flooding of west Houston as two main reservoirs threatened to fail, what did the city of Houston do? It did the least possible it could get away with, and then casually moved on with business as usual.

This article originally appeared on the Progressive.

As floodwaters from September’s Tropical Storm Imelda still drain from the streets of my hometown , I observe a discourse on Harvey’s two-year anniversary constrained by a presumed opposition between the needs of humanity and the forces of nature, as though the two were in mortal combat. In a city well-known for its antipathy to responsible planning, discussions of urban resilience and “making space” for water, as well as the benefits of green versus gray infrastructure, are just now bubbling to the surface, but remain well outside the scope of broad public awareness.

Houston, America’s “energy capital,” may find it more challenging than other cities to move beyond relying on the market to solve problems. But for all communities facing climate change-induced threats, the future lies in rethinking basic assumptions about how cities work, especially for those most vulnerable.

Harris County, which includes Houston, did manage in 2018 to pass a $2.5 billion flood control bond, a mere drop in the bucket toward the $30 billion estimated to be needed just to protect against a 100-year flood. For reference, Harvey was considered a 500-year flood—and it was Houston’s third in three years. The roughly 240 projects funded by the bond sound impressive, until one considers that most are microscopic improvements: widening and repairing existing channels, or upgrading detention ponds and retention sinks. Many agree they won’t prevent future flooding. Houston’s “flood czar,” developer Stephen Costello, had a staff of zero before Harvey, and was given a staff of one after the hurricane. Now the recovery czar, his main task so far appears to be maximizing compensation from FEMA.

arris County’s new judge (an executive position, despite its name), twenty-eight-year-old Colombian-born Lina Hidalgo, aspires to confront the problem by picking “low-hanging fruit,” such as warning and communication systems, but so far has not challenged the nexus of powers behind the city’s pell-mell development.

Even according to its own shrunken metrics of “recovery,” Houston is failing: FEMA has denied applications for aid from many African Americans in ruined neighborhoods like Kashmere Gardens and part of the Fifth Ward. These areas of Houston were devastated before Harvey, and remain so afterward: aging infrastructure, including overflowing open drains, are unchanged from the past. It’s easy to imagine that at its current pace any flood bond improvements would take a decade or more to reach residents in these areas.

On other fronts, the scene is just as desultory. Houston is having trouble buying out homes in the most obvious floodplains; only a few hundred have agreed to sell and relocate. Predictably, developers are vigorously contesting even minimal new requirements for housing elevation and building in the floodplains. Mayor Sylvester Turner advocates a hard coastal barrier (the “Ike Dike”) constructed off Galveston, a project more in the realm of fantasy than anything that might help vulnerable people in the next large hurricane. A third major reservoir, to supplement the two overwhelmed by Harvey, is unlikely to come to the rescue.

Instead, runaway climate change has been blamed for the intensity of the storm and the devastation in its wake, against which the mayor and city council—mere mortals—are presented as helpless. Attention has thus been successfully diverted from the man-made elements of the disaster to focus on the awesome power of fifteen trillion gallons of water and up to fifty inches of rain.

There have been no legal charges filed against any city officials for spurning any flood mitigation efforts commensurate with the rampant development going on for the last twenty years. And this is despite Tropical Storm Allison offering a preview in 2001 of what was to come. If anything, Harvey has been solicited to boost the city’s mythology of hardscrabble frontiersmanship and volunteerism operating under minimalist regulation.

There is yet to be an accounting of the fact that Houston recklessly paved over essential wetlands, and added magnitudes of impermeability at an unsustainable pace. Even in the recent years before Harvey, there were multiple 100-year and even 500-year floods, such as the Memorial Day flood of 2015 and the Tax Day flood of 2016, both of which personally affected me worse than did Harvey. These storms inundated large parts of the city including prosperous middle-class suburbs like Meyerland, Pearland, Friendswood, Kingwood, and Katy. And only a few weeks ago, Tropical Storm Imelda hit, flooding at least 1,700 homes in the area.

At the least, city officials—including recent mayors Annise Parker, Bill White, and Lee Brown—should be scrutinized for ignoring standard flood control measures, and their past deliberations over such measures should be made open and public, and subject to possible legal action. Anna Clark, in her brilliant new book, The Poisoned City: Flint’s Water and the American Urban Tragedy, has described the residents there filing legal charges, including for involuntary manslaughter, against officials who ignored conventional measures for protecting residents’ health. This should be a standard template residents everywhere should consider, when officials show such abysmal failure.

It is instructive to compare the media frame which encompassed the aftermath of Hurricane Katrina in New Orleans, where that city, in tune with its pathological national image, was described as beyond help, its mostly African American residents presented as looters, shysters, rapists, and even murderers delivered from their miserable lives by the hurricane’s timely intervention. It offered “slum clearance” for those who couldn’t wait to get their neoliberal tentacles into the city’s free-floating political economy.

In contrast, Houston sought to build its image, with full media cooperation, as a city of freelance heroes taking out their boats (or air mattresses) to rescue stranded neighbors, the spirit of voluntarism, rather than government intervention, its ultimate grace. Houston Texans star J.J. Watt, and Jim McIngvale (“Mattress Mack”), owner of celebrated Gallery Furniture, have been lauded as philanthropists assisting “recovery,” making self-obsessed pastor Joel Osteen’s initial reluctance to open up his Lakewood Church to displaced residents appear in quite bad taste.

So, what could have been done? Urban flood planning is a well-developed art, with an elaborate multi-dimensional perspective about preserving and enhancing wetlands and other sinks and barriers, encouraging permeable rather than impermeable surfaces, and the astute management of retention sinks and detention ponds, among other measures designed to minimize flooding. An impressive range of urban flood planning measures is practiced in countries from Mozambique to Bangladesh, not to mention in the Netherlands with its “room for the rivers” approach.

“Resilience” has become a favorite buzzword among many city and state officials, but the concept, as the discourse surrounding Harvey’s aftermath makes clear, is often deployed in narrow, adversarial terms, treating natural processes as enemies, the approach easily blending into the theory of resistance to nature it originally sought to replace.

Resilience tends to divide urban areas into wanted and unwanted zones: those unfortunate or poor enough to live within floodplains, or low-lying areas, somehow needing to be coaxed out of their voluntary servitude to nature’s barbarism when it decides to go full-on Biblical. Resilience presumes that the division between poor and rich must remain untouched, while it engineers levees, seawalls, and catchment basins, big infrastructure approaches that often only strengthen the existing structure of inequality.

It is a never-ending game, because resilience fights enemies that are evanescent and transmogrifying, only aided by our current urban development archetype. How can we even understand floodplains, involving the precise mapping of 100 or 500-year flood zones, when Houston flooded well outside these zones in all the recent floods? How can we understand vulnerability in New Orleans from a purely engineering standpoint, when the victims of that cataclysmic event were always barred from politics?

One indication of a different model is that followed in China’s Chengdu Urban Revitalization, which granted relocated residents new social and property rights after resettlement. Elements of the increasingly popular SUDS (sustainable urban drainage systems) are gaining traction in China and other parts of the world, and include such eminently practicable measures as rainwater harvesting and reconstructing wetlands, treating nature as an ally rather than an enemy. Flood planning, in this perspective, starts becoming part of a healthy reinterpretation of the city’s relationship with nature (including rooftop catchments and widespread urban gardening), rather than an abstracted confrontation.

The problem with current conceptions of resilience, and much of American planning, though, is that the city—or rather the particular economic interests it serves—still comes first, and nature is treated as secondary, if it is considered at all, never for its own sake. As long as this faulty paradigm reigns, so-called catastrophes will continue to be magnified in the context of no-zoning, no-planning, acutely segregated urban landscapes. Houston has not dared to imagine itself within its regional topography, including wetlands, prairie, forest, desert, and coast, and instead embraces growing magnitudes of asphalt.

Imagine, instead of a city imposed on a given topography, the natural elements of a place being granted equal footing. Urbanism would then work around what existed, rather than rooting it out and creating a perpetual, unwinnable war against nature. The most important consequence of this different way of imagining cities is that it would transform the whole psychology of subservience. The aftermath of a Katrina or a Harvey only too clearly reveals who is immune from disaster, and who really suffers from dislocation and displacement. Regardless of all the talk of resilience, if urban planning does not address segregation and inequality as part of its responses to flood control and disaster preparedness, the city remains a perpetual inequality machine. The city of the future, by embracing its natural surroundings and giving it its due, could become a playing field for equality.