In their battle against a broadening scandal, Republicans are just making sh*t up 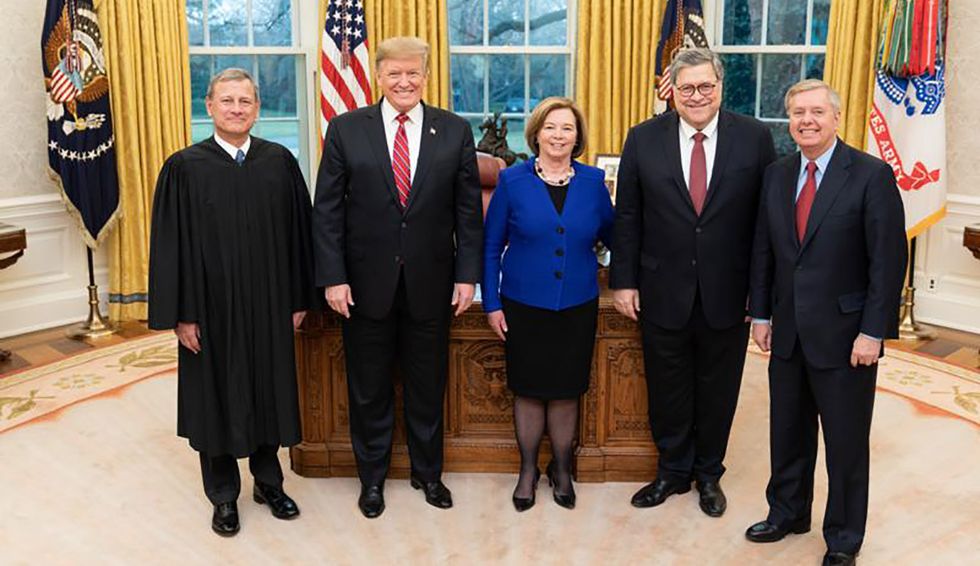 President Trump and his allies have trotted out a tired defensive strategy against mounting allegations that Trump entangled a foreign government — or perhaps several of them — in his personal and political destiny. It reeks of desperation.

Initially, Trump allies rejoiced that a non-verbatim recounting of a phone call between President Trump and Ukrainian President Volodymyr Zelensky lacked a clear display of quid pro quo — even though Trump asked for a "favor" from Zelensky while discussing the release of U.S. military aid to Ukraine. But now they are waging an all-out assault against the whistleblower who first brought the July call to light. They’ve also sought to deflected by directing unfounded ire at the Trump-appointed inspector general of the intelligence community, who deemed the whistleblower’s complaint “credible.” And in perhaps their most predictable move, Trump allies have returned to the deepest well of right-wing paranoia: Hillary Clinton’s emails.

The whole reason behind whistleblower protections is so government officials can report wrongdoing without fear of retaliation. Yet Trump and Republicans would now like to discredit the individual and destroy his or her reputation right out in the open. Trump threatened to retaliate against a witness in plain sight with recent comments about “what we used to do in the old days” to “spies and treason.” Trump then declared on Twitter that he wanted House Intelligence Committee chair Adam Schiff "questioned at the highest level for Fraud & Treason."

Rep. Adam Schiff illegally made up a FAKE & terrible statement, pretended it to be mine as the most important part… https://t.co/zRmd9IRWOX
— Donald J. Trump (@Donald J. Trump)1569845567.0

Members of Congress have had  to tell the president explicitly to stop making death threats.

Trump has since asserted that the whistleblower's complaint "is completely different and at odds from my actual conversation with the new President of Ukraine," adding, "The Fake Whistleblower complaint is not holding up."

Sen. Lindsey Graham, R-S.C., also insisted that "the transcript does not match the complaint.”

Sen. John Cornyn, R-Texas, said that “after a certain point," the complaint "doesn’t just allege facts, it really is kind of a dossier or political diatribe, so I think there are plenty of reasons to be skeptical.”

Republicans don't know who the whistleblower is. But they seem to believe that tearing down that person's credibility is the way to stand by their man.

Sen. Chuck Grassley, R-Iowa, has even suggested that the unknown person at the center of the Trump impeachment inquiry may not even deserve protection. “If they are not really a whistleblower, they don’t get the protection,” he said.

The role of the intelligence community is to speak truth to power, and there’s no question that Republicans’ latest comments will have a chilling effect. Trump's allies, however, appear ill-equipped to defend the president on the merits of the case.

House Minority Leader Kevin McCarthy, R-Calif., appeared to suddenly come to the realization that Trump had committed a crime during a “60 Minutes” interview on Sunday, suggesting that he had not  bothered to do his due diligence and read the White House transcript of the call before agreeing to go on TV as Trump's defender.

That didn’t stop him from joining Rep. Devin Nunes of California, the top Republican on the House Intelligence Committee, and Rep. Jim Jordan of Ohio, top GOP lawmaker on the House Oversight Committee in writing to IC Inspector General Michael Atkinson, who will testify in a closed session before the panel next Friday. The Republican congressmen alleged that whistleblower reporting requirements were suspiciously loosened so that non-firsthand accounts would be accepted. Republicans suggest the rules were changed to accommodate the whistleblower.

“The timing,” McCarthy, Nunes and Jordan wrote to Atkinson, “raises questions about potential connections to the whistleblower’s complaint.”

“Whistleblowers were required to provide direct, first-hand knowledge of allegations,” read a Saturday tweet by McCarthy. “But just days before the Ukraine whistleblower came forward, the IC secretly removed that requirement from the complaint form.”

A few short hours later, the IC IG released a statement noting that while a change had been made to the form, it was made more than a year earlier to accurately reflect existing law, which is that first-hand knowledge is not required.

“The whistleblower submitted the appropriate Disclosure of Urgent Concern form that was in effect as of August 12, 2019, and had been used by the IC IG since May 24, 2018,” the statement noted. “The whistleblower stated on the form that he or she possessed both first-hand and other information. The IC IG reviewed the information provided as well as other information gathered and determined that the complaint was both urgent and that it appeared credible.”

The Republican National Committee has tried to shift the attention away from Trump by pointing to unfounded allegations about Joe Biden’s dealings with Ukraine as vice president. Sen. Ron Johnson, R-Wis., said Trump has a responsibility “as the head law enforcement official of the nation” to look into Biden’s Ukraine connections

Meanwhile, on Monday evening it was reported that Secretary of State Mike Pompeo had listened in on Trump’s call with Zelensky, which if true would make his answer to ABC News’ Martha Raddatz last week a lie. We also revealed that the State Department has evidently begun work on a massive probe into the email practices of Hillary Clinton’s former staffers in Foggy Bottom.

When a whistleblower perfectly follows the legal process of reporting a complaint and having it evaluated by a nonpartisan entity, exposing a scandal that keeps on getting worse, Republicans effectively have no response. Except, of course, to claim that every single person making accusations against Donald Trump is a liar, a cheat and a traitor. Doesn't that seem a little like projection?